Most people are in the dark about Lynch syndrome, a not uncommon condition that predisposes individuals to cancer. Patient advocacy group AliveAndKickn works to illuminate the issue.
BY Beth Fand Incollingo
PUBLISHED March 20, 2020
Many have heard of the BRCA gene mutation, which predisposes one in 400 people to cancers including breast, ovarian and prostate.

Less familiar but more common is Lynch syndrome, which occurs with an inherited mutation in any of about half a dozen genes that play a role in DNA repair. Individuals with Lynch syndrome are especially susceptible to developing colorectal and endometrial cancers and also face an increased risk of stomach, breast, ovarian, small bowel, pancreatic, prostate, urinary tract, liver, kidney and bile duct cancers.

“The most recent studies show that one in 279 individuals has the Lynch mutation. Over 95% of them don’t know it,” says Robin Dubin, who co-founded AliveAndKickn (aliveandkickn.org), a Lynch syndrome patient advocacy group, with her husband, Dave Dubin, who has the condition and is a two-time survivor of colon and kidney cancers.

In honor of Lynch Syndrome Awareness Day on March 22, the couple sat down with CURE® to discuss the inherited condition and what people should know about diagnosing it and treating associated cancers.

CURE®: What prompted you to form AliveAndKickn?

Robin Dubin: We started AliveAndKickn in 2012. Dave got a colon cancer diagnosis in 1997 at age 29, and we knew there was a family history, but genetic testing for Lynch syndrome wasn’t routinely available yet. It wasn’t until 2007, when he received a second diagnosis, that he got genetic testing done and found out about Lynch syndrome, which we had never heard of.

That’s when Dave started getting involved with advocacy and quickly realized that there were no patient resources or awareness efforts completely focused on Lynch. With his voice and storytelling abilities, we felt it would make sense for us to focus on Lynch syndrome. We’ve been working hard ever since to provide ways for patients with Lynch syndrome to connect with researchers, as well as to partner with other organizations to provide resources and support and build awareness and education. 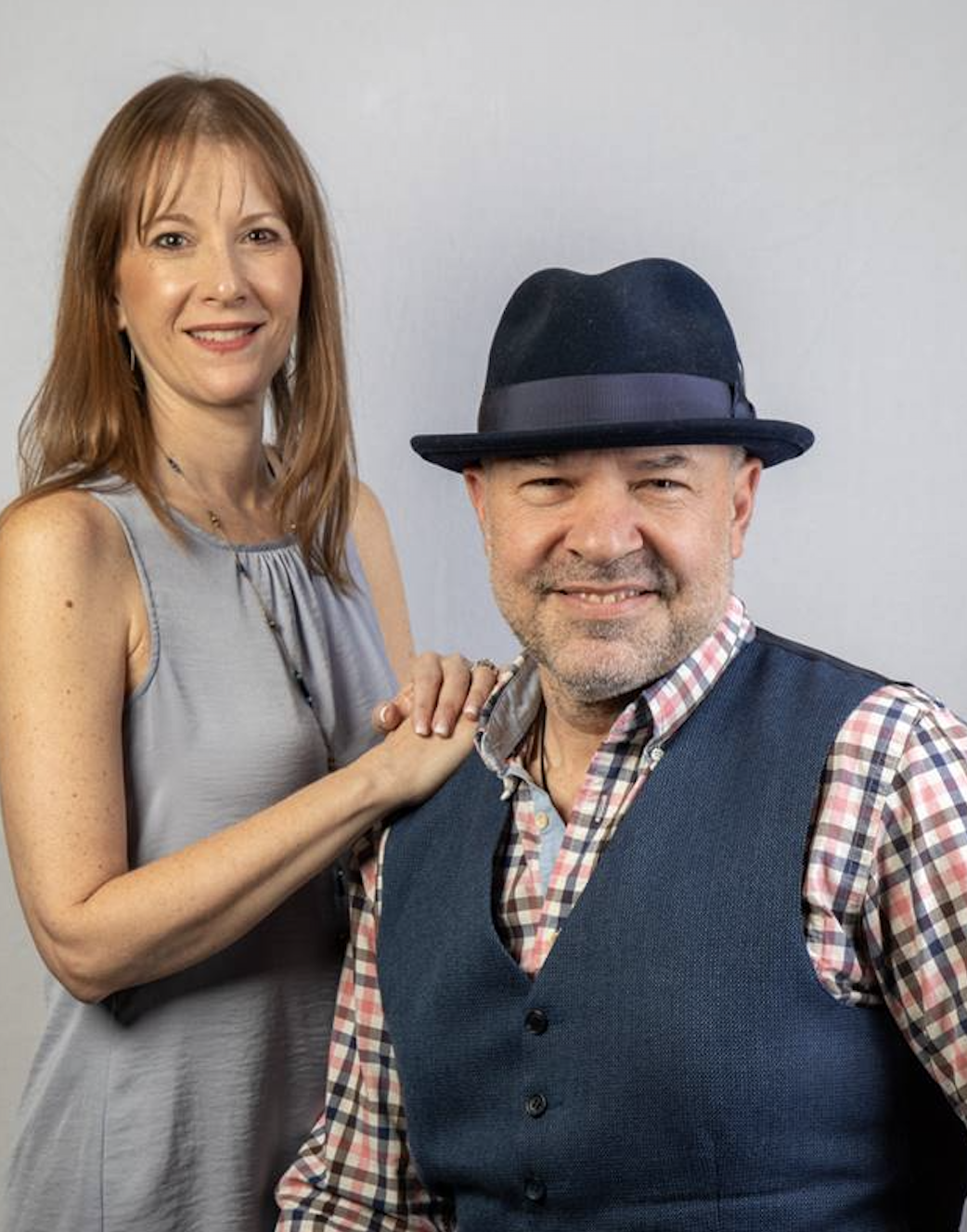 Dave Dubin: Before we founded the organization, our first effort was a backyard barbecue that we held four years in a row, and the name of the event was Dave’s Not Dead Yet. Robin didn’t like that name. I was always a soccer player and, as I’ve gotten older, I have become more of a coach than a player. I felt that the name AliveAndKickn was appropriate, considering the number of surgeries and diagnostic tests I’d been through while continuing to play and coach the game I loved.

How is your organization raising awareness about Lynch syndrome?

Robin: We held an event in fall 2019 that brought together a dozen patients with Lynch syndrome at The University of Texas MD Anderson Cancer Center in Houston for roundtable discussions with researchers and clinicians. We educated the patients, did advocacy training and captured their stories on camera. We’ll enable them to use that content on social media as they talk about their personal and family stories.

We did that project with one of our national partners, the Colon Cancer Coalition, and with them we’re working on a co-branded microwebsite, livingwithlynch.org, where we’ll post all the video content. A lot of it will be set up as educational pieces. For example, one will talk about genetic testing and another about risk-reducing surgeries.

We also recently launched a podcast. Dave has been spending some time doing interviews with various patients who have Lynch syndrome, doctors, clinicians and researchers in the field, and we’ll continue to add episodes. We also have an annual spring fundraising cocktail reception in New York City, the Blue Genes Bash.

Finally, we have a patient registry that collects medical and genomic data for researchers to use in studies, and we expect to expand the type of information collected soon.

Who should be tested for Lynch syndrome and when?

Robin: Currently, the majority of people get tested for Lynch syndrome and other hereditary cancer genes after a cancer diagnosis, and then the rest of their family members hear about it and get tested, too. We need to figure out how to get more people tested at the primary care level based on family history alone, before they get cancer. That’s because most Lynch syndrome cancers are early onset, with people getting colon or endometrial cancer in their 20s, 30s or 40s, and to change the outcomes and improve their care, they need to know about this before they get cancer.
In an ideal world, everybody who walks into a primary care doctor’s office for an annual physical should be filling out a family history questionnaire and having a doctor determine if they meet the criteria to be referred to a genetic counselor. That’s not happening, for the most part.

How do prevention and treatment strategies change when patients know they have Lynch syndrome?

Robin: When someone has Lynch syndrome, they’re dealing with a chronic condition that needs to be monitored, screened and scanned every year.
If someone knows they have Lynch syndrome and they get a diagnosis of colon cancer, often doctors recommend total versus partial colectomy (surgical removal of the colon) because these patients are at higher risk of getting colon cancer again. But most of the time, Lynch syndrome testing is done after surgery, so patients don’t have the option of making that decision.

Dave is a perfect example. In 2007, he had colon cancer for the second time. He had surgery and they removed another section of colon, but he still has 18 inches left. It was only after the surgery that he got genetic testing done and found out about Lynch syndrome. If we’d known, they probably would have recommended removing all of his colon.

When it comes to treatment, it’s also crucial for patients to know that nearly all tumors associated with Lynch syndrome are microsatellite instability (MSI) high. This means that the cancers have trouble repairing their own DNA after it’s damaged, and it makes them good candidates for treatment with immunotherapy.

Some immunotherapies are approved by the Food and Drug Administration for MSI-high tumors regardless of their location in the body, for use after chemotherapy has stopped working. But studies now suggest that platinum-based chemotherapies don’t work for patients with Lynch syndrome and can actually be detrimental. At academic cancer centers that are doing lot of immunotherapy clinical trials, patients with Lynch syndrome are now getting these drugs as earlier lines of treatment.

What kind of testing do patients need to determine whether they have Lynch syndrome?

Robin: Germline testing, which looks for inherited cancer-causing mutations in the patient’s DNA, usually involves a blood or saliva sample test for Lynch syndrome genes or a panel that can identify 30 to 40 hereditary cancer genes, including Lynch and BRCA mutations.
MSI status and other mutations that are specific to the cancer, not the person, are found by doing a different kind of test on the tumor itself. Often, what happens first is that someone’s tumor is tested and found to be MSI high, and then doctors say that this indicates a potential Lynch mutation, so they’ll order germline testing for Lynch syndrome.

All tumors should be tested for MSI-high status, but, unfortunately, that isn’t always done. Especially when care is given outside a major cancer center in a community hospital setting, someone could be diagnosed with early age-onset colon cancer and be prescribed standard chemotherapy and surgery without ever being tested for MSI status or Lynch syndrome.

Dave: Very frequently, people have their cancer treated and still don’t know they have Lynch syndrome. Even in the most obvious cases, many young adults with colon cancer don’t get genetic testing. When you ask someone if they’ve had it, they often say “I think so” or “maybe.” It’s easily confused with a standard complete blood (cell) count or tumor testing.

Robin: A lot of people are told by their doctors that their tumor was tested, but they aren’t told what kind of tests were done, and they assume that means they’re OK and there’s nothing further to look at. If they want to be sure, they can check their pathology report, which should specifically state whether the tumor was tested for mismatch repair.

How can patients protect themselves?

Robin: Patients with cancer, survivors and their relatives need to have conversations with their doctors about family history, and they can even mention that evidence of Lynch syndrome is sometimes not as obvious as you’d think. It could be that a patient’s grandmother had endometrial cancer and great-grandfather had colon cancer or the patient’s mother had ovarian cancer and grandfather had colon cancer. It’s important to talk to doctors and ask if that warrants referral to genetic counseling.

In what ways can people support AliveAndKickn’s work?

Robin: We have opportunities for patients to tell their stories through our podcast and a share-your-story forum on our site, and we’ll go forward with more Living With Lynch patient gatherings like the one at MD Anderson — hopefully, annually.
We offer a lot of opportunities to get involved through the Colon Cancer Coalition, which runs Get Your Rear in Gear 5K races around the country. People can sign up on our site to be Lynch syndrome patient advocates at local races. They can man a table where they talk about Lynch syndrome and genetics with members of the colon cancer crowd.
Be the first to discuss this article on CURE's forum. >>
Talk about this article with other patients, caregivers, and advocates in the Colorectal Cancer CURE discussion group.