Copyright © 2019
CURE Media Group.
All rights reserved.
Cure Media Group, LLC. All Rights Reserved.
CURE does not provide medical, diagnostic, or treatment advice.
Currently Viewing
What Do Space Shuttles and Cancer Have in Common?
October 27, 2015
Mammograms Should Be a Woman's Choice
October 26, 2015
The Harsh Realities of Long-Term Illness
October 26, 2015
Informing the Patient of a Test Result
October 23, 2015
Cancer Beginners: Tips from a Two-Time Survivor
October 23, 2015
Leukemia's Lionheart: The Fight of a Lifetime
October 21, 2015
Zen and Male Breast Cancer: Where the 'C' Word Meets the 'Z' Word
October 21, 2015
Celebrating Milestones and the Doubts That Linger: (Almost) Three Years Cancer-Free
October 20, 2015
Like Mother, Like Daughter: When Breast Cancer Bonds
October 19, 2015
The Sweet Spot: A Runner Adjusts to Life After Cancer Treatment
October 19, 2015
Print

What Do Space Shuttles and Cancer Have in Common?

Kevin realizes that the trauma caused by losing space shuttles turns out to feel a lot like finding out you have cancer — only lonelier.
PUBLISHED October 27, 2015

Kevin Berry is an 13-year mantle cell lymphoma survivor, in his third remission. He works on Human Spaceflight programs, is a freelance writer and editor, and supports newly diagnosed patients through his ministry, Taking Vienna. He lives in Central Florida with his wife and adult children.

I have the best job in the world. Over the last 36 years, I’ve worked on three human spaceflight programs at the Kennedy Space Center. I’ve worked with dozens of flight crew members (our term for astronauts); spent hundreds of hours around — and often inside of — all six shuttles; supported some of the most famous spacecraft ever launched including the Hubble Space Telescope, the Magellan Venus orbiter, and the Galileo Jupiter orbiter. I’ve worked on International Space Station modules and helped build the Orion capsule.

The people I’ve worked with are everything the public expects NASA to be: incredibly smart, extraordinarily motivated and infused with excellence. We are driven to perfection, intolerant of mediocrity and merciless in solving failures. 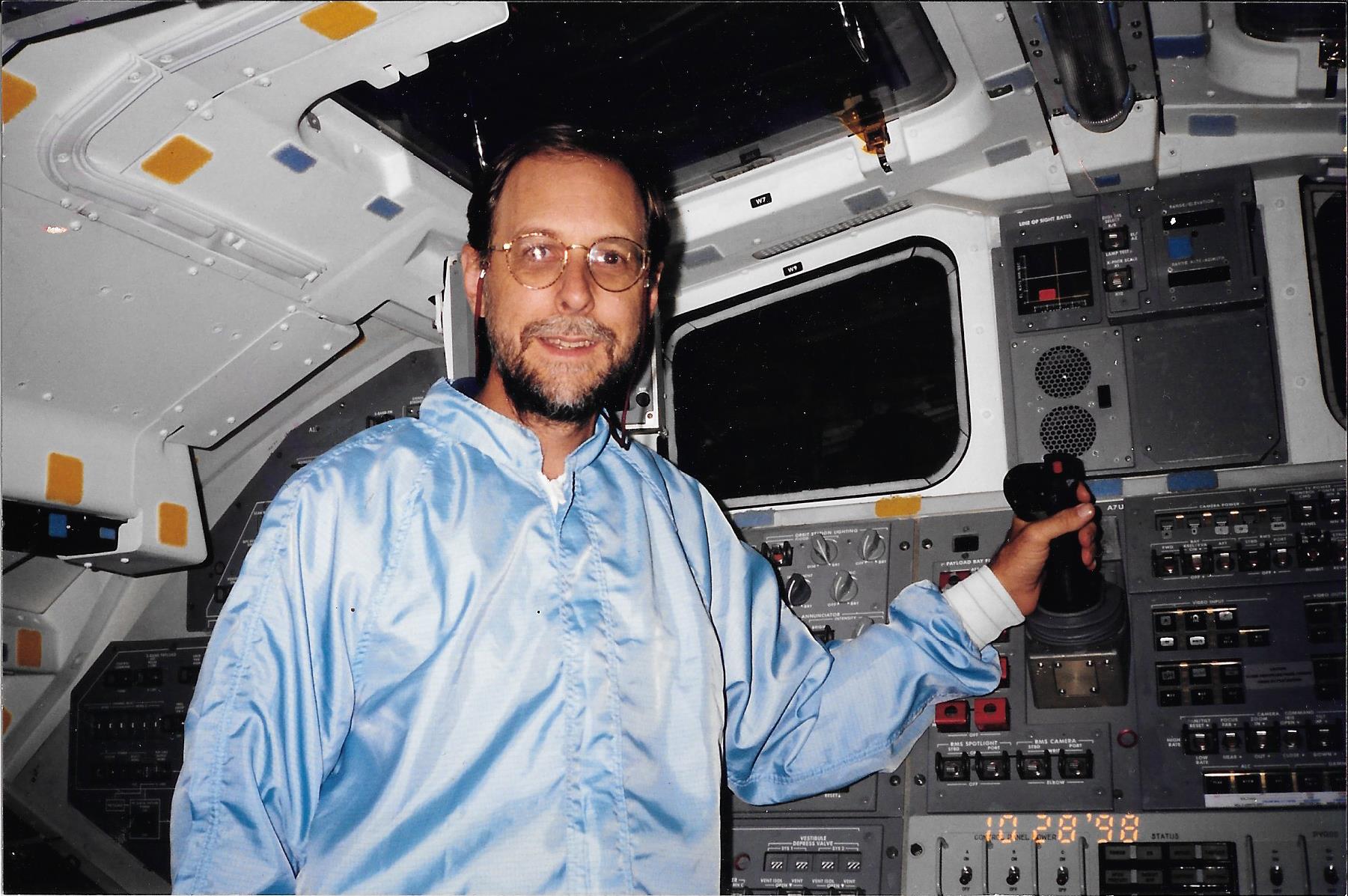 On the flight deck of the Orbiter Atlantis, in a rare shot without an “eyes only” hood or gloves. Due to my excessive hairiness, I was normally required to wear a hood whenever on board!

Sadly, I’ve had to experience the bad times as well: I worked on both Challenger and Columbia’s last missions; and as part of the team recovering debris in East Texas. During that effort, we lost a helicopter from my team. Two were killed and three were injured. These experiences were deeply traumatic to me personally, as well as for the whole spaceflight community.

Receiving a cancer diagnosis is, of course, also traumatic. Mine came in November 2004, when I was told I had mantle cell lymphoma. Then, after a five-year remission in 2012, I was told that it was back.

The human psyche is wired in a way that traumas like these hit hard, deep and last forever. We all remember where we were when we received bad news: assassinations, terrorist attacks, notification that a loved one has been in an accident or died. After too many of these gut punches, and lots of chemo chair time to reflect, I’ve come up with a term for these events: "When our dreams of immortality die.”

Most (but sadly, not all) children think they will live forever. Adults, while we acknowledge and plan for eventual death, don’t internalize it until the possibility smacks us in the face. Whether it’s the loss of a parent, a national tragedy, or a serious illness, the back of our brain suddenly realizes that death is a real thing. Part of your brain thinks dying is a really, really, bad idea, and it lets the rest of the brain and the body know it: The cold rush of adrenaline, dazed visage and refusal to accept the facts are normal responses to traumatic news.

There are long term effects, too. It’s been 29 years since Challenger’s last launch and 12 since Columbia’s failed landing. Yet, to the workers at Kennedy Space Center, these events are still in the immediate past. This was driven home to me last week. The Kennedy Space Center Visitor’s Center just opened an exhibit honoring the crews lost in these disasters and our management team was invited to a special tour. As we entered the doors, one of my colleagues, a (literally) grizzled program veteran, stopped and turned around.

“I just can’t do this. It hurts too much,” he mumbled and pushed back up the line.

Most of us got sick to our stomachs when viewing the debris or remembering the feeling we had watching smoke trails in the sky.

Time doesn’t dull the feelings of cancer survivors, either. How many of us shudder when we visit the oncologist’s office, even after many years in remission. Even after nearly a year, I get a sick feeling when I go to the chemo room for my monthly port flush. I still avoid visiting the unit where I had my first transplant, although I did convince myself to take a fast “fly through” the floor where I had my second.

Who are we? We are the collection of our experiences, good and bad. Our personality is constantly shaped by events out of our control. After a decade of cancer, I’m not the Kevin I was at 48. I’m actually a much better, more empathetic, caring and helpful person now. For every horror I’ve experienced, I’ve had a dozen uplifting ones. For every friend I’ve lost, I’ve made ten more. I’ve had the benefit of a second education, supplementing my spaceflight knowledge with a hard-won expertise in cancer treatment.

NASA’s culture is also shaped by losses as much as successes. The Apollo 1 fire, the ground crew lost before the first shuttle flight, Challenger, Columbia and those lost recovering debris were sobering reminders of the cost of failure. Nine flights to the moon, over 130 successful shuttle flights and a space station occupied continuously for 15 years are major victories, but must be measured against the cost of 17 astronauts and five workers. Speaking very presumptuously for them, I think they’d say it was worth the fight. The words from the Columbia crew’s family became our litany in 2003 and 2004: “Find it, fix it, fly it.”

My victory over cancer is measured against the agony inflicted on my wife, children, family and friends; my fellow patients who fell along the way; and the terrific toll on our lifestyle. I must say, though, looking forward for the first time into 30 more years of life, instead of three, the price we paid was worth it. I don’t have a snappy six-word motto to sum up my battle ... but I plan to work on that. For now, I’ll go with this: “Staying alive: Worth the effort." Besides the other wonderful blogs on Cure, I hope you'll visit my Taking Vienna site. I also recommend T.J. and Jen Sharpe’s blog, Patient #1. For cancer patients and caregivers, and melanoma patients in particular, it’s a great resource. I also encourage readers to visit the Be The Match site to learn about registering as a potential stem cell donor.
Continue the conversation on CURE’s forum. >>
Talk about this article with other patients, caregivers, and advocates in the Lymphoma cancer CURE discussion group.