May the Circle Be Unbroken: Coping With the Trials and Tribulations of Cancer and Life 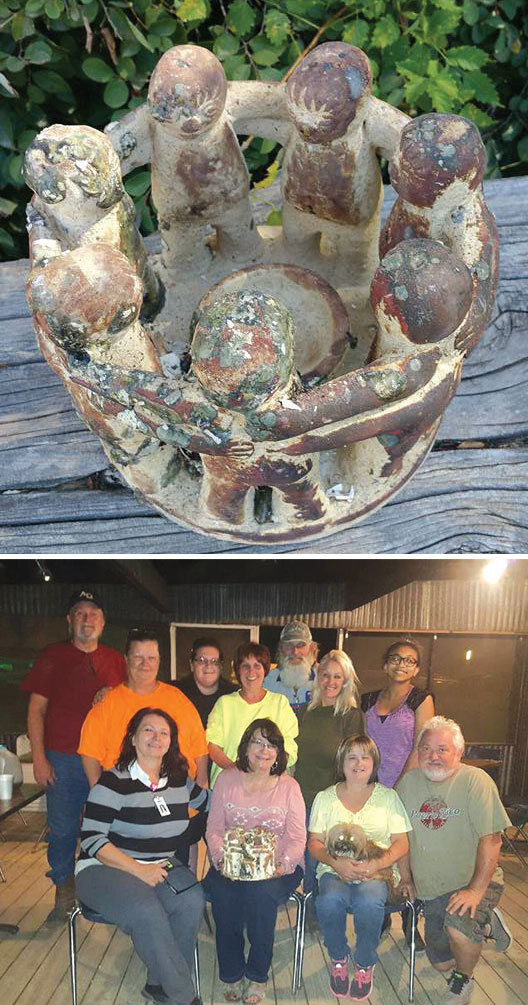 (Top) A statue of an unbroken circle of friends was pulled from the ashes of the fire near Lindley’s business. (Bottom) SUZANNE LINDLEY (second from right in front row) with friends from The Mountain.


Some led me to search for hope when hope seemed nonexistent, or put us on the path toward specific treatments when no others existed, like SIR-Spheres (radioactive beads that fight liver tumors caused by the spread of stage 4 colon cancer) and clinical trials. They offered me words of advice like “Life doesn’t happen around you, it happens between your own two ears,” comforting thoughts and photos that inspired hope and strength, diminished sadness and provided stability.

Cancer taught me to cope differently. I have learned to balance once seemingly insurmountable challenges with the everyday realities that a life-limiting illness brings. The little things, such as the laughter of my children, holding hands, a beautiful rainbow and even the sunrise and sunset create incredible joy. Life is fragile, and making memories is a priceless gift.

In our little community in Canton, Texas, many of our memories have been made on The Mountain, a slow-paced, pioneer-themed town bursting with unique little shops, home-style restaurants and bed and baths. It is a place for entertainment with gun fight re-enactments, singers, late-night shopping and family adventure. It is a magical place like no other, one that allows you to step back in time. Our family had a small bed and breakfast called Cedar Flats tucked halfway up the hillside.

Every day for the past two years, I’ve walked up Ridge Road on The Mountain and turned the corner to Cedar Flats. Stepping up the tree-lined path has brought not only me, but my entire family, true happiness. Our older girls have enjoyed the peace and quiet and the closeness of family. Our youngest daughter, Chloe, has found The Mountain to be a fantasia of magic and imagination. For me, The Mountain has been a retreat from cancer. I could go there and just be. It has been a place where I could live life fully and chase my dreams.

But just weeks ago, a day that started like any other changed our lives forever, much like the day I was diagnosed with cancer. On the 17th of October, 2015, our little haven caught fire and burned to the ground, along with 60 other businesses. The fire was one of the worst in Canton history. The unimaginable devastation has had a profound and far-reaching effect in this small community, touching the lives of all those who had owned businesses and those who had frequented them throughout the years.

The fire raged across The Mountain, replacing laughter and cheer with anguish and pain. I watched helplessly from the parking lot as the flames billowed in the air. It was horrible. At the same time, a dear friend who lives states away was surrounded by her family as they struggled to hold tight to her every last breath.

Huge, life-altering events were taking place for me that night. I watched the fire as it demolished so many dreams. I thought of my friend and her transition to heaven. The fire paled in comparison. I swelled with gratitude that no one was hurt and the realization that the loss of my buildings was small when placed next to the loss of a life. In those anxious moments, our lives seemed to stand still, yet the rest of the world was forging steadily forward.

Hope has emerged from the ashes of The Mountain fire, just as it has from my diagnosis with cancer. In the fire, no one was hurt. Lives were spared. Hopes and dreams will continue and The Mountain will rebuild, forever changed, but with greater strength, fortitude and determination.

I walked down the hillside a day or so after the fire to where Hoot Owl Café and Cedar Flats once stood and ran into Sy. He is one of our friends who had a shop in Horseshoe Bend. We reminisced and shed a few tears. He had a small box in which to place a few selective items. He turned to sift through the debris and only moments later tapped me on the shoulder.

He was holding a small statue that had survived the fire. As he brushed away the ash, he handed it to me. I held the figure tight. Our eyes locked as tears fell down my cheeks.

Through cancer and fire, one thing remains. It was now resting in the palm of my hands. In a hushed voice, Sy said, “It’s a perfect circle of friends, and it is unbroken.”
Be the first to discuss this article on CURE's forum. >>
Talk about this article with other patients, caregivers, and advocates in the Colorectal Cancer CURE discussion group.