Survivor guilt can be an obstacle for survivors of cancer.
BY Don Vaughan
PUBLISHED February 17, 2015
Losing friends to cancer can be devastating for patients whose treatment was successful.

After Karen Shanahan was diagnosed with stage 4 colon cancer in April 2007, she spent the next several years undergoing various types of treatment, including chemotherapy, microwave ablation, cytoablation and surgery.

Shanahan reached out early in her treatment and became close to several young mothers who also were diagnosed with colon cancer. Sadly, several of those friendships were cut by the disease. Shanahan has been in remission since the fall of 2011.

“In 2010, over the course of three months, I lost three individuals I cared deeply for and who were so inspirational to me,” Shanahan says. “I have lost almost all my stage 4 colon cancer friends at this point. When all are dying around you, from exactly what you have, you have to ask yourself why.”

Shanahan, a dental hygienist from Watchung, N.J., suffered what is commonly known as survivor guilt. “I was doing OK in terms of treatment. My tumors were responding, but I felt I didn’t deserve it,” she explains. “I felt ashamed to tell people I was doing well.”

At one point, Shanahan recalls, she and her husband posted some positive news on their blog regarding Shanahan’s progress, only to learn that a friend had just passed away from her cancer. Shaken, Shanahan removed the post. “I just felt so terrible,” she says.

Survivor guilt commonly affects individuals who have lived through a traumatic experience that took the lives of others, such as war, a natural disaster or a prolonged illness such as cancer, experts say.

“Sometimes when I still struggle, when I lose a friend, I have to let myself feel the guilt but know that if I stay there too long it isn’t healthy, and it isn’t honoring the friend I lost.” –Karen Shanahan

“Guilt can be multifaceted,” says Vicki Kennedy, a licensed clinical social worker and vice president of program development and delivery with the Washington, D.C.-based Cancer Support Community. “On one level, there is a sense of guilt that comes from others dying while you survived. There can also be feelings of guilt around the whole cancer experience, such as, ‘Am I a burden to my family?’ So there are many components to it. But it’s completely normal.”

Among patients with cancer, anecdotal reports suggest that women are more prone to developing survivor guilt than men, and that older patients, in general, usually have better coping mechanisms, says Jennifer Klemp, director of cancer survivorship at the University of Kansas Cancer Center in Kansas City and associate professor of medicine in the Division of Clinical Oncology there. “They tend to have met more of their life goals,” she explains. “When you look at the data, younger women have a harder time with coping and developing strategies so they can function to the best of their abilities.”

Common indicators of survivor guilt include depressive symptoms, anxiety and rumination. “Obviously, those symptoms can somaticize to poor sleep, concentration and job performance, and disruption of personal relationships,” Klemp says.

Survivor guilt is considered a symptom of someone’s reaction to a situation and does not necessarily rise to the level of a pathological disorder or diagnosis, adds Michelle B. Riba, a professor and associate chair in the Department of Psychiatry at the University of Michigan, and director of the PsychOncology Program at the University of Michigan Comprehensive Cancer Center. Still, it’s time to seek help when survivor guilt gets in the way of everyday activities, such as sleeping and eating, for more than two weeks. “If a person is not doing well with it and also has depression and other issues, they may be evaluated by a doctor or a therapist,” she says.

While large cancer centers often survey patients via questionnaire about whether they are experiencing distress, the forms do not ask specifically about survivor guilt, Riba continues. However, if patients report that they are experiencing distress and then accept help in dealing with it, counselors are likely to sniff out the problem. Counselors who work with cancer patients are sensitive to the signs, including frequent comments about other patients who did not survive, expressions of sadness or guilt, or an inability to enjoy life because others are suffering, Kennedy says.


Laura Starr, of San Diego, remembers having some of those feelings after her cancer went into remission. 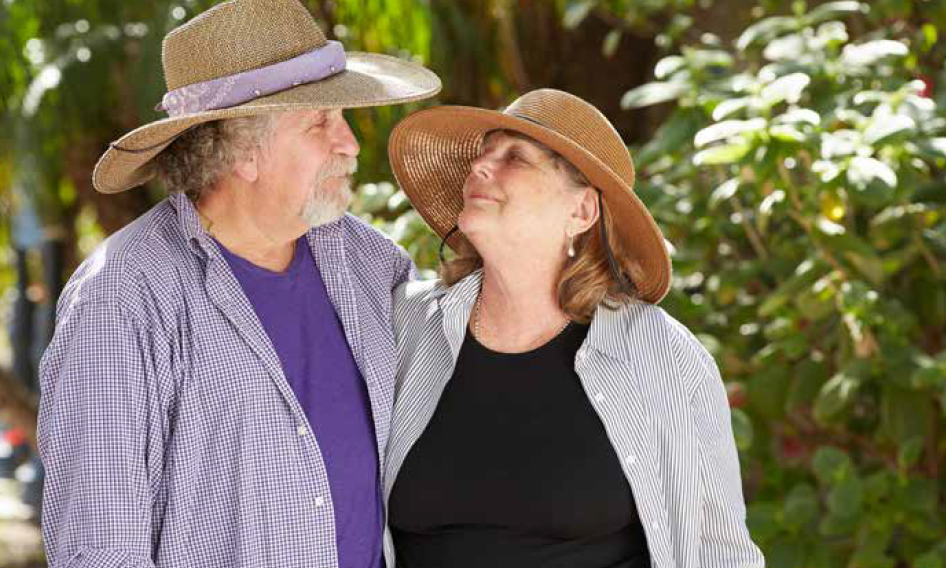 Laura Starr, seen here with her husband, Don Starr, befriended others with cancer while being treated for metastatic melanoma. She experienced survivor guilt when some of those friends died. Photo by Rob Andrew.
Starr was diagnosed with metastatic melanoma in 1985 and, like many cancer patients, developed friendships with those she saw regularly during treatment. She was stricken with survivor guilt when many of those friends passed away. Depression, she says, was one of her primary symptoms.

“We develop depression when we feel we have no control over a situation,” Starr says. “Not only did I feel I had no control over helping the people I cared about, but it also made me think, ‘Well, the cancer could come back at any time, and no one could help me, either.’”

THE EFFECTS OF SURVIVOR GUILT

The anxiety, depression and other issues commonly associated with survivor guilt can have an adverse effect on a cancer patient’s treatment and recovery.

“When someone you have seen weekly during chemotherapy dies, some people may question whether they are worthy of continuing,” says Donna M. Pisano, a psychologist in private practice in Flagstaff, Ariz., and a volunteer with the Cancer Hope Network. “They may wonder, ‘Why am I here and they are not?’ Unfortunately, I have heard of people not showing up for chemo anymore, or becoming so negative that their chemotherapy side effects worsen.”

“What is really influential is how much psychosocial or life-role disruption (such symptoms) can have,” agrees Klemp. “Severe depressive symptoms or the somatization of psychosocial issues into physical issues can disrupt the day-to-day function of patients getting to treatment on time or taking their medications. Addressing psychosocial issues, in particular the stages of grief, can definitely impact the physical piece.”

Survivor guilt can also affect a cancer patient’s relationship with family, friends and health care providers, adds Klemp. Depression or anxiety, for example, may cause a patient to shut down, or exhibit anger or frustration. “As with any other type of psychosocial disruption of life, survivor guilt can affect a patient’s depressive symptoms, anxiety, all of that, which affects their relationships,” Klemp notes. “And people get burned out by that. People try to be helpful, but it is often hard to meet expectations or needs, so survivor guilt can obviously affect the family system.”

Caregivers can help, but sometimes need direction from the survivor, Klemp says. One concrete way to help is by ensuring that survivors have access to support organizations or supportive therapy.

A variety of treatment options are available for patients and family members who develop survivor guilt.

“Sometimes we set up non-homogeneous groups so that patients do not compare themselves to others with the same condition, and therefore we try to minimize the sense of survivor guilt,” Riba says. “We also don’t have ‘closed’ groups, in that new members are added on a regular basis so that patients have others joining and adding to the group.”

In addition, anti-anxiety medications or antidepressants can help with physical symptoms.

“I think the best thing you can do is find something in your life that you always wanted to do, but never did. It could be joining a book club or volunteering, which is a great way to stop thinking about yourself.” – Laura Starr

Many patients also find value in journaling their emotions, Kennedy adds. Alternatively, survivors of cancer often come up with solutions that work specifically for them.

Shanahan sought to alleviate her survivor guilt by volunteering with the Cancer Hope Network, where she counsels others going through a similar experience. The results, she says, have been significant. “

Volunteering did two things,” Shanahan reports. “First, it took me outside myself by helping someone else. Secondly, the most amazing thing happened: The people I spoke with were so happy that I was doing well. This love and encouragement from people who many times were not doing well themselves—some were dying—blew my mind. My shame slowly started to melt away with the love of these courageous and giving people. I know now I can honor the lives of my friends whom I have lost by not being ashamed of being alive.”

Now, if a friend dies, Shanahan allows herself to grieve but tries not to delve too deeply into guilt.

“Sometimes when I still struggle, when I lose a friend, I have to let myself feel the guilt but know that if I stay there too long it isn’t healthy, and it isn’t honoring the friend I lost,” she says.

Starr also found that taking action helped her to calm her feelings of guilt.

“I think the best thing you can do is find something in your life that you always wanted to do, but never did,” she says. “For me it was art, but it could be joining a book club or volunteering, which is a great way to stop thinking about yourself.”
Be the first to discuss this article on CURE's forum. >>
Talk about this article with other patients, caregivers, and advocates in the Psychosocial Issues CURE discussion group.