TV star Shannen Doherty discusses some of the rough times she went through during her breast cancer battle.
BY Beth Fand Incollingo
PUBLISHED August 26, 2016 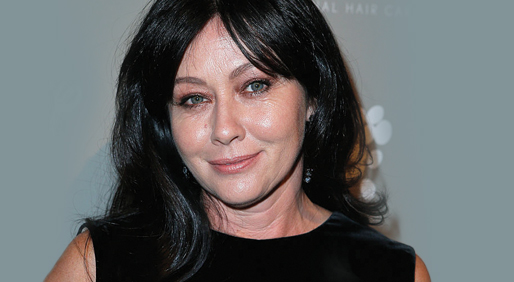 The 45-year-old actress, who also starred in the late-1990s TV show “Charmed,” used Instagram to share six black-and-white photos of herself shaving her head, which she did after her hair started falling out due to treatment with chemotherapy. The photos showed her with her mother, Rosa Elizabeth Doherty, and two friends, Anne Marie Kortright and Chris Cortazzo, all on hand to offer their support.

“Thank you to these three who helped me thru an impossibly tough day and continue to be there every minute supporting and loving me,” Doherty wrote in her message. She also gave a shout-out in the Instagram message to her husband, photographer Kurt Iswarienko, who was out of the country the day she clipped her hair.

Doherty publicly revealed in August 2015 that she had invasive breast cancer that had metastasized to at least one lymph node. In a televised February interview with Dr. Mehmet Oz, she explained that the cancer is estrogen receptor-positive, and that doctors were working to shrink the tumor with hormone-blocking medication before she moved on to surgery. Then, on Aug. 1 of this year, Doherty revealed to Entertainment Tonight that the cancer had spread to more than one lymph node, and possibly beyond. She underwent a single mastectomy in May, has been treated with three of eight planned rounds of chemotherapy, and will follow that with radiation treatments, she said.

The revelation that Doherty had cancer emerged in legal documents when she sued a former business manager, claiming the manager had failed to pay her health insurance premiums, allowing her coverage to lapse. She claims that her cancer spread when she was uninsured and not receiving medical checkups, and that aggressive treatment might otherwise have been avoided. The management group has refuted Doherty’s claims that it holds any responsibility for her condition.

In an interview with Entertainment Tonight in February, Doherty expressed concern that her illness would get in the way of her career, saying that some assume she’s unable to work, and noting that her medications have caused her to gain weight, something she said is frowned upon in her industry.

At the time of the ET interview, Doherty said she expected to star this year in a film titled Bukowski, directed by James Franco, and also in Kevin Smith’s Mallrats 2. In an online interview in June, Doherty said she was still pursuing those projects.
Be the first to discuss this article on CURE's forum. >>
Talk about this article with other patients, caregivers, and advocates in the Breast Cancer CURE discussion group.