When does a patient become a survivor of cancer? Some believe it’s at the moment of diagnosis, but others disagree.
BY JEN SOTHAM
PUBLISHED November 04, 2017 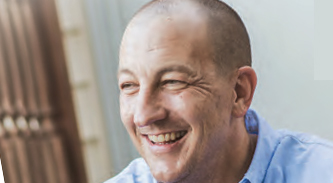 JOHN FISHER, survivor - PHOTO BY JAMIE ORR
If you had asked John Fisher whether he considered himself a survivor of cancer immediately following his bladder cancer diagnosis in 2014, he would have said no.

“I would not have classified myself as a cancer survivor because I hadn’t been treated yet, and I didn’t know what the outcome would be,” says Fisher, 46, a technology specialist for a school district in Cedar Rapids, Iowa. “I always thought of a cancer survivor as someone who had beat it, and I never pictured cancer as this ongoing thing, living treatment to treatment, scan to scan.”

Cancer being an “ongoing thing” is a recent phenomenon. In the dark ages of treatment, when the diagnosis was synonymous with an imminent death sentence, the notion of a survivor was a person who had lost a loved one to cancer, as in “Jane is survived by her husband, Jim.” With improved medical interventions and chances for prolonged survival, the term shifted. For many years, the accepted biomedical definition of a survivor was: “an individual who has had a life-threatening disease but has remained disease-free for a minimum of five years.” In retrospect, many believe that those criteria failed to account for the variability in the course of different types of cancers and among individual patients, and the sudden impact cancer has on a person’s life.

The founding of the National Coalition for Cancer Survivorship (NCCS) in 1986 was the catalyst for an update of that definition, says Julia H. Rowland, Ph.D., director of the National Cancer Institute’s Office of Cancer Survivorship. It proposed that “an individual may call him or herself a survivor from the moment of diagnosis and for the balance of one’s life.” Today, this remains a widely accepted definition of the term.

“At the time NCCS was established, the definition of who was a cancer survivor was that used by the medical community and referred only to those individuals who had remained disease free for five years,” Rowland says. “In 1986, however, more than 50 percent of those diagnosed could expect to be alive in five years, and the percentage was even higher among those diagnosed as children. The coalition’s founders argued that people could not put their lives on hold for five years (while waiting to see if they would live to become survivors). Decisions about valued goals and desires needed to be discussed before treatment started.”

AN ARRAY OF OPINIONS


For Betsy Stein, a 42-year-old New Yorker who works in finance, making the transition to calling herself a survivor of cancer was quite a jump. Stein, who has been treated for three types of cancer, was first diagnosed with thyroid cancer in 2009, which was fully treated with a thyroidectomy.

“It was a one-and-done situation. I didn’t even consider myself a cancer patient back then,” she says.

Her second cancer diagnosis was not as cut-anddried. In 2015, Stein learned that she had melanoma that had metastasized to her liver, lungs, jejunum (part of the small intestine) and brain, and was given a very grim prognosis.

“I remember being in the hospital, looking out over the East River and contemplating the fact that I was told I could have as little as three weeks to live,” she says. “I mentally fought it with the mantra, ‘This can’t be it. It’s not over.’ I knew I had so much more living to do.”

Stein was treated with Gamma Knife radiosurgery, which is a precise form of radiation therapy, and put on Zelboraf (vemurafenib), a targeted drug commonly used to treat melanoma that expresses the BRAF gene mutation. When she came out the other side with most of the cancer gone, Stein began to identify herself as a survivor of cancer.

On top of several recurrences of her melanoma, Stein was diagnosed with lung cancer in 2016. She has undergone chemotherapy, surgeries and additional Gamma Knife treatments, and has had periods where she was without evidence of disease. Despite her illnesses and treatments, she maintains a positive attitude and has managed to squeeze in trips to Alaska, Mexico, Spain, the Dominican Republic and, most recently, Sri Lanka.

“I have to do what I have to do during periods of illness so that I can return to normalcy and have a good life,” she says. “I don’t want to live in a cancer bubble.”

Today, despite the fact that he is still undergoing treatment, John Fisher also identifies himself as a survivor of cancer. It was the simple act of making an appointment that empowered him. After a recurrence in 2015 that led to a risky surgery and subsequent radiation, Fisher decided to meet proactively with a doctor at the University of Iowa Holden Cancer Center’s research department to explore his options.

“Instead of sitting around and waiting for it to come back, or letting my doctors dictate everything, I was taking my diagnosis into my own hands,” he says. “That was when I decided that I am a cancer survivor! I think the revolution in cancer medicine right now is changing a lot of the traditional definitions of survival. I am encountering more and more fellow patients who may never be cancer-free for five whole years, but may still be alive into their 80s or later, happy and otherwise healthy. I used to think of ‘cancer survivor’ as meaning someone who had experienced cancer and then, after treatment and time, was proven to be cured. I now know how a cancer diagnosis and treatment affects someone physically and emotionally, as well as their caregivers. I think anyone going through that with the will to keep fighting, in spite of what odds they are given, is a survivor.

The truth is that, although the language used by society and the medical community may be updated to reflect advances in treatment, opinions about when and to whom the term “survivor” applies are as individual as the people affected by cancer — and may change as people continue to live with their disease. “It is important to note that, when the NCCS founders proposed their new definition, they never meant for it to become a label,” Rowland says. “Rather, their goal was three-fold: to eliminate the then widely used term ‘victim’ for someone with cancer; to provide hope for those diagnosed that there was life after cancer; and, most importantly, to change the dialogue.”


According to the American Cancer Society, more than 15.5 million children and adults with a history of cancer were alive on January 1, 2016, in the United States. It is estimated that, by January 1, 2026, the population of survivors of cancer will have increased to 20.3 million. The changing face of the disease has encouraged the cancer community and society at large to expand the lexicon used to talk about the disease. However, many feel that there is still work to be done in order to update the language people use to discuss survivorship.

Robert Carlson, M.D., a breast cancer specialist and CEO of the National Comprehensive Cancer Network (NCCN), advocates using a less static term. “Use verbs!” Carlson suggests. “‘Cancer survivor’ is a label, while life after a diagnosis is really a process of facing mortality, dealing with short-term and long-term side effects of the cancer and its treatment and facing ongoing societal issues of having had cancer,” he says. “‘Cancer surviving’ is an active, ongoing process, and is my preferred term.”

As for when and to whom the term applies, Carlson agrees with the definition of survival as starting at diagnosis. “For many cancers, the course of treatment may span many years, even more than a decade, without any evidence of disease,” he says. “Where in the timeline should the individual be identified as a ‘cancer survivor’ or as ‘cancer surviving?’ The straightforward solution is to start the timeline at diagnosis.”

PLANNING FOR THE FUTURE


When it comes to planning for care during survivorship, the standard recommendation is to create a plan that describes suggested follow-up care and who should provide it. The Institute of Medicine’s 2006 report “From Cancer Patient to Cancer Survivor: Lost in Transition” outlines four essential components of a survivorship care plan: surveillance for recurrence or a new cancer (close to 19 percent of new cancers diagnosed this year will be in individuals who already have had a cancer diagnosis); screening and intervention for consequences of cancer and its treatment (for instance, persistent physical, psychological, social or existential effects of illness); prevention of late-occurring cancer or other conditions, including use of techniques to support health; and plans for coordination of recommended care going forward.

“The advocacy community initially wanted these documents to be generated at the time of diagnosis and modified across the course of care. However, in most settings today, these documents are being generated at the end of acute treatment,” Rowland says. She believes it is critical that patients be their own advocates, engaged in the creation of their own survivorship plans.

“Self-advocacy doesn’t mean making all of the decisions yourself,” she says. “Sometimes it means delegating — (as long as you’re) not abdicating.”

Rowland also asserts that the cancer community should gravitate toward a more holistic approach. “We talk so openly about the medical and physical aspects of survivorship. Cancer has a huge psychosocial impact, and the psychosocial aspects are still put on the back burner,” she says. “The survivorship movement is about achieving good quality of life whether you are living with, through or beyond cancer. Let’s make it as full and rich and important as we can.”

Stein is accomplishing that by looking forward with gratitude.

“Survivorship is an amazing place to be,” she says. “It’s a gift, in a way, because it forces you to reflect on what you really want out of life. As awful as cancer has been, surviving cancer has been a positive experience that helped me change my life for the better.”

Fisher feels that his continued survival allows him to live more in the present.

“I’ve always had a natural inclination toward worry, despite the fairly privileged upbringing and good life I’ve had, and I’ve had anxiety issues since I was a little kid, so I’ve spent time in therapy,” he says. “When I was diagnosed, all of those things that I learned in therapy, and about mindfulness, clicked. A lot of those superficial kinds of worries have taken a back seat. So instead of fretting about what will happen next week or next month, I can just take it day to day.
Continue the conversation on CURE’s forum. >>
Talk about this article with other patients, caregivers, and advocates in the General Discussions CURE discussion group.