Women diagnosed with cancer while pregnant can undergo treatment that is tailored to protect their babies’ safety.
BY DARA CHADWICK
PUBLISHED November 01, 2017 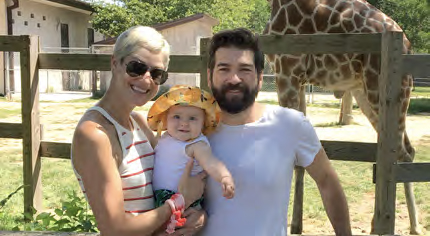 It was July 4, 2016. She and her husband, Ben, were driving to a barbecue and, as she adjusted her dress, her fingers brushed against something unusual — a lump in her left breast.

DeNoble, now 36, assumed it was just another normal change in her nearly six-months-pregnant body. Still, she called her doctor the next day. “She thought it was nothing, but said, ‘Let’s get it checked out to be sure,’” DeNoble says. It wasn’t nothing.

After an ultrasound of her breast, DeNoble, who lives in Los Angeles, was told she needed to come in the next week for a biopsy. “I started to cry and said, ‘Can you get me in this afternoon?’” she recalls. At 9:30 a.m. the following Monday, DeNoble, who works in fashion merchandising, was sitting at her desk when her phone rang. The news: breast cancer.

Then 26 weeks pregnant with her first child, she sprang into action, calling her husband, her mom and her best friend. She saw an oncologist at a local hospital, then got a second opinion at Cedars- Sinai Medical Center in Los Angeles. Cedars- Sinai quickly pulled together a multidisciplinary team, including an oncologist, a surgeon and a perinatologist focused on treating her cancer and maintaining her pregnancy. In cases like these, the perinatologist doesn’t take over routine checkups, prenatal care or delivery, but steps in if complications occur.

“It was the worst week of my life, but it helped to have a plan so quick,” DeNoble says. “The tumor was 1.8 centimeters, and I was diagnosed with aggressive, stage 2, triple-negative breast cancer. (It was) terrifying on so many levels. I was scared for myself, but what was scariest was that they wanted me to start chemo during my pregnancy.”

Breast cancer is the most common cancer diagnosed in pregnant and postpartum women, according to the National Cancer Institute, occurring in about one in 3,000 pregnant women. Sometimes, cancer is discovered during routine prenatal screenings, such as Pap tests and ultrasounds, but its diagnosis can be challenging because of natural changes that occur in a woman’s breasts during pregnancy. In fact, prior to her ultrasound, DeNoble’s lump was suspected to be mastitis, an infection in the breast tissue.

While breast cancer is the most frequently seen cancer type during pregnancy, others among the most common include lymphoma (both Hodgkin and non-Hodgkin), melanoma and cervical cancer.

“About one in 1,000 pregnancies is complicated by cancer,” says Elyce Cardonick, M.D., a maternalfetal medicine specialist and professor of obstetrics and gynecology at Cooper Medical School at Rowan University in Camden, New Jersey. “Women are getting pregnant later, and late first pregnancy increases risk.” That’s because people face a higher risk of developing cancer as they age.

In most cancer types, pregnant women whose disease is diagnosed without a long delay, and treated in a timely fashion, are just as likely to deliver live babies as women without cancer, Cardonick says.


For many women, the shock of a cancer diagnosis during this major life milestone soon gives way to fears about the impact of treatment on the pregnancy — and whether treatment will even be possible. These are the most common concerns, says Susan Musialowski, patient coordinator for Hope for Two, an international, online, nonprofit organization that originated in Amherst, New York, and offers free support to women diagnosed with cancer while pregnant.

“Women find us at all different points in their pregnancies, but the biggest question we hear is, ‘Now that I have these two things together, can I be treated?’” she says.

In many cases, the answer is yes. But how that treatment occurs requires a carefully considered approach based on factors including how far along the pregnancy is and the type of cancer involved. Treatment is often tailored during pregnancy, potentially taking a different course than it otherwise would.

“You can’t treat the pregnancy in isolation,” Cardonick says, “and you can’t treat the cancer in isolation.” The fetus is at greatest risk during the first trimester, when organs, including the heart, limbs, eyes, ears and brain, are developing. “We like to avoid any chemotherapy, immunotherapy and targeted therapy in the first trimester,” says Julian Schink, M.D., chief of gynecologic oncology at Cancer Treatment Centers of America and medical director of gynecologic and medical oncology at the center in Zion, Illinois. “But that’s not always possible.”

Generally, Schink says, some alkylating agents, such as Cytoxan (cyclophosphamide) — chemotherapies that interfere with DNA to stop cancer cells from growing — have been shown to have some toxicity to the fetus. Newer, more commonly used chemotherapy drugs, such as Platinol (cisplatin) and Adriamycin (doxorubicin), appear to be safer, he says. As for immunotherapy and targeted therapy, “we have far less experience with these newer drugs,” Schink says, adding that this type of treatment must be evaluated on a case-by-case basis.

Chemotherapy treatment during pregnancy falls into two categories. “There’s lifesaving treatment you have to give right now to get rid of or effectively treat the cancer.

In those situations, we might be able to delay past the first trimester, but there’s not always a lot of choice,” Schink says. “There’s also adjuvant chemotherapy that is given (after primary treatment) to lower the chance of cancer recurrence. Those patients are more often able to wait until after pregnancy.”

Other cancer treatments may also be safe for certain pregnant women. “Surgery is generally quite safe during pregnancy,” Schink says. Radiotherapy can be done with some shielding, though it’s ideal to wait until after the first trimester, he says.

“With certain cancers, such as a brain tumor, radiation may be done in the first trimester because of the distance between the fetus and the tumor site,” Cardonick says.

In some other cancers, too, it may be optimal to give radiation earlier, she says, because the top of the uterus rises in later trimesters, creating less distance between the tumor site and the fetus.

The characteristics of DeNoble’s cancer made her a good candidate for chemotherapy to not only shrink the tumor prior to surgery, but to lower the risk of future spread of the disease. She was nearly in her third trimester when she began her prescribed regimen: four rounds of Adriamycin and Cytoxan (AC), followed by a month off to recuperate. Then, the plan was to induce labor around 38 weeks and follow that with 12 rounds of Taxol (paclitaxel), surgery and radiation.

While undergoing the first two rounds of AC, DeNoble continued cycling and yoga classes, and took walks every day. “I wanted to maintain some sort of normalcy,” she says. “I felt good, and I have to believe that helped me.”

Shortly after her third round of AC, the plan changed abruptly. After being treated on a Thursday when she was 33 weeks pregnant, she got up around 1 a.m. to use the bathroom and felt the unmistakable rush of her water breaking. “They had wanted me to wait a month after getting chemo before delivery,” she says, “and I’d just had chemo that day.”

Contractions started, so she and her husband headed to the hospital. “There were about 20 people in the delivery room, between the NICU and specialty doctors,” DeNoble says. Their daughter, Elin — now a healthy 10-month-old — arrived at 6:29 a.m., weighing 4 pounds, 3 ounces. After giving birth, DeNoble returned to her scheduled chemotherapy for her last round of AC, followed by treatment with Taxol and then surgery in February, 2017. She finished five weeks of radiation therapy in May.


Maintaining a healthy pregnancy that allows the baby to fully develop, while treating a pregnant woman’s cancer, can be a delicate balancing act.

It’s important for pregnant women, especially those being treated for cancer, to get adequate nutrition to support the pregnancy.

“Working with a nutritionist is always helpful, but pregnant women tolerate chemotherapy better than they expect to, and can have anti-nausea medications with the chemotherapy, as non-pregnant women do,” Cardonick says. “I advise patients to try to eat small frequent meals and snacks — five to six times daily — especially in the weeks between treatments.”

“In all medical conditions, if Mom is sick, there’s an impact on the fetus,” says Cardonick. But, she says, data show that children are more affected by being born pre-term than they are by chemotherapy their mothers receive. Typically, for each week of pregnancy, a two- to three-point increase is seen on the Bayley Scale of Infant and Toddler Development; higher scores on items, including cognitive, language and motor skills, are associated with more normal rates of development.

Although cancer rarely affects a woman’s delivery, Schink says, “we do try to sequence chemotherapy so that platelet and white cell counts aren’t low (when the baby is born).”

Delivery is sometimes induced — depending on cancer type and typically with the aim of getting a definitive treatment started — but oncologists are usually more concerned about the effects of pre-term labor. “If the harm of prematurity exceeds the harm of waiting, you should wait,” he says. C-sections are not more common in women with cancer, except in some cases of vulvar or cervical cancer, Cardonick says.

As for terminating a pregnancy because of a cancer diagnosis, Schink says there may be cases where it might be best to terminate, such as a diagnosis of acute leukemia, but Cardonick adds that, overall, there’s no data showing that survival is improved by ending pregnancy.

Cardonick, who runs the Pregnancy & Cancer Registry maintained at Cooper Medical School, says that, in the past, about 20 percent of physicians advised pregnancy termination, regardless of cancer type, but that number has now dropped to 11 percent.

The registry, a repository of cancer cases diagnosed during pregnancy, including those treated with chemotherapy and the outcomes for both mother and infant, provides general guidance, information and data for women and their oncologists. “The main purpose of the registry is to tell people they’re not alone,” she says. “We don’t want women to sacrifice their own survival by not treating their cancer.” 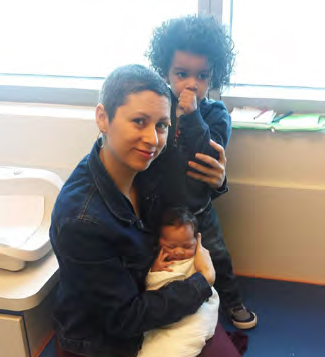 JULIETTE GRAZIANO was shocked to be diagnosed with breast cancer while pregnant with her daughter, NIYA, and weaning her then year-old son, JAKARI. - COURTESY JULIETTE GRAZIANO
Juliette Graziano, 43, of Miami Beach, Florida, was diagnosed with breast cancer at the end of her first trimester. She was in the process of weaning her then year-old son and thought she had an infected duct. She mentioned it to her doctor, and he referred her to a specialist.

“I thought he was overreacting,” she says. “I had no idea this could be a diagnosis during pregnancy.”

Graziano was treated with six rounds of fluorouracil and AC while pregnant. After her daughter was born at 38 weeks, Graziano had 12 rounds of Taxol, a double mastectomy and five weeks of radiation therapy. When asked what advice she’d offer to other women, Graziano says, “Get the test! I felt the lump, but the idea of cancer seemed so unrealistic and far-fetched. Don’t assume that it’s just pregnancy- or breastfeeding-related.”

Seek second and third opinions, too, she suggests. “I felt pressure to get right into chemo, since there were a limited number of weeks I could be in treatment before delivery,” Graziano says. “Keep looking until you find your right treatment team, even if it takes several opinions. The extra week was well worth the sense of peace and best result of a very healthy and happy baby.”
Be the first to discuss this article on CURE's forum. >>
Talk about this article with other patients, caregivers, and advocates in the General Discussions CURE discussion group.