A Revolution in the Treatment of Neuroendocrine Tumors

Patients with neuroendocrine tumors have more treatment options than ever before.
BY Arlene Weintraub
PUBLISHED August 09, 2017 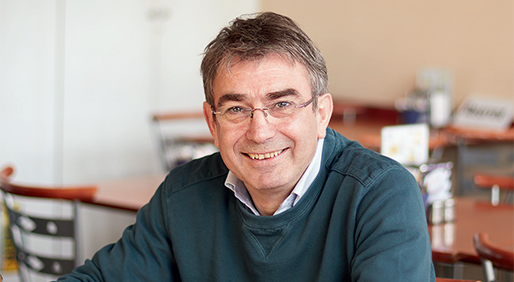 RONNY ALLAN, a patient in the United Kingdom who was diagnosed with a metastatic NET in his small intestine in 2010, got his carcinoid syndrome symptoms under control with Somatuline. - COURTESY RONNY ALLAN
Eileen Kaveney has been living with neuroendocrine tumors (NETs) for 13 years, during which time she has benefitted from a revolution in treatment options for this rare tumor type. Kaveney, a retired New York City elementary school administrator, was free of cancer for three years after she underwent surgery to remove her first NET, which began in her pancreas and spread to her spleen and stomach. Then, the cancer reappeared in her liver and Kaveney tried a variety of drug treatments, including endocrine hormone injections and chemotherapy. But the hormones stopped working and she couldn’t tolerate the chemotherapy.

In May 2015, she joined a trial of peptide receptor radionuclide therapy (PRRT), an experimental treatment that combines a drug that binds to specific receptors on NETs with radiation and that is showing promise in patients with metastatic NETs.

Kaveney’s tumors started shrinking after just one dose and have stayed stable since then. Kaveney has no symptoms and says she’s thankful to be able to pursue an active lifestyle, complete with a daily walk, yoga and meditation. “My liver is functioning normally. My doctors say I could live 30 to 40 years with this,” Kaveney says. “I am very healthy. I like to help other patients. I tell them ‘you can live with this — it’s not the end of your life.’”

PRRT is one of several experimental approaches that is expected to expand the treatment options, and improve the prognosis, for many patients with NETs. Coupled with advances in imaging and surgery techniques, a growing selection of targeted drugs approved by the Food and Drug Administration (FDA) are boosting survival times, says James Yao, M.D., a professor in the division of gastrointestinal medical oncology at The University of Texas MD Anderson Cancer Center in Houston. “Before 2011, there were very few FDA-approved treatments for controlling NETs — that has completely changed,” Yao says. “Now we have a lot of options available.”

NETs, which are also called carcinoid tumors, can occur in many parts of the body because they begin in the neuroendocrine cells, which are widely disbursed and responsible for producing hormones. NETs occur most commonly in the lungs and gastrointestinal (GI) tract, although they can also appear in the thyroid, adrenal or pituitary glands. About 8,000 people in the United States are diagnosed with GI NETs every year and 4,000 with lung NETs, according to the American Society of Clinical Oncology (ASCO).

No obvious causes or avoidable risk factors have been found for NETs, according to ASCO. Most patients receive a diagnosis after age 60. Five-year survival rates can be as high as 90 percent when the tumors haven’t spread to distant organs or lymph nodes.

NETs are difficult to diagnose because they often cause no symptoms or they produce symptoms that don’t readily point to cancer. About 20 percent of NETs cause abnormal hormone secretions, sometimes referred to as carcinoid syndrome, which can result in a variety of symptoms. If an intestinal NET causes too much of a hormone called serotonin to be released, for example, patients can get flushing or diarrhea. A NET on the pancreas can cause excess production of insulin and glucagon, which can make blood sugar hard to control. And carcinoid syndrome in the lungs can cause asthma-like symptoms, such as a cough or wheezing.

NETs possess receptors for somatostatin, a hormone that occurs naturally in the body and regulates the production of other hormones. Synthetic versions of somatostatin, called Somatuline (lanreotide) and Sandostatin (octreotide), are often prescribed to patients with NETs as injections every two weeks or monthly to control carcinoid syndrome.

Ronny Allan, a patient in the United Kingdom who was diagnosed with a metastatic NET in his small intestine in 2010, got his carcinoid syndrome symptoms under control with Somatuline. It took three surgeries to remove most of the cancer, and Allan’s disease has been declared stable — meaning none of his remaining tumors are growing.

Allan believes he may owe his positive prognosis to Somatuline, which has been shown in several studies to have some antitumor effects in addition to controlling carcinoid syndrome. In 2014, the FDA approved the drug for tumor control in patients with gastrointestinal or pancreatic NETs, based on a clinical trial in which progression-free survival (PFS) for patients on the drug was more than 22 months compared with 16.6 months for patients on placebo.

Somatostatin analogs can cause side effects like intestinal malabsorption and fatigue — symptoms that sometimes feel like carcinoid syndrome — says Allan, 61, a retired management consultant who blogs about his experiences, but it’s worth it. “I’m quite fortunate that my quality of life is good,” Allan says. “There’s been so much development. A lot of us are living longer.”

Depending on the location and size of NETs, surgery can offer the best chance for a cure, and new imaging techniques are making it easier to spot and evaluate NETs. One commonly used imaging technique is Octreoscan, in which a mixture of octreotide and the radioactive particle indium-111 is injected into the bloodstream. The drug latches onto the NETs’ somatostatin receptors, causing the tumors to light up.

An even more detailed imaging test became available in June 2016, when the FDA approved a new diagnostic agent for positron emission tomography (PET) scans called gallium 68 Ga-Dotatate. The product, which has the brand name Netspot,is a radioactive tracer that binds to receptors for somatostatin, producing scans that show exactly where NETs are and how likely they are to respond to therapies that target the receptors.

Because gallium 68 Ga-Dotatate binds to somatostatin receptors, it reflects the density of such receptors, which can not only help predict how patients will respond to somatostatin analogs but also aid surgeons in deciding on the proper course for surgery. “This new type of PET scan allows you to detect smaller lesions, which helps you make a decision about whether you can operate for a cure or not,” Yao says.

Several targeted treatments for NETs are being developed. In February 2016, the FDA approved the chemotherapy drug, Afinitor (everolimus), for patients with advanced or metastatic gastrointestinal or lung NETs who aren’t eligible for surgery.

Afinitor blocks mTOR, a proteinsignaling pathway that can malfunction and contribute to the growth of some cancers. In a pivotal trial, the drug increased median PFS by seven months in patients with advanced GI or lung NETs.

Now Afinitor is being tried in combination with LEE011 (robciclib), an experimental drug that inhibits two proteins called cyclin-dependent kinase 4 and 6 (CDK 4/6). These proteins also enable the growth of cancer cells. “The idea is that we’re trying to target the mTOR pathway with two different drug mechanisms,” says Diane Reidy-Lagunes, M.D., a medical oncologist at Memorial Sloan Kettering Cancer Center (MSK) in New York City and the lead investigator for a phase 2 trial, which is recruiting patients with NETs in the foregut. When the combination was initially tested in cells from pancreatic NETs, she adds, the results indicated that the approach “could be very promising.”

Another emerging treatment that oncologists are watching is a variation of the Netspot imaging system that uses somatostatin analogs to deliver radiation directly to tumors. Lutathera (lutetium Lu 177 dotatate) falls under the PRRT umbrella, a new class of treatments. In a phase 3 trial of patients with GI NETs, Lutathera reduced the risk of disease progression or death by 79 percent versus treatment with octreotide.

“In many patients, PRRT is highly effective,” says Thomas O’Dorisio, M.D., a professor and endocrinologist at the University of Iowa Hospitals & Clinics, who has been an investigator for several clinical trials. Response to the therapy, he adds, “has to do with the quality and number of [somatostatin] receptors on the tumors,” which has become easier to evaluate thanks to improved imaging technology. “We’re getting to the point where we can predict effectiveness based on a gallium scan before treatment.”

Reidy-Lagunes at MSK is participating in a trial that’s aimed at improving PRRT by attaching a protein called 177Lu-OPS201 (previously DOTA-JR11) to the radioactive particles. 177Lu-OPS201 is a somatostatin antagonist, meaning it binds to the somatostatin receptor regardless of whether it’s in an active or inactive state. Early evidence suggests it may increase the effectiveness and reduce the potential of serious side effects like kidney damage, Reidy- Lagunes says.

The treatment “binds with better affinity to the tumor itself so you’re delivering more radiation directly to the tumor — like a lock and key,” she says. A phase 1 study was put on hold so investigators could fine-tune the dosage and is now resuming at a lower dose, Reidy-Lagunes says. New treatments for carcinoid syndrome are also making their way through the development pipeline. In February 2017, the FDA approved Xermelo (telotristat ethyl), an oral drug that reduces the overproduction of seratonin that some NETs cause and, in so doing, relieves diarrhea. The drug is designed to be taken along with a somatostatin analog.

“Some of the hormones [associated with carcinoid syndrome] can be quite debilitating, so from a quality-of-life perspective, this approval was really exciting for all of us who treat the disease,” Reidy-Lagunes says. “It’s an added benefit in our armamentarium to control the symptoms of the disease.”
Continue the conversation on CURE’s forum. >>
Talk about this article with other patients, caregivers, and advocates in the General Discussions CURE discussion group.