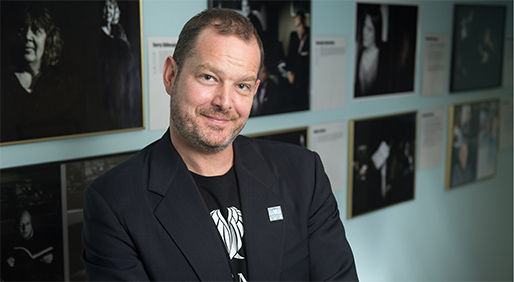 BENJAMIN BORNSTEIN, when treated for pediatric cancer, disagreed with his parents over his treatment course. - PHOTO BY KEN CARL
WHEN BENJAMIN BORNSTEIN WAS 14, he and his parents disagreed about whether he should undergo six or 18 months of chemotherapy to treat his non-Hodgkin lymphoma. In 1985, both options were in the clinical trial stage, so outcomes remained uncertain.

He wanted the more aggressive therapy, while his parents, seeing the toll chemotherapy was taking on him, preferred the shorter treatment option. His face puffed up; his hair fell out; their only child was going through the fight of his life. Each treatment required a spinal tap, and with each one, he risked paralysis.

“There was all this uncertainty,” says Bornstein, 46, a Chicago resident. “I do remember them asking, ‘Could we just stop at six months and see what happens? Is it really worth it for an outcome that we don’t know is any better?’ I was pretty adamant about doing the 18-month cycle. I said, ‘I can endure this.’”

Bornstein’s parents didn’t want to lose their son, but it pained them to see him suffer, says the now three-time cancer survivor and executive director of Imerman Angels, a nonprofit organization that provides free psychosocial support to cancer patients and caregivers nationwide.

“We ultimately went for the decision I pushed for,” he says. After his parents voiced their opinions, they left it up to him and supported his choice. That was more than 30 years ago, but they were doing what experts today advise: When conflict arises, caregivers and their loved ones should explain their reasons for their opinions, and then let the person with cancer make the final decision.

Given the fear, uncertainty and plethora of choices that accompany a cancer diagnosis, it’s not unusual for people who have the disease and their caregivers to disagree over treatment, which can lead to misunderstandings and stress. In a 2003 study that analyzed decision-making in lung cancer patients and caregivers at a large U.S. comprehensive cancer center, researchers reported that 65 percent of families experienced disagreements over treatment.

“It’s not unusual to see conflict when it comes to life and death,” says Liz Blackler, LCSW-R, MBE, senior clinical social worker and ethics consultant at Memorial Sloan Kettering Cancer Center in New York City. “Disagreements do not automatically mean patients and families care less for each other.”

Differences can arise over when to begin treatment, where to seek it or the type and aggressiveness of therapy; whether to seek a second opinion, enroll in clinical trials, get surgery or take preventive medications; and when to end treatment and switch to comfort measures and hospice care. Cancer-related copays, expenses and missed work time can impose a financial burden on families, often leading to clashes over money. Patients may worry about the financial toll of treatment, whereas caregivers will do whatever it takes to save their loved one’s life. Also, preferences for these options may change over time as treatment progresses or side effects become more of an issue, and this can lead to escalating conflict that affects the patient’s emotional state and stress levels, increases family tension and hurts longterm relationships, notes Blackler.

Discussing conflicts and knowing that they arise from a place of love can alleviate stress and discord, so it’s a good idea to have open conversations a few times per week, suggests Laura S. Porter, Ph.D., a clinical psychologist at Duke University Medical Center, in Durham, North Carolina.

The Challenge of Uncertainty

Uncertainty over the best course of treatment is a common reason for disagreements.

When patients and caregivers see things through the lens of hope, they often misunderstand doctors who speak in euphemisms and generalities, experts say. Patients and caregivers may find clarity by asking their medical teams for direct, candid answers about expected treatment outcomes and prognosis.

“My physicians are very clear: ‘This is urgent; we have to start now’ or ‘It’s not urgent,’” says Blackler of oncologists at Sloan Kettering. Consulting a doctor when there’s a disagreement adds a neutral person who can make a recommendation based on pragmatism, not emotion.

Before such meetings, patients and caregivers should discuss their viewpoints and agree on which questions to ask.

“Collaborate on questions so this is a team effort and the patient doesn’t feel alone and isolated at such a scary time,” says Maryrose Mongelli, M.S.W., LMSW, an oncology social worker at CancerCare, a national nonprofit organization that provides free, professional support services to people with cancer and their loved ones. After talking to the medical team, Mongelli says, a healthy way to resolve differing viewpoints is to discuss what the treatment involves. Take time to understand the decreased risk of recurrence and death a treatment might offer compared with its potential short- and long-term side effects. Then, openly and honestly talk about the benefits and risks and what the patient’s quality of life will be. 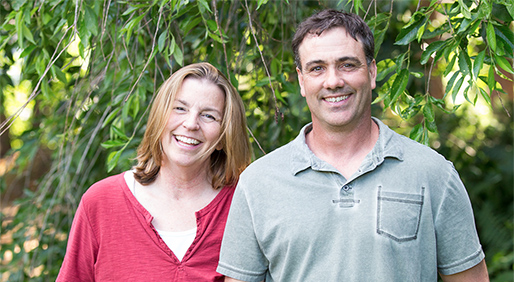 WENDY and RICH VAN DE BOGART don’t shy away from frank conversations about her cancer. - PHOTO BY MICHELLE GIRARD
Wendy Van de Bogart had that kind of conversation with her husband when she was considering preventive treatment after surgery for a brain tumor.

She faced the option of taking chemotherapy to help prevent a cancer recurrence, and some family members urged her to do it. However, the mother of three wasn’t sure that her body could take it, because she had been fighting stage 3 breast cancer and then a brain metastasis for two years.

Her husband, Rich Van de Bogart, didn’t like the idea of six months of oral chemotherapy treatments, and asked, “If there’s no cancer, why take something that can affect your heart? Save that for when you really need it.”

Wendy felt torn, but after meeting with her oncologist, decided to give it a try so she would know she had done all she could to fight the disease. Though he remained worried, Rich was supportive.

Ultimately, her cardiologist advised against the chemotherapy, saying it would put too much strain on her heart. “He agreed with me,” Rich says with a broad smile.

The Canton, Connecticut, couple have made cancer-related decisions in much the same way they have come to other agreements throughout their marriage: by supporting each other through difficult moments but not dictating each other’s choices. “I kind of voiced the way I felt, and that was it,” says Rich. “I let her make her decision.”

For some, it can be helpful to talk these issues out with the help of a social worker, who can offer patients and caregivers a safe place to express their fears. “The better each person is coping with it individually, the better they’re able to do it as a team,” Porter says.

A cancer treatment center may not offer these services unless it’s obvious that someone is in extreme distress, so patients and their caregivers can and should seek them out, Mongelli says. “A social worker will be able to help you locate resources,” she says. “Just because it looks like you’re holding it together, it doesn’t mean you are.”

Seeing a social worker can be part of a larger plan for palliative care, which involves complementary therapies that can help alleviate side effects and symptoms, including stress, Porter notes. This is not the same as hospice care in that anyone with current or expected symptoms of cancer or cancer treatments can be referred. A person faced with a serious diagnosis should ask for palliative care at the start of treatment, she says, since studies show that patients who receive it live longer and have a better quality of life. Palliative care may include techniques such as massage, acupuncture, nutrition counseling and spiritual support.

Trying to truly understand each other’s perspectives is crucial not only in resolving the conflicts of the moment, but in avoiding those that might arise later in the cancer journey.

“I think some family members have unrealistic expectations about what the treatment is supposed to do,” Porter says. “Being able to express that love and fear can be very cathartic — it can let that person let go.”

That’s why, as challenging as it may be, Porter suggests that patients and caregivers talk about finances shortly after diagnosis.

“It’s much less threatening at that point,” she says. “Presumably, you’re going to be in a better place emotionally and physically.”

Experts also recommend writing out advance directives and discussing end-of-life wishes early in the course of a cancer. This doesn’t imply a lack of hope; it’s simply easier to discuss preferences when patients are feeling relatively well, experts say.

Make time and space for this during a calm moment, suggests Porter.

“Really focus on listening to each other. Understand that your experiences as a patient and a support person are very different. You may not agree. In a loving relationship, to be supportive of your loved one is really to try to listen to the other person’s perspective and try to understand it. You don’t have to agree with it, but understanding goes a long way toward accepting those differences,” she says.

The Van de Bogarts, who have been married for 23 years, have always talked about everything, and since Wendy’s diagnosis, they’ve had some end-of-life discussions.

“It’s pretty hard to have that discussion without getting emotional,” she says. Her sons aren’t ready for the “what if” talk, so because she’s feeling good, she respects their wishes.

However, she has talked with her husband and her oldest child, a daughter, about the future.

She laughs when sharing the directives she gave them: She doesn’t want anyone taking down any family photos or replacing her kitchen canisters.
Be the first to discuss this article on CURE's forum. >>
Talk about this article with other patients, caregivers, and advocates in the Lymphoma Cancer CURE discussion group.