Early introduction of palliative care can improve quality of life for patients with gynecologic cancers.
BY Katie Kosko
PUBLISHED April 25, 2017 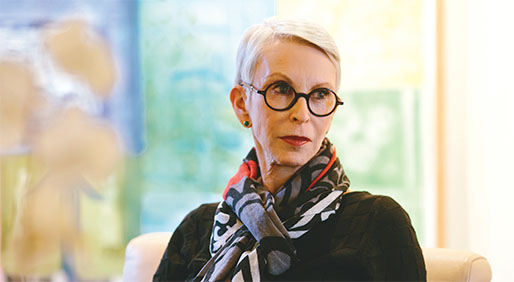 They have medication to stall the nausea, but that also has side effects. I am a big believer in complementary medicine, if it is supplemental to what someone’s physician would suggest.”
— CAROL GOLDSTEIN, patient - PHOTO BY: KAELA GREEN
For at least a year, Carol Goldstein experienced gastrointestinal pain. Curious as to what was going on with her body, she mentioned it to her primary care physician, who put her on Prilosec to treat potential reflux. Then one day, while hiking with her family, she had upper-abdominal pain so severe that she thought she was having a heart attack. Her cardiologist had her come in immediately for testing. The heart attack was ruled out, but instead Goldstein heard: “I see something on your ultrasound.”

Goldstein, a Ph.D. nurse, followed up with Sue Davidson, M.D., head of gynecologic oncology at The Center for Surgical Innovation at the University of Colorado in Denver. After an examination, Davidson confirmed the news no one wants to hear: Goldstein had metastatic ovarian cancer. That was in August 2012.

“Like every other woman who has ovarian cancer, I had symptoms that I did not recognize because, as we say in the field, common things are commonest,” says Goldstein. “No woman of my age — I’m now 74 — does not have some bloating or frequent urination.”

Days after her diagnosis, Goldstein was in the operating room for a debulking. In this common surgery for ovarian cancer, the surgeon hopes to locate and remove as much of the tumor tissue as possible. Goldstein’s surgery was followed by seven weeks of chemotherapy.

“I know that surgeons and most physicians want to cure,” she says. “They want to do everything they can to fix whatever is wrong with you, but (late-stage) ovarian cancer is really not fixable.”

Having been in the medical field for 50 years, Goldstein knew she could seek palliative care. She signed up to be a patient of Carolyn Lefkowits, M.D., also at the University of Colorado, in Aurora, a gynecologic oncologist who is also a palliative care specialist.

WHAT IS PALLIATIVE CARE?

Palliative care, sometimes called supportive care, is given to relieve side effects and optimize overall functioning and quality of life of patients who have a serious or life-threatening disease. Specialists prefer to begin this care as early as possible after diagnosis to prevent or treat symptoms.

A palliative care team — made up of specialists such as physicians, nurses, physical therapists, pain management experts, massage therapists, chaplains, dietitians, social workers and psychologists — can also help patients with psychological, social and spiritual problems. All this can be done simultaneously, and in coordination with, appropriate cancer-directed treatments.

However, there is a common misconception among patients, caregivers and even some oncologists about what palliative care is. In fact, a 2011 survey conducted by the Center to Advance Palliative Care found that 70 percent of people had little accurate knowledge about it.

Palliative care is often confused with hospice or “end-of-life” care, which tends to be administered in the home when a patient is deemed to have terminal disease, with an estimated six months or less to live.

Palliative care, however, is “this place to augment — not replace, not undermine, but augment — the care that traditional oncology services can provide to enhance the comprehensiveness of the care for patients,” says Lefkowits. “It takes some of this supportive care off the plate of the oncologists, and it is greatly underutilized.”

Playing their parts in that disconnect have been a lack of education about palliative care, and the lack of a national calling for it. Not until a few years ago were there even defined curricula on palliative care. Now, physician fellowships, where this type of care can be learned, are up and running.

“Maybe they don’t have uncontrolled pain that day, but maybe six months later they do,” Lefkowits says of patients. “If you’ve oriented them to the option of seeing a supportive care specialist for symptom management, then when they do develop those symptoms, they can recognize that they have unmet needs.”

Goldstein took advantage of the fact that the University of Colorado Cancer Center has a thriving palliative care program. In addition to her treatment from her oncologist, she saw a psychologist and relied heavily on a dietitian to ease side effects of her treatment that included diarrhea, constipation and gastrointestinal pain.

Yoga and meditation became part of her routine, as did acupuncture, with which Goldstein had had previous experience during a decade of residence in Hong Kong.

“I saw my acupuncturist every week before my chemotherapy, and I did not feel nauseous or throw up once,” Goldstein says. “They have medication to stall the nausea, but that also has side effects. I am a big believer in complementary medicine, if it is supplemental to what someone’s physician would suggest.”

Treatments for gynecologic cancers vary based on disease type and stage, but they may include various chemotherapies, such as the drugs Taxol (paclitaxel) and carboplatin; surgery; radiation therapy, which can sometimes involve intracavity treatment, where a device is placed in the vagina containing radioactive material; and hormonal therapies.

For Beverly Waite, it was severe back pain and bowel obstruction that she found the most unbearable. Diagnosed with endometrial cancer nine years ago, at age 59, she found herself turning to palliative care a few years later.

She was first introduced to the idea after developing side effects during a clinical trial at Dana-Farber Cancer Institute in Boston.

“They tried all kinds of medications,” says Waite. “Then they said, ‘Let’s send her to Dr. Brandoff at pain management.’ He’s been the best thing that has ever happened in my treatment.”

“He talked to me and explained thoroughly about managing pain, which drugs to use and the combination of drugs,” she says of Douglas E. Brandoff, M.D., an oncology-trained palliative care specialist at Dana-Farber. He also asked about her treatment and personal life, Waite adds.

Not only physical side effects can occur due to anticancer treatments, but emotional and psychological ones, too. Women with gynecologic cancer may experience anxiety, stress and depression as a result of what is happening to their bodies. The various aspects of palliative care can be useful in all of these areas, yet these services remain underutilized. This trend is apparent among all patient populations with cancer, not just women with gynecologic cancers.

“Palliative care would particularly benefit women with advanced ovarian cancer, because they typically are debilitated and they have to take complicated treatments,” says William Robinson, M.D., Maxwell E. Lapham Professor of Gynecologic Oncology at Tulane Cancer Center in New Orleans, Louisiana. “We know most patients with ovarian cancer will live four or five years, or more, but they will be on treatment for most of that time, so they clearly would benefit from a supportive program.”

“These are women who are in stages 2b through 4a, which means that it has grown beyond the cervix, but it has not metastasized. That group is unique because they, too, need a complex treatment plan that includes radiation plus chemotherapy,” he adds.

DO YOU NEED PALLIATIVE CARE?

Dealing with a cancer diagnosis and treatment and assessing your own need for palliative care can be challenging. While patients should advocate for their own health and care, nurses, social workers and caregivers can help to assess the situation.

For instance, Robinson says a social worker can use a distress thermometer — a questionnaire created by the National Comprehensive Cancer Network — to determine what problems a patient may be facing at that specific time.

Caregivers may also suggest that the patient they’re helping could benefit from counseling, stress-reducing activities or other palliative care. “If you realize how much stress you’re under, then put that together in your mind with what somebody who is actually receiving a treatment and has the disease is feeling, you can tell pretty quickly who’s going to benefit,” Robinson says.

The levels of palliative care available vary from institution to institution. National Cancer Institute-designated cancer centers are among the most likely facilities to have palliative care programs. Lefkowits says it may be best for patients to first ask their oncologists what resources are available within the places they are being treated, and then to reach out to social workers or organizations if more resources are needed. But, she adds, it is also important for an oncology team to ask questions.

“We’re not good at predicting that all patients with this kind of cancer, at this stage, getting this treatment, are going to have unmet palliative care needs,” she says. “The best thing to do is just ask people where they are in terms of their symptoms and how they are coping. That should be a routine part of cancer care.”

Studies conducted on early-in-treatment palliative care show that these techniques may not only improve quality of life but also prolong survival. A study of patients with metastatic non-small cell lung cancer, for instance, determined that patients who started palliative care early on lived longer than others, and had better quality of life and mood. Although not many studies on palliative care specifically in gynecologic cancers have been completed, a Brazilian study demonstrated similar findings in patients with advanced breast or gynecologic cancers.

“While each patient’s experience is different, the idea is that a diagnosis of a potentially life-limiting illness and the treatments that come with it are going to result in symptoms, struggles and coping challenges for a patient and their family,” says Lefkowits.

Most insurance companies, and Medicare and Medicaid, will cover palliative care, just as they would cover other hospital or medical costs. However, coverage may vary when it comes to integrative therapies like massage therapy, yoga or acupuncture. Patients can reach out to social workers, who may be available to talk about cost or financial concerns.

“Get into palliative care as soon as possible,” Waite advises. “Not only do they manage your pain, they also can refer you to social workers and a whole group of other professionals for support.”

A state-by-state report card, released in 2015 by the Center to Advance Palliative Care and National Palliative Care Research Center, detailed access to palliative care in hospitals in the United States, showing that access varies based on where a patient resides. The worst reports emerged from the South, as well as from Alaska, Kansas, New Mexico and Wyoming.

“Clearly, palliative care has been an overlooked part of cancer care,” says Robinson. “But I would tell people to look at it like you are using any other consultant. There should be no stigma. There wouldn’t be stigma with seeing a cardiologist, so why should there be a stigma for seeing a palliative care specialist?”

Goldstein lobbies for change as both a patient and a registered nurse. She suggests more academic peer-reviewed studies, in addition to well-designed short courses that would be mandatory for all physicians and nurses, helping them to become familiar with palliative care and how to give more patients access to it. “What I don’t want for myself, and what I think most people don’t want, is to die in pain,” says Goldstein. “We are all going to die. None of us live forever. What I want for myself and my family is to have a peaceful death with as little pain as possible.”
Be the first to discuss this article on CURE's forum. >>
Talk about this article with other patients, caregivers, and advocates in the General Discussions CURE discussion group.