Physical therapy can boost quality of life for patients with cancer, but it isn’t always prescribed.
BY DARA CHADWICK
PUBLISHED February 23, 2018 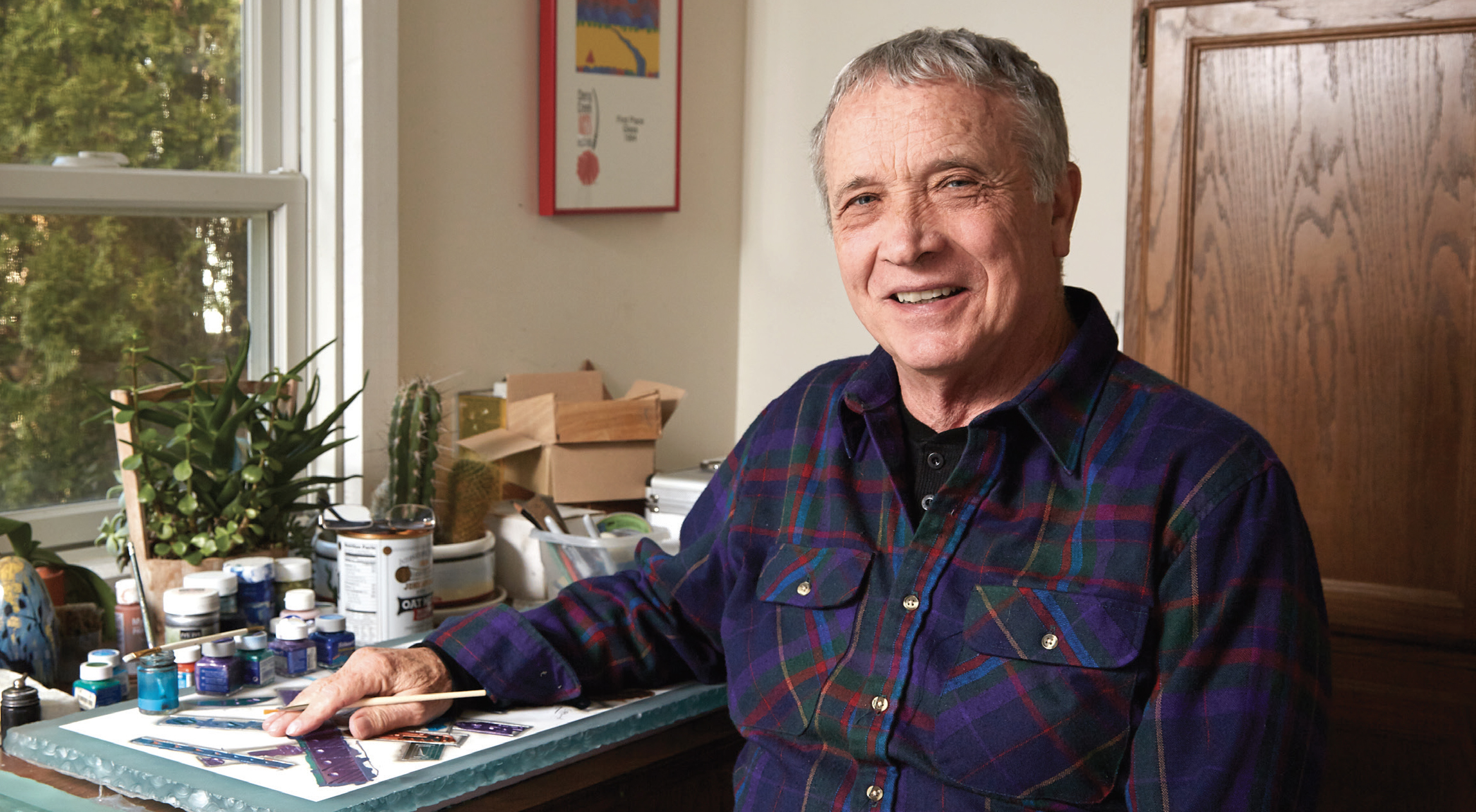 Physical therapy helped DALE EGGERT overcome fatigue during chemotherapy. - PHOTO BY CHRIS KESSLER
After a cancer diagnosis, many patients anticipate a treatment regimen that might include surgery, chemotherapy, targeted therapy, immunotherapy or radiation. But there’s another type of treatment that can benefit people with cancer, and it’s one that they don’t always get — physical therapy.

Physical therapy can help address side effects of cancer or its treatments, including pain, weakness, body changes and fatigue. Some of these can disrupt the way the body functions, creating problems such as incontinence, balance issues, difficulty swallowing and peripheral neuropathy.

Treatments that attack cancer often cause insults to the body’s musculoskeletal, cardiopulmonary and other systems, which can create functional deficits, says Leslie J. Waltke, D.P.T., a physical therapist and cancer rehabilitation specialist with Aurora Cancer Care and the owner of Waltke Cancer Rehabilitation Academy, both in Milwaukee. “Regardless of the type of cancer, we are treating the results of those insults,” says Waltke, who is also a CURE advisory board member.

Exercise can be an integral part of physical therapy. It has been shown to improve quality of life and, in some studies in the early to mid-2000s, was even associated with better overall and cancer-specific survival in individuals treated for breast or colorectal cancers. However, without guidance from an expert, exercise may not address specific functional problems. That’s why patients should see a physical therapist before beginning any exercise program, Waltke says. “Exercise is a tool that the physical therapist uses,” she says, making modifications for each individual. Other techniques include hot or cold therapy, massage, traction, joint mobilization, electrical stimulation and light therapy.

Some experts believe that physical therapy could benefit nearly every patient with cancer, yet there is evidence that it is underprescribed. A 2009 survey completed by 202 outpatients treated at Mayo Clinic in Rochester, Minnesota, showed that just two were referred for rehabilitation services, even though nearly 66 percent of participants reported functional problems, most often related to ambulation and balance. A year earlier, researchers at the same facility polled 163 outpatients with metastatic breast cancer and found that, of their 469 reported impairments that might have been eased through physical or occupational therapy, just 21 percent were addressed that way.

That’s why it’s important for patients to be aware of what physical therapy can do for them during — or even before — treatment for cancer, Waltke says. If physical therapy isn’t offered, she says, patients should ask for it.

THE TOLL OF TREATMENT


Dale Eggert, 71, of Shorewood, Wisconsin, can attest to the toll that cancer treatment takes on a person’s body. After receiving a diagnosis of B-cell lymphoma and thyroid cancer in 2016, he was treated with chemotherapy, followed by radiation and surgery to remove his thyroid gland.

“After my fifth round of chemotherapy, I felt so weak,” he says. Although he hadn’t spent much time at the gym prior to his cancer diagnosis, Eggert, an artist, says he was “pretty active,” regularly taking 2-mile walks and working in his studio. Still, he wasn’t prepared for the crushing fatigue caused by his treatment. “This put me on my butt,” he says. “Chemotherapy sapped my strength.”

Eggert talked with his nurse practitioner and was soon connected with Molly Megan, a physical therapist at Aurora Medical Center in Grafton, Wisconsin, where he received post-surgical care and later transitioned to the Cancer Recovery With Exercise program at the same location. Megan created a plan that included bike riding, balance moves and weightlifting exercises such as leg and shoulder presses. Fatigue interfered as Eggert worked his way through the program, he says, but his therapist encouraged him to take it slowly and listen to his body. “If I got too tired, she said, ‘We’ll try something else. If you can’t do it, you can’t do it. There’s always tomorrow, and that machine’s going to be waiting for you,’” he recalls.

But Eggert didn’t have to push himself to do 10 or 20 repetitions of an exercise to notice results. He simply focused on doing as many as he could and soon began to feel the benefits. “After one or two months, I felt better,” he says. “I could last longer. My fatigue level dropped, my appetite increased and I slept better.”

Like Eggert, many people being treated for cancer experience severe fatigue, which often tops lists of the most common side effects of both chemotherapy and radiation. And although it might seem counterintuitive, physical therapy can play a vital role in fighting it, according to Waltke. “If I put someone who’s undergoing chemotherapy on a treadmill for a couple of minutes, they actually say, ‘I feel a little bit better,’” she says. “Our job is to keep you healthy, happy and moving.”

RIGHT FROM THE START


Ideally, the effort to keep patients moving will start before they undergo any treatment — a concept known as “prehabilitation,” according to Ekta Gupta, M.D., assistant professor of palliative, rehabilitation and integrative medicine in the Division of Cancer Medicine at The University of Texas MD Anderson Cancer Center in Houston. “We really push physical therapy prior to surgery, as well as strengthening prior to chemotherapy,” she says. “We want to optimize physical function, so we’ll do exercises that focus on endurance, gait, balance and strengthening. Physical therapy is quite important.”

At MD Anderson, Gupta says, assessment and referral for physical therapy are a key part of admission care. Patients are evaluated for functional deficits, such as trouble walking or talking, weakness or difficulty with “transfers,” such as moving from a bed to a wheelchair or the bathroom. Patients who report these types of problems are typically referred for physical therapy right from the start.

That’s just what Waltke likes to see: physical therapy being instituted as soon as possible in the cancer treatment process. “You don’t have to rehabilitate what you don’t lose,” she says. “Waiting for patients to lose function to give it back to them is not best practice.”

Physical fitness is an important predictor of surgical outcomes, according to Alan Yahanda, M.D., vice chair of surgery for Cancer Treatment Centers of America and a surgical oncologist at CTCA in Newnan, Georgia. “Prehabilitation makes a big difference in postoperative recovery,” he says. “Physical therapy is absolutely essential for both pre- and postoperative care.”

THE TOOLS OF THE TRADE


For someone who hasn’t yet begun chemotherapy or radiation, a physical therapy program might focus on aerobic exercise, such as running, walking, dancing or in-line skating, Waltke says. It might also incorporate strength training, she says, which could include weightlifting but also bodyweight exercises like lunges or squats.

As cancer treatment progresses and side effects such as fatigue and weakness begin to appear, a program may no longer resemble a typical exercise regimen, according to Yahanda. For example, a therapist might use stretchy bands to move a patient’s arms for resistance training.“Physical therapy might be as simple as squeezing a ball in your hand or wiggling your toes,” he says.

“Even patients on a ventilator in the ICU can participate in physical therapy activities.”

Physical therapy is important for patients who have undergone surgery as part of their cancer treatment, says Yahanda. Those who have had large abdominal surgeries may have difficulty moving around during the postoperative period. “We enlist the help of a physical therapist very early to help get the patient up, teach them about safety and help them learn how to get up pain-free,” he says.

Physical therapy can also help patients with breast cancer to regain function following mastectomy and lymph node dissection under the arm, which can limit shoulder and arm movement, Yahanda says.

Certain movements can also be useful in treating lymphedema, a type of swelling that occurs when lymph fluid builds up in the soft body tissues under the skin — which can be caused by the cancer itself or as a side effect of the removal of lymph nodes. Lymphedema can cause limb pain, swelling, heaviness, tightness and decreased range of motion. A 2015 study of 1,217 women with breast cancer who underwent surgery and lymph node dissection found that patient education combined with physical therapy — including scar massage and exercises for the upper limbs and shoulders — reduced the risk of breast cancer-related lymphedema by 65 percent.

GIVING IT A TRY


For some people with cancer, the thought of physical therapy on top of other treatments can be a bit overwhelming. Bob Depew, 51, of Atmore, Alabama, says he initially didn’t want to do the exercises recommended by his physical therapist.

Diagnosed with esophageal cancer in June 2017, he received 23 radiation treatments, two rounds of chemotherapy (a complication prevented him from having the recommended five rounds) and surgery to remove most of his esophagus.

Before his surgery, his care team at Cancer Treatment Centers of America advised doing physical therapy — including at-home exercises to strengthen his abdominal muscles — to assist with functions like getting out of bed. “I didn’t want to do it,” he says, but his physical therapist coaxed him along. “She was upbeat and encouraging, saying things like ‘Can we go just a little bit further?’ I’m convinced that getting up and moving was one of the best things I did for myself. Sitting in a hospital room can wear on you. This makes you feel like you accomplished something.”

Patients often worry that they’re not well enough for physical therapy, according to Waltke. “The No. 1 and most distressing complaint is fatigue,” she says, but people who try physical therapy “don’t get as sick, don’t have as much pain, and tolerate chemotherapy and radiation better.”

Some red flags indicate that a patient shouldn’t engage in physical therapy, Waltke says, including an oncologic emergency, such as a diagnosis of hypercalcemia (excess calcium in the blood) or deep vein thrombosis (blood clots). People who experience shortness of breath with minimal exertion, have a fever or infection, or are unable to control their nausea and vomiting should avoid physical therapy in the short term, she adds.

“Most of the time, these are temporary,” Waltke says.

Contraindications aside, she says, it’s the rare patient who doesn’t benefit from some form of physical therapy, which can help maintain cardiopulmonary systems, decrease fall risk and minimize fatigue. For patients with advanced disease, physical therapy can be as simple as standing on one leg to improve balance or doing step-ups on stairs to maintain leg strength, Waltke says, adding that even patients near the end of life benefit from movement.

Patients should look for a licensed physical therapist who specializes in working with people being treated for cancer; it’s OK if the therapist doesn’t hold a doctoral degree, Waltke says. Oncology physical therapy is an evolving specialization; the American Board of Physical Therapy Specialties expects to administer its first certification exam for this field in spring 2019.


Though physical therapy in cancer care might be new to some patients, it is becoming mainstream among oncology care professionals.

Despite oncology providers’ acknowledgment of physical therapy’s benefits, variability in referrals is “huge across the country,” Waltke says. Most insurance companies require a physician’s referral, but “a physical therapy consult is nearly universally covered by every insurance company,” she says. For patients whose oncologists don’t offer a referral for a physical therapy consultation, Waltke has this advice: Ask. “It’s rare to find physicians who will say ‘No, you can’t’ versus those who just don’t think about it,” she says.

Patients who work with a physical therapist benefit from having another member on their care team throughout the scope of their cancer treatment. “You might have a surgery team and a chemotherapy team, but your physical therapist is there from the beginning,” Waltke says.

“Physical therapy is always consistent and is the glue that holds everything together.”
Be the first to discuss this article on CURE's forum. >>
Talk about this article with other patients, caregivers, and advocates in the Head & Neck Cancer CURE discussion group.