Bending the Rules in Lymphedema

Survivors at risk of lymphedema are asked to follow a standard list of lifestyle adaptations, but two experts say those guidelines may change.
BY Beth Fand Incollingo
PUBLISHED November 05, 2019
Lymphedema, a pooling of fluid in areas from which lymph nodes were removed, is a life-changing side effect for one in five people treated for breast cancer. For these patients, the incurable condition tends to affect the limb closest to where the nodes were removed, causing discomfort and physical distortion and limiting activities. Lymphedema can also occur with other cancer types that involve surgery affecting the lymphatic system and is sometimes feared more than a cancer recurrence. 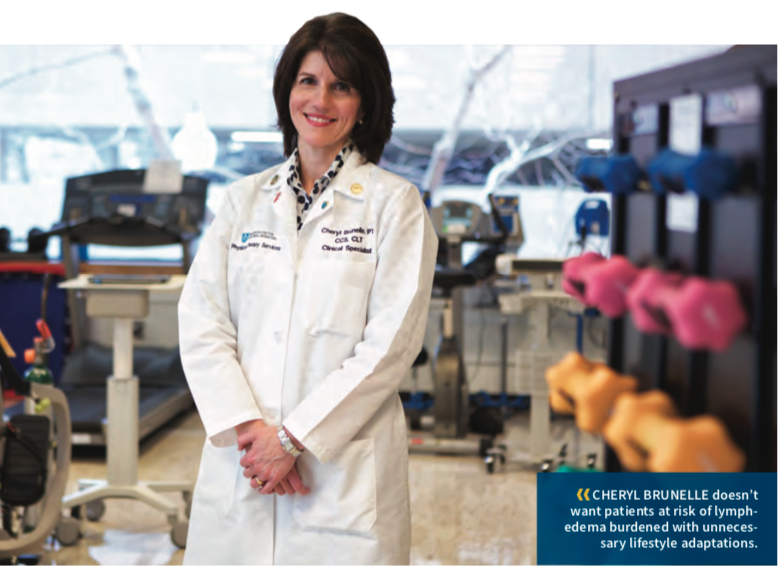 That’s why many people are quick to follow the National Lymphedema Network’s guidelines on how to prevent the condition or avoid flare-ups if it has already been diagnosed. These include avoiding needle sticks in the affected limb and wearing compression garments on long airplane flights.

But are these guidelines appropriate? They’re an excel- lent standard for people who have lymphedema, but not necessarily for survivors who don’t have the condition, says Dr. Alphonse Taghian, clinical director of breast cancer-related lymphedema at Massachusetts General Hospital (Mass General) in Boston.

“We’re in the middle of a crossroad on this topic,” says Taghian, who is also co-director of the institution’s breast cancer research program and a professor of radiation oncology at Harvard Medical School. “On the one hand, guidelines are asking patients to avoid all those factors: Don’t have an infusion in the affected arm or blood drawn or blood pressure taken; this has been around for many years and has been almost engraved in stone. However, there is more and more data suggesting that those precautionary measures are not built on any scientific evidence but are just anecdotal tales and fear.”

Cheryl Brunelle, a physical therapy clinical specialist at Mass General who has conducted studies on the topic with Taghian, adds: “Initially, these were meant to be behaviors someone would avoid if they had already developed lymphedema, but it was expanded to every patient at risk for lymphedema, as well, so for the last couple of decades, patients at risk (of) and with lymphedema have been told the same thing.”

In a study, Taghian, Brunelle and their colleagues screened patients for lymphedema before surgery and every six months thereafter. The researchers found that air travel, a skin puncture, blood pressure checks and exposure to extreme temperatures were not significantly associated with lymphedema. “That triggered the discussion all over,” Taghian says. “Recently, at an international conference, we presented all our evidence that those (and related) precautionary measures are not based on any scientific evidence, and there is a coming meeting of the National Lymphedema Network where we’ll take it a step further to have a discussion with our peers to see whether we can relax these precautionary measures because of the anxiety they can cause to patients.”

In a survey of over 900 patients treated for cancer, 90% said they were instructed to follow the guidelines, and more than 90% of that group did, Brunelle notes: “Over half of women said this negatively affected their lives, so this was one of the main reasons we wanted to delve deeper into this issue.” Those results lack the strength and certainty of a large prospective trial or registry, but they do offer some reassurance that relaxing the rules might be reasonable, she says. 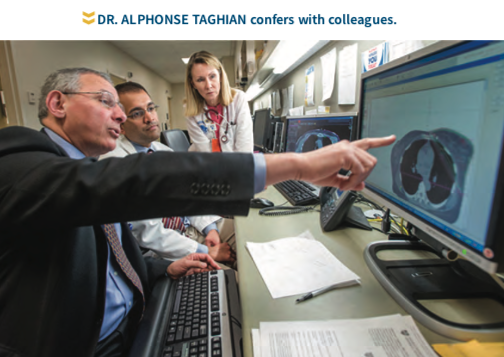 Although the American Society of Breast Surgeons stands behind a lenient set of guidelines for those at risk of lymphedema, other organizations take a stricter stance. “This is confusing the patients about which one they should follow,” Taghian says. “That’s why we hope that all organizations will come together to have common guidelines. ... Conducting a phase 3 randomized trial will put an end to this discussion.”

In the meantime, Taghian and Brunelle encourage survivors who do not have lymphedema but may face risk to live by these rules:

Recognize symptoms. Survivors should be aware of the signs of lymphedema and, should any arise, immediately check in with their doctor or physical therapist. Unusual tightness of a ring or bracelet or heaviness in the arm can hint that lymphedema is developing, even if measurements of the affected limb don’t show increased volume, Taghian says. “When treated early, it is so much more easily treated than when it’s left alone — that’s why we screen,” Brunelle adds. “It’s been a very nice evolution to see fewer and fewer patients with a large, swollen, very symptomatic arm. If patients feel differences in an arm, they should seek
guidance from their oncology team.”

Prevent cellulitis. This bacterial skin infection can be contracted through a crack or break in the skin, causing swelling, redness, pain and warmth to the touch. Untreated cellulitis can spread to lymph nodes and the blood and become deadly.

Cellulitis and other kinds of trauma are strong predictors of lymphedema in breast cancer survivors, so preventing the infection is important, Taghian says. If cuts, scrapes or insect bites occur in the at-risk limb, the area should be cleaned well and monitored for proper healing. If signs or symptoms of infection appear, the patient should seek medical advice immediately. Early treatment is imperative.

Follow an approved exercise regimen. A guideline-changing study about exercise was published in 2008, according to Brunelle. “Before that, we had pretty consistently told patients to not do any vigorous activity with their limbs — no resistance exercise with the (affected) arm,” she says. “When that study came out, for both patients at risk and those with lymphedema, it found that, in fact, exercise did not increase the incidence of or worsen lymphedema in either group. Since then, it’s been a very well-accepted recommendation for patients: They need to exercise, and there are guidelines on how to do that. However, supervision of that exercise and individualization are important.”

Screen early and often in higher-risk cases. Breast cancer survivors with a body mass index over 30 face a higher risk of lymphedema and require close observation, as do those who have received specific types and doses of surgery, chemotherapy and/or radiation or had numerous lymph nodes removed, Taghian says: “The more we know about patients’ individual risk factors, the better the decisions we can make about how closely to screen them.” 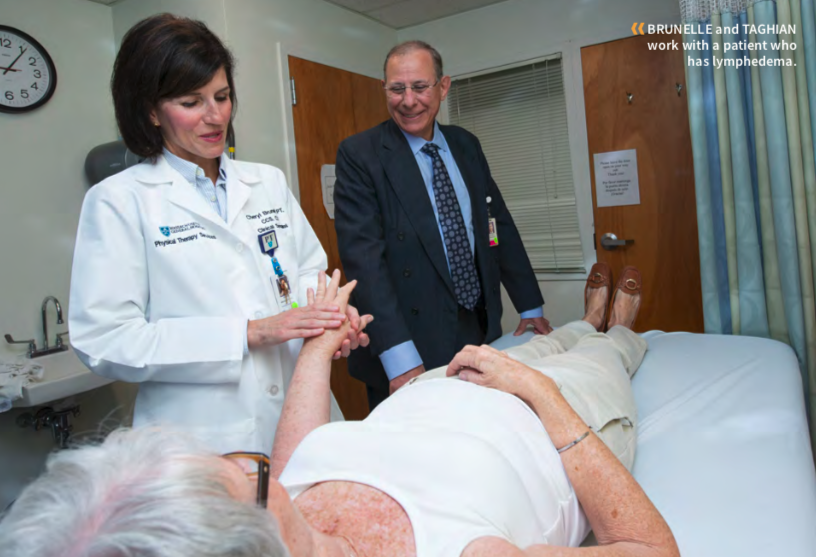 Since 2005, he and his colleagues have screened over 5,000 women preoperatively to measure the volume of the limb that might later be affected by lymphedema. “Without preoperative measurement, we can misdiagnose lymphedema 50% of the time,” he says. Not all cancer centers have lymphedema screening programs, so survivors should ask their care teams how they can get these services.

The medical community is still refining its advice about the best time to intervene when signs of lymphedema appear. “Historically, we treated at 10% volume change relative to preoperative baseline,” Taghian says. “The question now is: Should we treat earlier? There are a couple of groups studying that.”

Treatment can include compressing the limb with a multilayer bandage or compression garment, manual lymph drainage, skin care practices and exercise.

Don’t assume that surgery is the answer — yet. Over the past few years, two surgeries to prevent or resolve lymphedema — lymphovenous bypass and vascularized lymph node transplant, or transfer — have grown in popularity. Lymphovenous bypass is micro-surgery that builds connections between lymphatic vessels and veins, allowing fluid to get around the damaged area. Vascularized lymph node trans- plant replaces lost nodes, and the microvessels that feed them, with those from elsewhere in the body. The procedures aren’t labeled curative and remain limited to a handful of cancer centers.

Taghian says that these techniques are promising, but it’s too soon to rely on them as a general solution. First, experts must consider the results of a clinical trial comparing the lymphedema incidence and severity of survivors who undergo surgery with those who don’t.

Stick to the guidelines until the medical community says otherwise. “It would be wrong to initiate new guidelines without due process, so we are going by the book for now,” Taghian says. “It’s important for us to make sure that we’re doing the right thing for cancer survivors. Based on the evidence in studies, though, updated guidelines should be coming soon.”

Don’t sweat a broken rule. “If, by chance, a patient had their blood pressure measured, got an infusion or had blood drawn from their affected arm or took a long plane flight, they should not be alarmed,” Taghian says. “There is no evidence that something imminent will happen. That’s really important for patients to know, because that is the reason for their anxiety.”
Continue the conversation on CURE’s forum. >>
Talk about this article with other patients, caregivers, and advocates in the Breast cancer CURE discussion group.