Breast Cancer Gets a Boost From Immunotherapy

Immunotherapy takes on a new role in treating patients with triple-negative disease.
BY Heather Stringer
PUBLISHED September 23, 2019
In 2012, Brenda Berchtold was running out of breast cancer treatment options when her oncologist in Baltimore suggested one other possibility: immunotherapy. Dr. Leisha Emens was leading a clinical trial for Tecentriq (atezolizumab), and Berchtold would receive infusions once every three weeks for nearly a year.

The 55-year-old mother of two had received a diagnosis of cancer in her right breast in 1986 after she felt a pea-size lump during a self-exam. Results of a biopsy showed that the cancer was estrogen receptor negative, progesterone receptor negative and HER2 negative, which meant she had an aggressive form of disease known as triple-negative breast cancer. She underwent a lumpectomy followed by radiation and enjoyed seven years of remission. But then the cancer returned. 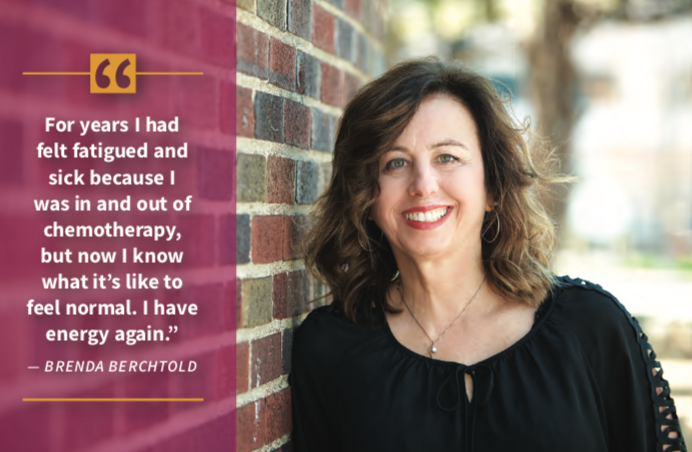 Triple-negative breast cancer does not respond to hormonal therapies or drugs that target the HER2 protein, and Berchtold endured multiple rounds of chemotherapy over the years only to see the cancer eventually return in her right breast. In 2009, she underwent a bilateral mastectomy, but a year later, scans showed evidence of cancer in her lymph nodes and sternum. Emens, who is now co-leader of the UPMC Hillman Cancer Center’s Immunology and Immunotherapy Program in Pittsburgh, Pennsylvania, suggested that Berchtold enroll in a vaccine trial, but her cancer progressed while she was on the trial. That’s when Emens suggested the Tecentriq trial.

Finally, in 2013, Berchtold received good news after 12 weeks of treatment. The results of a CT scan revealed a significant reduction in the size of her tumors. She was also relieved that the side effects she experienced from the immunotherapy, such as muscle weakness, fatigue and facial swelling, were much more tolerable than what she had experienced during chemotherapy. The symptoms were the result of a common side effect known as hypothyroidism and could be treated with medication. By 2016, the scans showed no evidence of disease in her body.

“It was like hitting the lottery,” Berchtold says. “For years I had felt fatigued and sick because I was in and out of chemotherapy, but now I know what it’s like to feel normal. I have energy again.”

Berchtold was part of a phase 1 clinical trial that prompted further clinical trials for Tecentriq, a programmed death-ligand 1 (PD-L1) checkpoint inhibitor that prevents cancer cells from hiding from the immune system. Although she took the medication as a single agent, later studies showed the drug to be more effective combined with chemotherapy. In March, the drug became the first immunotherapy approved by the Food and Drug Administration (FDA) in combination with Abraxane (nab-paclitaxel), a type of chemotherapy, for patients with triple-negative breast cancer that cannot be surgically removed and is locally advanced or metastatic. The other requirement for receiving the drug is that immune cells in the tumor must test positive for the PD-L1 protein.

The approval was based on the results of the phase 3 IMpassion 130 trial, which included 902 patients with metastatic triple-negative breast cancer who received chemotherapy with either Tecentriq or a placebo. The study showed that in patients who were PD-L1 positive, the median overall survival for the immunotherapy group was 25 months compared with 18 months for the placebo group.

“We haven’t had very good treatment strategies for triple-negative breast cancer, and to see more than a nine-month improvement in overall survival for a population that is typically given 12 to 18 months to live is really compelling,” says Dr. Heather McArthur, medical director of breast oncology at Cedars-Sinai Medical Center in Los Angeles. “There is incredible enthusiasm in the medical community about immunotherapy strategies.”

NOVEL METHODS OF UNCLOAKING CANCER
Although the approval is being celebrated by the breast cancer community, immunotherapies were available years earlier for patients with melanoma and lung, kidney or bladder cancer. “This is because these cancers are more likely to have highly mutated proteins that could be recognized as foreign by the immune system,” Emens says. “Breast cancer is less likely to have a lot of mutations.” The cancers that have more mutations are typically induced by exposure to environmental factors like sunlight or smoking. Breast cancer does not have such a clear carcinogen exposure, Emens says.

Triple-negative breast cancer, which accounts for about 15% to 20% of all breast cancers, has traditionally been treated with chemotherapy, which can cause side effects including hair loss, nausea, fatigue, peripheral neuropathy and low blood counts. Triple-negative breast cancer was the first form of the disease targeted for immunotherapy trials because these tumors have higher levels of T cells known as tumor-infiltrating lymphocytes that can become activated by checkpoint inhibitor drugs. In the early studies when immunotherapy was used as a single agent, the response rate was about 10%, but then researchers started combining Tecentriq with chemotherapy and response rates improved.

“The IMpassion data showed that immunotherapy has a role in breast cancer,” says Dr. Jennifer Litton, a breast medical oncologist at The University of Texas MD Anderson Cancer Center in Houston. “Now researchers are exploring the potential benefits of combining immunotherapy with other treatments like radiation, different chemotherapies, vaccines and other immunotherapies.”

McArthur has been studying the combination of the checkpoint inhibitor Keytruda (pembrolizumab) with radiation in patients with metastatic triple-negative disease. “In this process, the tumor is being broken down by the radiation into tumor fragments, and this triggers a response as the immune system tries to clean up the debris,” McArthur says. Of the 17 patients in her recent study, 33% experienced a partial response, and one woman had such an exceptional response that she has no evidence of disease. She finished treatment more than a year ago and does not require maintenance therapy. The encouraging results from the metastatic study motivated McArthur and her colleagues to explore whether radiation with immunotherapy could benefit patients who receive the combination in the early stages of the disease.

Researchers have also studied the potential advantages of combining Keytruda with chemotherapy in women with early-stage breast cancer. In one phase 2 study, women with stage 2 or 3 locally advanced triple-negative or hormone receptor-positive/HER2-negative breast cancer received chemotherapy alone or with Keytruda before surgery.

“We found that adding immunotherapy to chemotherapy tripled the likelihood of a complete response,” says Dr. Rita Nanda, associate professor of medicine and director of breast medical oncology at University of Chicago Medicine. “That meant there was no cancer left at the time of surgery.” The results led to an ongoing phase 3 trial, and if this study confirms the earlier results, this could become a new standard of care for early-stage breast cancer, Nanda says.

Although the side effects of immunotherapies usually are less debilitating than those of chemotherapies, some patients may experience serious toxicities because of these novel drugs, cautions Dr. Elizabeth Mittendorf, director of the Breast Immuno-Oncology Program at Dana-Farber/Brigham and Women’s Cancer Center in Boston. Diarrhea or abdominal pain may be a sign of colitis, and worsening cough, shortness of breath or chest pain may be symptoms of pneumonitis. Hormone gland problems and hepatitis are also possible side effects. These patients may need to temporarily stop immunotherapy until their problems are resolved, or they may require treatment with steroid. “The health personnel answering the phones for these patients need to have a different threshold than for symptoms resulting from chemotherapy,” Mittendorf says.

EXPANDING IMMUNOTHERAPY OPTIONS
Breast cancer vaccines have also garnered attention as another strategy for stimulating an immune response. Cancer cells often have molecules known as antigens on their surfaces, and the vaccines help T cells “remember” these proteins when it’s time to launch an attack to prevent recurrence. “By themselves, the T-cell-eliciting vaccines that our group has been studying are not enough to stimulate an immune response that can eliminate a tumor, but we’ve presented some data suggesting that vaccines might work nicely with trastuzumab,” Mittendorf says. Herceptin (trastuzumab) is a monoclonal antibody that targets the HER2 protein in breast cancer.

Although Tecentriq has been approved as initial therapy in combination with chemotherapy to treat PD-L1 positive metastatic breast cancer, researchers are also investigating novel approaches to the timing of immunotherapy during treatment. Dr. Antoinette Tan, chief of breast medical oncology at Levine Cancer Institute at Atrium Health in North Carolina, was interested in exploring the potential benefits of administering chemo- therapy alone before starting the combination of chemo- therapy and immunotherapy. She is leading a clinical trial for patients with HER2-negative metastatic breast cancer, and one group is receiving chemotherapy alone for two cycles before including Keytruda. The second group is taking both treatments upfront. 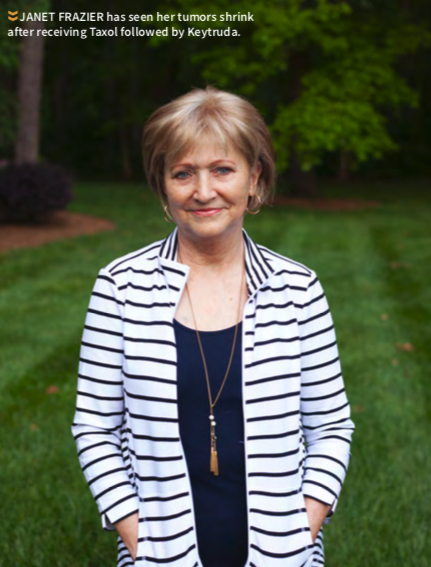 Participants are also providing biopsy samples before and after treatment so the researchers can test for biomarkers like PD-L1 and tumor-infiltrating lymphocytes. “Using the tumor tissue samples, we hope to identify which biomarkers can be used to predict who will respond better to the different treatment sequences,” Tan says.

Janet Frazier, 63, recently joined this clinical trial after multiple rounds of different chemotherapies failed to stop a recent progression of the disease. Frazier, who received a triple-negative breast cancer diagnosis in 2009, had enjoyed six years of remission following chemotherapy, surgery and radiation, but then she discovered a bump on the back of her head and another one on her abdomen.

“I had been told that if triple-negative cancer responds to treatment and doesn’t come back for five years, then the odds of recurrence decrease,” Frazier says.

She saw her family doctor and a general surgeon, and both believed she had a cyst on the back of her head and a fatty lipoma — a benign tumor — on her abdomen. But Frazier’s dermatologist urged her to have the lumps biopsied due to her history of cancer. In 2016, Frazier learned that the lumps tested positive for triple-negative breast cancer, and scans revealed that the cancer had spread to her lungs, brain, abdomen and lymph nodes.

“I had never dreamed that my cancer would come back as skin bumps,” says Frazier, who lives in Davidson, North Carolina. “It was devastating news.”

Tan considered the Keytruda trial, but Frazier was ineligible due to the tumors in her brain. After two years of chemotherapy, multiple radiation treatments to individual brain tumors and, finally, whole brain radiation, she was able to participate. Frazier started receiving the chemotherapy drug Taxol (paclitaxel) for six weeks and added Keytruda in December 2018. After six weeks of immunotherapy, she heard good news for the first time in 18 months: The tumors were either stabilizing or shrinking. That trend has continued.

In 2009, Frazier’s prayer was to live long enough to see her son, a senior in high school, graduate. Since then, she’s had the opportunity to attend his U.S. Naval Academy graduation and her daughter’s wedding. “I’m just so happy that I’m on the right track,” Frazier says. “I have hope.”

Though stories like hers encourage further exploration of immunotherapies, researchers acknowledge that many unanswered questions remain, and many patients do not respond to the currently approved immunotherapy. In the IMpassion study, most of the original 900-plus enrolled have not yet reached 25 months of follow-up, Mittendorf says, and must continue to be followed for clinical outcomes.

“We need an improved understanding of who is and is not responding to immunotherapy, who will develop toxicities, how to treat patients once they progress on immunotherapy, and how to make other subtypes of cancer susceptible to immunotherapy,” she says. “But the recent FDA approval has reinvigorated enthusiasm in the field to continue investigating these treatment strategies.”
Be the first to discuss this article on CURE's forum. >>
Talk about this article with other patients, caregivers, and advocates in the Breast Cancer CURE discussion group.