An expert sheds light on the importance of genomics in treating lung cancer.
BY Katie Kosko
PUBLISHED July 27, 2020
In the past decade, researchers discovered several genomic mutations that help drive lung cancer. The main ones occur in the EGFR, ALK, ROS1, NTRK and BRAF genes, and now there are several therapies that work by directly targeting these changes.

In an interview with CURE®, Andrew Ciupek, who holds a doctorate in cancer biology and serves as clinical research manager at the GO2 Foundation for Lung Cancer, a patient advocacy group, discussed the importance of biomarker testing and retesting for all patients with non-small cell lung cancer to determine if their tumors harbor any targetable mutations. 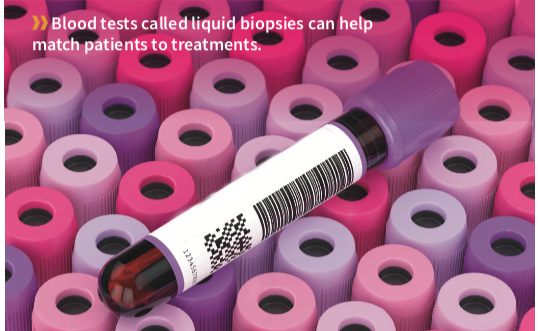 CURE®: How has genomic testing come into play for non- small cell lung cancer?
Ciupek: It’s become almost an essential part of non-small cell lung cancer treatment, and the reason is the approval of targeted therapies that we have seen. To know which targeted therapy may be an option for a patient, one first needs to know if a patient has one of those mutations or changes. That’s where biomarker testing comes into play. The doctor can do a test on a tumor to look for any mutations or changes, and if they match to a targeted therapy, the patient can be started on that. Without biomarker testing, someone may not know if they are receiving a treatment that may work for them. We tell everyone that it’s really important to have this conversation about biomarker testing.

What can be done for someone who has already received a diagnosis?
A lot of biomarker testing is done on tumor tissue, but testing can be done with blood, which is called a liquid biopsy or blood-based testing. (Liquid biopsy) can help patients who have already received a diagnosis and may have started their treatment. A lot of times, a second biopsy is difficult to do or is not feasible, (but) blood-based testing can be done at any time during treatment. If someone hasn’t had biomarker testing at diagnosis, or even if they had testing before, getting tested again, particularly if they are on a therapeutic option that may not be working as well anymore, is important. Sometimes the cancer can change, and new changes or mutations can appear that may not have been there before. It’s not just a one-and-done type of thing.

Can you provide an example of a biomarker and the accompanying targeted therapy?
The main mutations that we have Food and Drug Administration-approved targeted therapies for include EGFR, ALK, ROS1, NTRK and BRAF. If biomarker testing
is done and the doctor finds out that a patient is EGFR- positive, that patient can be started on a targeted therapy called Tagrisso (osimertinib). What we find is that Tagrisso is a better therapeutic option than a lot of other things if someone has an EGFR mutation. It actually does better than immunotherapy for patients with an EGFR mutation, so knowing that information can put a patient on a better therapeutic path.

Are there any clinical trials that patients with some of these biomarkers should know about?
Although targeted therapies may work for patients for a very long time, the cancer may start to grow again, unfortunately, or the drug may not be working as well. Clinical trials are looking at drugs that will work after the first targeted therapy stops working. The second reason to consider a clinical trial is that we have an approved therapy for only a few mutations, but many, many mutations can occur in a non-small cell lung cancer tumor. A lot of active clinical trials are looking at targeted therapies for mutations or changes that we don’t have a therapy approved for yet. When someone has biomarker testing and results come back, there may be a change for which we don’t have an approved therapy, but that may point them toward a clinical trial that has a therapy in development.

Andrew Ciupek, Ph.D., is manager of clinical research for GO2 Foundation for Lung Cancer, where he leads implementation of research studies within the foundation’s Care Continuum Centers of Excellence and acts as a navigator for its treatment and clinical trial navigation program, LungMatch. Originally a translational cancer researcher, Ciupek transitioned to patient advocacy to have increased impact on driving patient-centered research.
Be the first to discuss this article on CURE's forum. >>
Talk about this article with other patients, caregivers, and advocates in the Lung Cancer CURE discussion group.