Dark Days: Depression May Precede A Cancer Diagnosis In Some Cases

It’s no surprise that patients with cancer might become depressed, but now researchers say depression could precede a diagnosis. Here’s what you should know about the link between these two conditions.
BY Amy Paturel
PUBLISHED February 13, 2020
When Julie N. of Michigan City, Indiana, was in her early 40s, she became overwhelmed by her life as a mother, wife and nurse. She had never before struggled with depression, but in those dark days during the prime of her life, she could barely pull herself out of bed.

She wasn’t eating. She wasn’t sleeping. She dropped from 130 to 105 pounds and navigated her days in a fog.

“I wasn’t interested in doing things I normally enjoyed,” she says. “Looking back now, I can see I was struggling with depression.” Her low period began at least a year before she received her diagnosis of breast cancer in 2008 at age 45. After she received the diagnosis, the depression became so consuming that she attempted suicide — not once but twice. 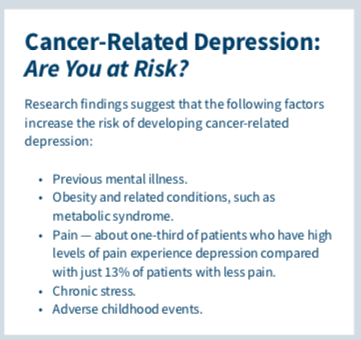 Cancer alters everything, from appearance to appetite. The disease can steal a person’s identity, livelihood and even quality and quantity of life. Treatments come with their own deleterious side effects, including nausea, fatigue and hair loss. So, it’s no surprise that the rate of depression among patients with cancer is three to five times higher than that of the general population.

“Cancer produces profound biological effects on the body that can alter behavior,” explains Dr. Michael Irwin, Cousins Distinguished Professor of Psychiatry and Biobehavioral Sciences at the David Geffen School of Medicine at UCLA. “When immune cells go in to try to destroy cancer cells, it triggers an inflammatory response in the body, which can contribute to the onset of depressive and anxiety symptoms, as well as sleep problems.”

Feeling sad and even hopeless may be part of the expected fallout of a cancer diagnosis, but a growing body of research suggests a far more insidious link — that depression is actually part of the disease process.

Scientists are working hard to determine who is most at risk of developing cancer-related depression, which cancer types have the strongest link with emotional problems and whether treating depression improves cancer outcomes.

Over the past decade, research has uncovered a strong association between cancer and emotional problems. Scientists theorize that something more troubling lies beyond the commonsense explanation that “learning you have cancer is depressing.”

“There are a number of psychological factors that come into play when someone receives a cancer diagnosis,” says Dr. Andrew H. Miller, William P. Timmie Professor of Psychiatry and Behavioral Sciences and director of the behavioral immunology program at Emory University School of Medicine. “But many people don’t realize cancer itself can lead to the release of molecules that enter the brain and cause depressive symptoms even before the cancer is discovered.”

Research suggests that inflammation is a key player. When the immune system goes on the attack, it floods the body with inflammatory substances called cytokines.

Elevated levels of immune cytokines, even at moderate levels, have been linked to learning difficulties and emotional problems, so it makes sense that triggering the body’s natural immune response to cancer increases the risk of developing depression alongside the disease.

“About 30% of people with regular depression who are not medically ill have increased inflammation as part of their depression. In the cancer population, that rate slides up closer to 50%,” Miller says.

Once cancer activates the immune system, in an effort to conserve energy, the brain gets the message to slow down and redirect all available resources to attacking the disease. Concentration suffers; processing speed takes a hit; and patients can feel, well, depressed.

“This protective response is evolutionarily derived. It’s how your immune system and brain respond to the fact that you’re sick,” Miller says.

Even giving people immune cytokines in the lab can produce a “sickness behavior syndrome” within minutes, causing fatigue, anxiety, impaired cognition and changes to appetite and sleep — symptoms often found in people with depression.

Although depression is the most researched psychiatric disorder in cancer, studies are at odds about its prevalence. Depression rates among patients with cancer range from 3% to nearly 60% and are highest among people with cancers that have the poorest prognoses: lung, aggressive breast and pancreatic.

Dating back to 1967, researchers noted that up to half of the patients with pancreatic cancer experience depressive symptoms before the diagnosis. More recently, two literature reviews, one from 1993 and one from 2015, reported that 33%-45% of patients with pancreatic cancer experienced psychiatric symptoms before physical symptoms.

“Pancreatic cancer seems to be especially susceptible to pre-diagnosis depression, probably because the pancreas secretes mood-stabilizing hormones, neurotransmitters and digestive enzymes — and pancreatic cancer is a rapidly growing cancer that produces a strong inflammatory response,” Irwin suggests. Lung cancer, too, is frequently linked with depressive symptoms. In a 2017 study published in Psychiatric Investigations, researchers reported that among the 10 common cancer types in South Korea, depression is most prevalent in patients with lung cancer (11%). Gender-specific cancers such as breast, cervical and prostate also show a relatively high prevalence of depression, hovering between 8% and 9%.

Holly Kapherr Alejos of Orlando, Florida, was just 34 when she discovered she had breast cancer, specifically invasive ductal carcinoma. Newly married, settling into a new job and planning for a family, Alejos was shocked when she got the diagnosis.

“I took care of my body. I ate healthy foods. I didn’t smoke or drink to excess. I did all of the things you’re supposed to do to avoid a major health crisis,” she says. “And yet, I had cancer at an age when I shouldn’t have to face a life-threatening diagnosis.”

Alejos set aside her emotions and shifted into autopilot, navigating a daunting schedule of appointments with oncologists, fertility specialists and plastic surgeons. She received her diagnosis in April 2018, went through in vitro fertilization in late April, underwent breast cancer surgery in May and started six cycles of chemotherapy in June, followed by 20 rounds of radiation.

It wasn’t until she completed her last radiation treatment in December 2018 that her emotions spun out of control. “I was angry, resentful and sad. By the end of March, I was crying every day, and I knew I needed to get help,” Alejos says.

But depression exacts a greater price than emotional upset. There’s solid evidence that depressed patients with cancer die long before their counterparts who feel happier.

In a study of 205 patients with cancer who were followed for 15 years, published in Psychosomatic Medicine in 2003, researchers reported that having symptoms of depression was the most consistent psychological predictor of shortened survival time.

Other studies associate depression and anxiety with poorer treatment outcomes, difficulty making treatment decisions, reduced adherence to lengthy regimens and longer hospital stays. Although not adhering to treatment explains part of the increased risk of death among depressed patients versus nondepressed patients, studies suggest that the chronic stress response — and the resulting inflammation — may also encourage tumor growth.

Contributing to this damaging chain reaction is the fact that treatment itself can exacerbate depression. “When you treat a person for cancer, whether with chemotherapy or radiation, you’re killing tumor cells but you’re also damaging healthy cells,” Miller says. “That massive wounding in the body causes unbelievable levels of inflammation, which can reach the brain and lead to depressive symptoms.” The cycle restarts with a flood of pro-inflammatory cytokines that can contribute to cancer growth.

To address this negative feedback loop, cancer centers across the country are increasingly offering a holistic approach to disease management, one that includes psychological components. At the Cancer Treatment Centers of America in Zion, Illinois, Julie N.’s oncologist paired her with a social worker and mind-body counselor. Her medical team also encouraged her to see a local counselor weekly. The goal was to intervene before depression spun out of control.

Regardless of what triggers depression and anxiety, it’s important to both identify people who are at risk of developing these conditions and diagnose cases early in the disease process.

“Part of the problem is that depression is often underdiagnosed in people with cancer because people think, ‘Well, of course, you’re depressed. You have cancer,’” says David Spiegel, Samuel and Lulu Willson Professor in Medicine and associate chair of psychiatry and behavioral sciences, director of the Center on Stress and Health and medical director of the Center for Integrative Medicine at Stanford University School of Medicine.

“Cancer is not exactly a cheery diagnosis, but not everyone who is diagnosed with cancer develops depression.” With cancer, the level of depression and anxiety a person experiences can change over the course of the disease. According to research conducted by Leah Pyter, assistant professor of psychiatry and neuroscience at The Ohio State University Wexner Medical Center, and her colleagues, disturbances persist and may even worsen after successful cancer treatment.

“In a subset of cancer survivors, inflammation does not resolve even after the tumor is removed,” Irwin says. “There’s a lot of interest in knowing whether those people who continue to have inflammation are also at risk of continuing depression.”

Irwin notes that getting the right antidepressant at the start of cancer treatment can decrease the incidence and severity of depression. Unfortunately, the two main classes of medication for depression in cancer, tricyclic antidepressants and selective serotonin reuptake inhibitors, can worsen treatment side effects and impede effectiveness. For example, selective serotonin reuptake inhibitors can inhibit the activation of the breast cancer drug tamoxifen, making it less effective and potentially increasing relapse risk.

“You have to be careful in choosing the right antidepressant,” Spiegel says. Because inflammation undercuts the body’s production of the feel-good chemical dopamine, psychiatrists are increasingly turning to drugs that boost dopamine levels and enhance motivation. “When people are not productive, especially people who want to be engaged in the world and get things done, stimulants can help,” he says. These can include selective serotonin reuptake inhibitors, serotonin and norepinephrine reuptake inhibitors and other classes of drugs.

Not everyone who has depression or anxiety harbors cancer, but it’s important to be aware that cancer changes the body in ways that affect the brain. Wider knowledge of this link may drive a closer examination for depressive symptoms and lead to earlier diagnosis of both depression and cancer.

“Whether or not depression is a signal of cancer, depression is important in its own right,” says Annette Stanton, a professor of psychology and psychiatry/biobehavioral sciences at UCLA. “Just because you are depressed doesn’t mean you have cancer, and effective treatments for depression are available.”

In the cancer arena, the question of whether treating anxiety and depression can actually improve survival is an open one that is being investigated in the clinic and lab. In turn, the insights gleaned from these studies could lead to better treatments for cancer and its symptoms.

Alejos took advantage of treatments for depression. Now almost two years out of her diagnosis, she has been taking the antidepressant Effexor (venlafaxine) since March 2019 and began seeing a therapist that August. “Between my therapist and my antidepressant, I have been able to wrap my head around everything,” she says. “It has made my life so much better. Had I known about the link between depression and cancer, I would have started treatment for depression sooner.”
Be the first to discuss this article on CURE's forum. >>
Talk about this article with other patients, caregivers, and advocates in the Psychosocial Issues CURE discussion group.