Advocating for Patients With Cancer, Near and Far 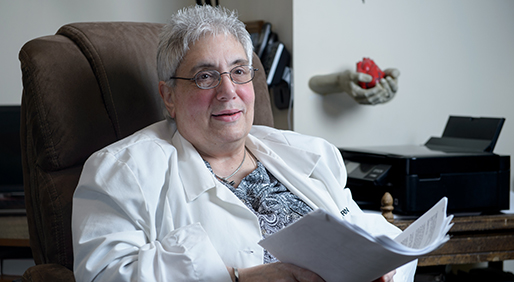 Carmi Fazio, RN, BSN, ONA - PHOTO BY KEN CARL
When patients of Molina Health Care need help, they call the managed care nurse Carmi Fazio, RN, MSN, ONA, or, if she hasn’t heard from them, she is the one doing the calling. She answers questions, educates about treatment and prepares patients for side effects with the admonition, “You call me if you have trouble.”

But the 80 to 90 patients she talks with every week just reflect her day job. At night, she volunteers to talk with patients from around the country and internationally whom she met while working as an online nurse moderator for a website offered by the American Cancer Society. The calls come from across the U.S. and from Scotland, Belgium, the Philippines or even Saudi Arabia.

In response to why she kept counseling these patients when she was no longer on the site, comes a speedy retort. “You can’t make a commitment to the journey and then walk away.”

Besides, Fazio adds, she learns a lot talking to these patients, many of whom don’t have the standards of care found in the U.S. They share their coping mechanisms with Fazio who can then pass them on to other patients she counsels. She can offer them education they may not receive in their home countries about the drugs they have been given. As far as waking at all hours, she says it’s not a problem since she cared for her father who lived upstairs and suffered from Alzheimers. “He woke a number of times a night, and I am a light sleeper, so answering calls is no problem.”

Fazio calls herself a late bloomer, not finding her path in life until her 40s while working as a floor nurse at an elite hospital. “I could see at the end of the hall past a glass wall that there was much more going on, and when I asked my manager what it was, she said it was the oncology unit and to work there I needed specialization in areas I didn’t have.” Fazio didn’t blink before she said, “Sign me up.”

From then on, it has been a dedication that anyone would call above and beyond. Fazio has bought her patients cell phones and paid for funerals when there were no funds. For patients who had to stay in town for treatment over the holidays, she brought them into her home so they wouldn’t be alone in a hotel. Her elderly mother still lives upstairs, and Fazio says her role is to add patients to her prayer list.

Fazio’s specialization in pain management and end-of-life care has also brought calls from oncologists across the country who ask her to call a dying patient because they don’t feel comfortable with end-of-life conversations.

Her greatest commitment to her patients comes in her focus on connection, because, she explains, most of them simply want to know someone is there in the moment. All her patients have her home telephone number because she is concerned someone may take over their pain management who doesn’t understand the patient or their drug regimen.

Fazio says that when she thinks of all the men and women she has worked with, there is no doubt that she has learned much more from them than they have from her.

For those whom she has been with to the end, she says it is like “watching angels take flight.”
Be the first to discuss this article on CURE's forum. >>
Talk about this article with other patients, caregivers, and advocates in the General Discussions CURE discussion group.