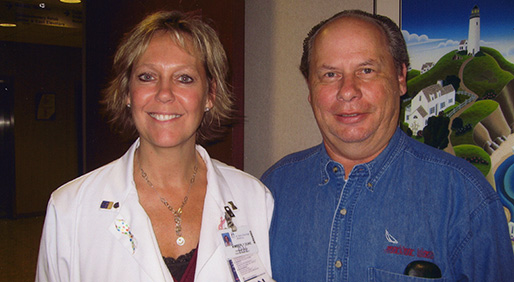 Kimberly Duke, RN and Raymond Dziolowski PHOTO COURTESY OF RAYMOND DZIOLOWSKI
I am a prostate cancer survivor for eight-and-a-half years now, and I feel great. It all started back in 2007. I was told by my urologist that he suspected that I might have prostate cancer. I had some tests, and he said that I should have a biopsy done to be sure. I had three, and the third one showed that I had cancer. At this point, I would have to meet with the team that was going to treat me, Dr. Paul Chuba and nurse Kimberly Duke, at St. John’s Hospital in Warren, Michigan.

When I went to the hospital to meet with the team that was going to take good care of me, I must tell you, I was very scared. I didn’t know what to expect. This was all new to me. I had just recently retired and bought me a new Harley motorcycle. I wanted to start enjoying my retirement. I didn’t need this.

One of the team members was Kimberly Duke, a nurse navigator at St. John’s Hospital. When I first met with Kim, she told me that men my age (57) usually have their prostate removed. Since I was diagnosed early (stage T2), I told Kim that I was not going to have it removed. I asked her if she had a small cavity in her tooth, would she have it removed? She thought that was funny, and said no, she wouldn’t.

Then Kim mentioned something about external radiation beam therapy. I told her no again. I told her that if something goes wrong and they miss my prostate, I would be having more problems than prostate cancer. Also I ride a motorcycle, and it wouldn’t look cool if I had to mount one of those bags on the side of my bike. The last suggestion was brachytherapy treatment. I said, "Sure. That sounds better." I’m glad I chose this treatment.

That day I called her my “Guardian Angel.” I bought her a sun catcher for her window. It says: “Prayer Changes Everything.” on it and gave it to her. She cried and said that nobody does anything like this for the nurses. I told her that she helped me so much that I needed to do something nice for her. This was eight-and-a-half years ago, and I still see her. I go to the hospital and get her flowers for Nurse’s Week. I know that this is her job taking care of her patients. And she does it so well. Kim loves being a nurse and taking care of her patients. Kim is one of the sweetest and kindest people that anyone could meet. Kim is more than just a nurse — she’s an angel in my eyes. When I was going through my most difficult and frightening time, Kim was there to comfort me and to make it easier. I’m sure that there are a lot of other good nurses out there but Kimberly is mine.
Be the first to discuss this article on CURE's forum. >>
Talk about this article with other patients, caregivers, and advocates in the General Discussions CURE discussion group.