An Extraordinary Nurse Gave My Husband an 11-Year Lifeline 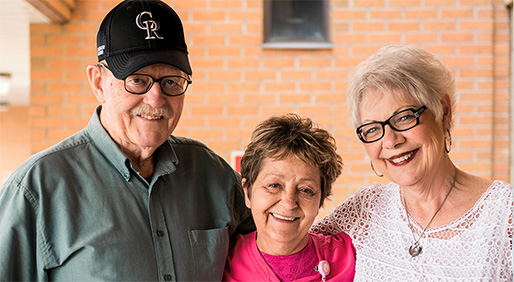 Jim Amundson, Sally Durham, RN, and Mona Amundson. - PHOTOS BY JENNIFER RAY PHOTOGRAPHY
Since July 2005, Sally Durham, RN, has taken care of my husband, Jim, and me. In May 2005, Jim was diagnosed with diffuse large B-cell lymphoma. Two weeks later, I was diagnosed with aggressive invasive breast cancer. With both of our heads in a tailspin, Sally calmed us while hooking us both up to chemo for the next few months. She would make sure that our chemo appointments were scheduled at the same time in the same room. She would make sure we were warm, comfortable, hydrated and well-fed! She answered questions and provided information about our diagnoses, treatment and complications. She became our best friend and confidante during a very scary time in our lives.

Fortunately, I sailed through my regimen with flying colors. No sickness, no infections, no problems. Jim, however, was not so lucky. He developed a serious infection and ended up in the emergency room several times during his treatments. Because we live in a very rural area, we only see our oncologist during bimonthly outreach visits. Sally was our main local oncology expert, and she was always on top of every medical emergency and need, and kept in contact with us continually. When Jim would end up in the hospital, she would stop in to check on him. Between chemo treatments, she called and checked on both of us, making sure things were going OK.

She contacted the doctor for us when needed, and made sure we knew what to expect at every turn of events. She was our lifeline during that whole year.

Thankfully, both of us went into remission, and things went well for five years. In November 2010, the shoe dropped again when Jim was diagnosed with Burkitt’s lymphoma in his colon. Again, he ended up having to have a very aggressive regimen of chemotherapy. Sally gave him chemo every three weeks, and then we had to drive 270 miles the following week for another type of chemo that had to be administered at a cancer center. When we would get home again, Sally would call and check on us constantly until we saw her again for another round of chemo. Again, during this time, Jim had several complications from the chemo and developed blood clots, infections and neutropenia. There were several times that he ended up in the local ER. He would be either in the local hospital or flown to the cancer center. Sally monitored the ER reports and made sure that the oncologist knew everything that was going on. Again, she was our lifeline for months!

Once again, Jim went into remission and everything went well, until November 2014. Jim’s lymphoma has now come back as a low-grade cutaneous lymphoma. His regular oncologist retired, and he now has a new oncologist. Thankfully, Sally is still his oncology nurse, and she has made the transition between the two doctors very relaxed and stress-free. Sally has been administering maintenance chemo to Jim for the past two years. It has been a rather mild chemo compared with what he has had to endure in the past, but his veins have been damaged to the point that Sally insisted that the doctor order another power port. He now has a port to make his treatments far easier. The chemo has also caused heart damage, and Sally was instrumental in identifying symptoms and referring him to a provider for further treatment.

We have been told by Jim’s new oncologist that his current lymphoma is controllable but not curable. We have come to the realization that he will need some sort of cancer treatment for the rest of his life. We are so thankful that Sally is still Jim’s oncology nurse, and dread the thought of her someday deciding to retire. We credit Sally with keeping Jim alive and enjoying his life for the past 11 years. We both feel that Sally deserves the recognition as one of the best and most compassionate oncology nurses ever, and we are so blessed to have her in our lives and in our community!
Be the first to discuss this article on CURE's forum. >>
Talk about this article with other patients, caregivers, and advocates in the General Discussions CURE discussion group.