The Magic Fit of Oncology Nursing 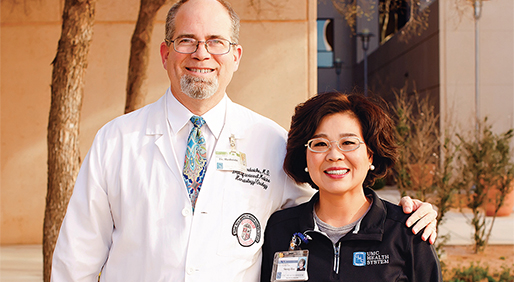 Fred Hardwicke, M.D., and Seong-Hee Cheon, RN, OCN - PHOTOS BY LAUREN CLARK
It was a wonderful fall morning in Lubbock about six years ago, but the minute I walked into the nurses’ room of the Southwest Cancer Center’s infusion area, I knew that there was something very wrong. Something dreadful. It didn’t take the nurses long to explain the situation. There is an east-to-west road between the University Medical Center/Southwest Cancer Center and the far parking lots, and twice a year in the spring and the fall the morning and evening sun blinds your eyes, as it did that morning. Despite the lower speed limit and the crosswalks, the risks are very real, and we think that a driver who saw Seong- Hee Cheon, our infusion nurse, too late actually hit the accelerator rather than the brake, resulting in a nasty pedestrian/automobile accident. Seong-Hee came to the emergency room in tremendous pain, with one crushed foot/ ankle, and, on the other side, a broken femur. And I joined her oncology nurse friends in stunned disbelief that this was happening, hoping and praying that she would recover.

I called two patients to recruit them for prayer. And I left that day thinking, “Does something like this have to happen to make you realize how much someone means to you?” One of those two patients was an older man who was a veteran of the Korean War, who had returned withnerve damage from the brutal winters. A quick bond had formed with Seong- Hee, who is a Korean-American, and throughout his years in treatment, he always wanted her to run the infusion. Sadly, he passed away earlier this year.

The other patient presented over eight years ago with metastatic and locally advanced HER2- overexpressing breast cancer and is still doing well today. In the hospital, she received chemotherapy and medication, along with fluids to control her high calcium. Once the HER2 status was known, she came into the infusion center with her walker to get her first trastuzumab dose. With all of her bone metastases, she was really struggling. But she didn’t just need trastuzumab. She needed a friend, and she found one that day in Seong-Hee. Her hospitalization came with its share of bad news, and worse, she felt hurt by the words of one physician she encountered. Seong-Hee saw the patient’s condition and responded with empathy and kindness, and even hugs, as her patient improved. This patient actually postponed port placement for two years, but Seong-Hee was always able to place the IV to keep the treatments going on schedule. Seong-Hee is by nature the soft-spoken nurse who brings much-needed peace and calm to the atmosphere. Combine this with a pleasant smile, and you can see why nursing is the magic fit for her.

While Seong-Hee was in the hospital, we saw that she got a CD player to play music in an effort to divert her thoughts from the pain. She went quickly to the operating room for a long femoral metal rod, and after several days was transferred to a rehab hospital for a few more weeks. Toward the end of the year, she returned to The Cancer Center to work for a few hours a week, still struggling with mobility and pain. Gradually, her work and responsibilities increased. The car could crush her foot, but not her spirit. Now the entire episode seems like a distant memory.

In my estimation, being a chemotherapy infusion nurse is usually a hard road to travel. For one thing, your technical skills are challenged every day. Second, the patient load and schedule can take you to your limit. Finally, there are those deeper questions. How much chemotherapy is enough? Do oncologists push their patients too far? Can we justify some of these heroics on patients with advanced cancer when, in so much of the world, diarrhea cases routinely take the lives of young children for lack of basic measures related to fluids and electrolytes? I would add that the medical oncologist’s task can often be separated from the deeper personal interaction;therapy options can become little more than another puzzle or game. It is much more difficult to escape the personal side of it as a chemotherapy infusion nurse. You see the face of anxiety as the session begins and catch the grimace when the needle is poked. Nausea and a variety of other reactions may be just around the corner. Sometimes the doctor may see these things, but not nearly as often as the infusion nurse.

I have never asked Seong-Hee why she left us for a while to work on the palliative/supportive care unit of the hospital. Maybe I have hit on some of the reasons in the previous paragraph. But I do know that the therapies in this setting are more directed toward helping the patient feel better in the more immediate sense, and maybe Seong-Hee felt that she needed to try it for a while. But in a few months, she was back with us, performing again in the arena that she knows so well.

Medical oncologists can also question their vocation and mission. I have had a love/hate relationship with clinical medicine since I walked on the ward in the third year of medical school, liking the intellectual challenge and the opportunity to help others, but frequently overwhelmed by the responsibility. In those worst days I am inspired by Seong-Hee and other chemotherapy infusion nurses here to keep “fighting the fight’’ as an oncologist in my current practice settings (Southwest Cancer Center in Lubbock, and a once a month a visit to Childress Regional Medical Center).

On a personal note, I do know that she is married and has three musically talented children, one of whom performed on the piano when National Public Radio’s “From the Top” came to town. Another currently plays with the Lubbock Symphony Orchestra. For so many reasons, I nominate Seong-Hee Cheon for this award.
Be the first to discuss this article on CURE's forum. >>
Talk about this article with other patients, caregivers, and advocates in the General Discussions CURE discussion group.