"I wanted to go do it the best I could, considering all the physical limitations. I just wanted to start, and I wanted to finish the Boston Marathon. The notion of time was not in the equation."
— JEFF GOAD, multiple myeloma survivor
BY Brielle Urciuoli
PUBLISHED July 25, 2017 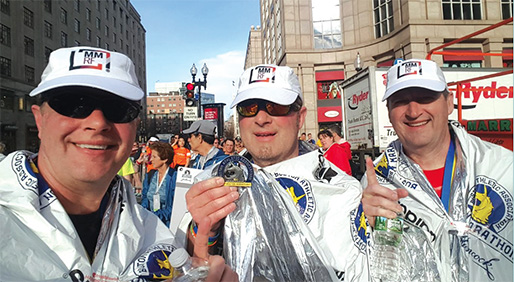 ‘Dream Come True’: Multiple myeloma survivor Jeff Goad (middle) and brothers, David and Brad, ran the Boston Marathon to raise money and awareness. - TOP: GLOWONCONCEPT / FOTOLIA; GOAD BROTHERS: COURTESY JEFF GOAD
An athlete and avid runner, it was hard to ever find Jeffrey Goad, a resident of Chicago, sitting still — even after he was diagnosed with multiple myeloma in the spring of 2010, just one week before his 50th birthday. After his first stem cell transplant, Goad was trying to get up and move as soon and as much as possible. “I remember taking my IV pole and taking laps around the hospital floor. I’d try to do at least 10 laps a day,” he said in an interview with Heal®. Those laps turned into fighting insurmountable fatigue to climb the stairs to his second-floor condo, to take a walk around the block, to get through a one-mile walk, until Goad was finally able to build back up to doing what he loves — running marathons.

“The things that jumped immediately into my mind was ‘What’s the quickest way I can get back to feeling normal?’ It was my marathon mentality of ‘I’m starting here today, but I can’t just go run that 26.2 miles tomorrow,’” Goad said. “I need to work into that kind of physical and mental mindset.”

Goad had two stem cell transplants and was deemed to be in remission in March 2011. That fall, he ran the Chicago Marathon with his brothers Brad and David.

“I didn’t think I’d ever run again, let alone do another marathon,” he admits. “It was like getting to relive my first marathon all over again.”

Back in his competitive racing days, Goad constantly pushed his limits in events like these, trying to beat his previous times and qualify for bigger and better races. He remembers a time when he was just seconds away from qualifying for the Boston Marathon. Now, he was able to focus on putting one foot in front of the other and finish the Chicago Marathon — which he did. In 2012, he ran the marathon again, following that up with the New York Marathon in 2013 and the Monterey Half Marathon a year later. In January 2016, he took a break from running to climb Mount Kilimanjaro with the Moving Mountains for Multiple Myeloma team benefitting the Multiple Myeloma Research Foundation (MMRF).

When Goad received his diagnosis, he was told that the average life expectancy for a patient with multiple myeloma was three to five years, a sobering statistic that he said was, “like taking a two-by-four to the head.”

“I didn’t believe that that was ever going to be my path,” he said. “I was going to do what I needed to do and be OK.” Goad’s bout with cancer was different than many others’, so much so that his oncologist was first taken aback when he told her that he recently went on a long walk or run. “I remember my doctor looked at me and said, ‘You what?!’” he recalled. “She knew I was not going to be the standard patient.”

While he may be atypical compared with other patients living with multiple myeloma, Goad was still able to connect with them and their families, especially those newly diagnosed. He would offer words of wisdom to the survivors, while his wife, Ramona, often spoke to the spouses and loved ones to offer guidance on the journey they had ahead of them.

“I find it extremely gratifying that I can be a guide for them and help mentor them through the process,” he said, mentioning that he never thought he would become such a large inspiration to the cancer community. “Complete strangers have been impacted by the things I’ve done in ways I could have never imagined. That was the most powerful part of the journey for me. I didn’t expect that, but I fully accept it and now feel that responsibility.”

One piece of advice he offers to others with multiple myeloma is to take charge of as much of your life as possible, because with a disease like multiple myeloma, it is easy to feel like you have lost control of your world between treatments and doctors’ appointments. One thing that Goad is adamant about is being referred to as a myeloma “survivor,” not “patient.” “As a myeloma survivor, that’s the right feel and the right tenor for me. It’s somebody’s doing something to you versus you having control,” he said. “It’s so amazing how having some control over your life helps your vantage point. You’re not misbehaving. Guess what? You’ve got choices.”

Last October, Goad was notified that his application to run on a charity team — the MMRF — was accepted. After decades of dreaming about it, he was finally going to run the Boston Marathon in April 2017.

“I knew how rare and highly coveted the charity bits were,” he said. “It was a dream come true because as a younger guy, I flirted with qualifying and just missed it by a minute or two.”

In November, however, he found out that his multiple myeloma had relapsed and he would need more treatment. That did not stop him from running.

“Training for a marathon — piece of cake. Because it’s such a piece of cake, why not make it more challenging?” Goad laughed. “I had a little extra training program, and it’s called chemo cross-training.”

Throughout last winter, he would receive chemotherapy injections on Monday. By Wednesday, he would be doing speed work with the local Chicago Adidas running club. Saturday meetings were for long-distance runs.

Goad wasn’t the oldest person in the group, but he undoubtedly was the slowest. And he was OK with that — for both training and the race.

“I wanted to go do it the best I could, considering all the physical limitations,” he said. “I just wanted to start, and I wanted to finish the Boston Marathon. The notion of time was not in the equation.”

Running the Race of a Lifetime

On race day, Goad admits he was nervous about finishing, especially since his longest run during training had only been about 15 miles. But he was even more focused on enjoying the day with his MMRF team, including his brothers.

“I turned it into enjoying the experience, the community, the sights, the smell and the sounds that are associated with these races. Not just the end. I didn’t want to be so overly focused that I missed all those things around me,” he said, noting that running as a part of the MMRF team, raising money and awareness for multiple myeloma, added extra meaning to the day.

In the past seven years, Goad’s team — himself, his wife and his brothers — has raised nearly $120,000 for the MMRF. And he won’t stop there. In 2018, he is planning to climb Mount Everest with the Moving Mountains for Multiple Myeloma team as he continues to think of more ways to be active and raise money and awareness.

“This is what we love to do. It [is] the most natural thing that we could do,” he said. “It does become ‘What’s the next adventure?’ People do expect adventure out of us now.”
Be the first to discuss this article on CURE's forum. >>
Talk about this article with other patients, caregivers, and advocates in the General Discussions CURE discussion group.