Survivors find that physical activity and sound nutrition lower health risks and boost well-being.
BY Robert Stern
PUBLISHED May 10, 2019
Even before Chris Irwin learned that a painless lump on his neck was stage 4 head and neck cancer he worked to stay in good shape. He exercised almost daily and paid reasonable, though not obsessive, attention to nutrition.

Since 2012, when Irwin faced an intense six-month regimen of almost daily radiation and weekly chemotherapy that wiped out his cancer, working out has taken on even more importance. Now 52, Irwin performs a range of physical activities, including weight training and swimming.

“The day after I had my feeding tube inserted, I went and ran five miles because I was determined to not let it stop me,” he says. “When my wife at the time saw me running, she cried because she couldn’t believe how strong I was trying to be.”

Irwin relied on the feeding tube for about three months because swallowing became unbearably painful, he says. Since then, his dietary choices have become even more deliberate. He now shuns fast food; packs his diet with berries, almonds, walnuts, garlic and honey; and opts for fish and chicken over red meat.

Irwin is one of an estimated 16.9 million cancer survivors living in the United States, according to the National Cancer Institute. That population is projected to increase almost 30 percent to 21.7 million over the next decade.

Patients with cancer and survivors generally can enhance their well-being and lower health risks by making the twin pillars of a nutritious diet and regular exercise part of their lifestyle, experts say.

“One is just as important as the other,” says Lidia Schapira, M.D., director of the cancer survivorship program at the Stanford Cancer Institute and an associate professor of medicine at the Stanford University Medical School. “The big picture is that, for people living with cancer (and) for cancer survivors, exercise and nutrition really matter.”

Eating foods rich in nutrients, such as protein, carbohydrates, vitamins and minerals, along with drinking plenty of water, can help people maintain a healthy weight, increase energy and strength, heal faster and feel better overall.

Physical activity has benefits, too. It improves heart health, boosts muscle strength and endurance, and reduces anxiety and fatigue, according to the American Society of Clinical Oncology’s patient website, Cancer.Net, for which Schapira serves as editor-in-chief.

Patients who exercised after any cancer diagnosis had a lower relative risk of cancer mortality and recurrence compared with those who exercised less or not at all, according to the results of a 2017 study in Epidemiologic Reviews. The findings also showed that patients who stayed or became more physically active were likely to face fewer or less severe side effects from treatment than less active or inactive patients.

For Irwin, the value of exercising after cancer made sense instinctively. “Our bodies were not made to be sedentary. They were made to move,” says Irwin, who lives in California, where he works as director of operations for a security company. His varied regimen also includes squat thrusts, a Philippine martial art and — his most recent addition — yoga. He works out 25 to 90 minutes daily, five or six times a week. 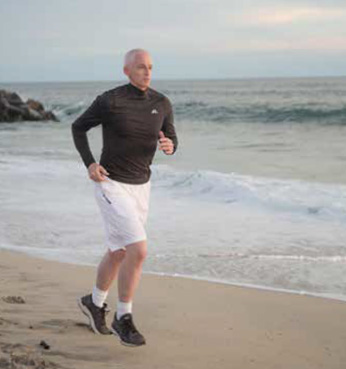 Survivors should aim for 150 minutes of exercise each week, including strength training on at least two days, according to the American Cancer Society, which also recommends that survivors talk with their care team about a suitable exercise plan.

For survivors who feel a lack of stamina and strength after a prolonged period of inactivity, the American Society of Clinical Oncology recommends a daily 10-minute walk to kick-start the exercise habit. People also can turn everyday activities and chores into exercise opportunities, such as taking stairs whenever possible, running errands on foot or
parking farther from an entrance.

It may help to consult a certified health and fitness professional. The American College of Sports Medicine is a good resource for finding one certified as a cancer exercise trainer.

Ideally, an exercise program for survivors should hit on four broad areas: strength, cardiovascular health, range of motion and flexibility and balance, says Andrea Leonard, a certified personal trainer and founder and president of the Portland, Oregon-based Cancer Exercise Training Institute. “The variables are how much, how often and how intense,” she says. Leonard, 53, is a 35-year thyroid cancer survivor who has had 23 close relatives receive cancer diagnoses, including both parents.

She recommends exercises that improve balance to help survivors address neuropathy-related problems. A basic balance exercise starts off with both feet on the ground and hands on a counter or the back of a sturdy chair for support, then raising one foot off the floor at a time. If that is easy, try standing with one foot raised without holding on to the chair or counter, she says. For a more challenging balance exercise, move one leg to the front, side and back while balancing on the other leg.

Cardiovascular workouts can strengthen the heart and lungs, which may be weakened by chemotherapy and radiation. These include walking, climbing stairs, dancing and riding a stationary bike, as well as swimming if the person’s immune system is not compromised and there is no skin irritation from radiation, Leonard says. Strength training can bolster bones made fragile by treatment-related osteoporosis.

“Shoot to exercise until you feel mild discomfort but never pain. Pain is not a good sign,” Leonard says. However, she adds, there is no cookie-cutter plan for exercising after a diagnosis, because each person has a unique mix of health history, type and stage of cancer, fitness level and response to treatment.

A plant-based — but not necessarily vegetarian — diet can help survivors rebuild strength after treatment and reduce their risk of other chronic health problems, such as obesity, heart disease and diabetes, Schapira says.

“Choose a diet rich in vegetables, whole grains, fruits and beans,” says Kate Allen, RDN, LDN, an outpatient clinical dietitian at Moffitt Cancer Center in Tampa, Florida. “Choose the whole forms of foods as much as possible. Aim for variety, bright color (and) strong flavors on your plate for the benefits of phytonutrients, which are naturally occurring plant chemicals that have possible anti-cancer benefits.”

Limit red meat, including beef, pork and lamb, to 18 ounces or less a week, and avoid regular consumption of processed meat, such as bacon and hot dogs, recommends the American Institute for Cancer Research. The latest research findings show that exceeding 18 ounces of red meat weekly increases the risk of colorectal cancers, according to the institute. Likewise, stomach and colorectal cancer risks rise with regularly eating any amount of processed meat, which is preserved by smoking, salting, curing or adding other preservatives.

Avoid processed foods with added salt or foods preserved with salt, says Allen, whose advice reflects the institute’s guidelines. She also advises survivors to steer clear of foods that are high in empty calories and lead to weight gain. These can include sugary beverages and sugar-added foods, refined starchy foods and fast food.

A tailored diet will also ease treatment-related side effects. For example, diarrhea can be mitigated with a low-fiber diet, Allen says, and small, frequent meals might be easier to handle for patients who feel full after eating a small amount of food or have nausea and fatigue.

Paying new or renewed attention to diet and exercise can help survivors regain the sense of control that a cancer diagnosis often steals, Schapira says. That benefit is an easily overlooked but important aspect of improving physical and mental health.

Kate Beland can attest to that — exercise plays a major role in her life as a cancer survivor. “It’s a sense of control in a very uncontrollable situation, and for me, that was huge,” says Beland, a runner, skier and writer. 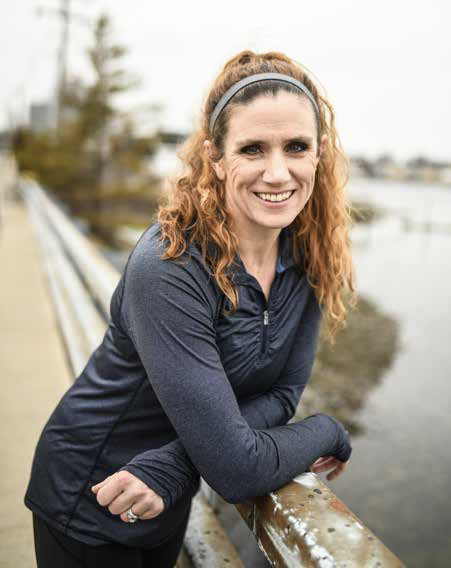 The 44-year-old married mother of three received a diagnosis of stage 3 melanoma of her hip in April 2015, one week after she ran the Boston Marathon for her first and only time. Cancer also developed in two lymph nodes in her groin; two successful surgeries removed it all. Beland, who lives in Portsmouth, New Hampshire, and once managed a health club, says that resuming physical activity fairly early in her recovery was slow going at first but helped control the swelling she experienced as a side effect of her lymphadenectomy, a surgical procedure to remove lymph nodes.

Because of her lymphedema, she is more conscientious about cutting back on breads and processed starches, staying hydrated and having a mix of plant-based foods and protein in her meals. Beland runs or strength trains five or six days a week. On winter weekends, she skis with her family. She spends a little more time stretching and clearing her head than she did before her surgery. “Physically, I needed to be active and to do everything just to get my mobility back and heal my body,” Beland says. “But mentally, it would have been a lot harder. Running was the tool I needed to cope. It was like going to church for me.”

Of course, not every survivor is a runner. Carlene Igras’ go-to exercise is a brisk walk. A retired middle-school teacher, Igras had a hysterectomy and six chemotherapy rounds over four months in 2017 after learning that March that she had stage 1A ovarian cancer. “I was always a really healthy person, so this kind of knocked me back,” says Igras, 63. To rebound, she makes a point of going for daily 30-minute power walks, even in the tropical heat of summer in her adopted hometown of Vero Beach, Florida.

She says walking even during treatment helped minimize the fatigue that chemotherapy brought on. Recently, she started doing yoga at home, aiming for three sessions a week. She cut out fast food, junk food and fried and greasy food. “Your whole mindset changes when this kind of thing happens to you,” Igras says. “It’s like, what can I do to try to keep my body healthy?” 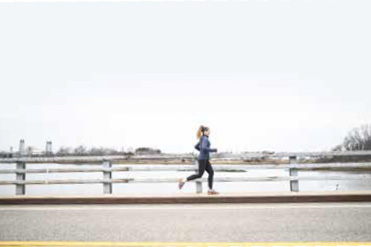 KATE BELAND combines plant-based foods and protein in her meals. She tries to exercise at least five days a week.
Be the first to discuss this article on CURE's forum. >>
Talk about this article with other patients, caregivers, and advocates in the Diet and Exercise CURE discussion group.