Coincidences and Cancer: Do You Believe? 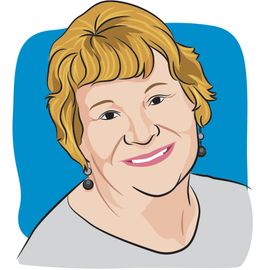 Jane is a ten-year survivor of a very rare form of cancer Myelodysplastic Syndrome. She has enjoyed several exciting careers including a librarian, counselor, teacher, and writer. She loves to write about surviving cancer, overcoming hearing loss, and her hearing ear service dog, Sita.

Cancer changed my life for the worse, but it also opened me to many new experiences I would never have had without it.

I believe in coincidences, and think we meet certain people for a reason. Author Flavia Weedn said the famous quote, “Some people come into our lives and quickly go. Some stay for awhile and leave footprints on our hearts. And we are never, ever the same.”

I think all of us can remember the relative, the friend, the teacher, the person who left an imprint on our hearts and were there for a reason.

I can think of so many times in my life that something unexplained happened, when later I realized there was a reason behind it. I remember being young and just out of school. I was struggling financially, living in an ice-cold apartment with no heat, sick with bronchitis and worried about money. My old car needed repairs and I had no savings, no investments, just a small check coming in. Suddenly, an insurance reimbursement check arrived in the mail and I felt like I had hit the lottery. I have had several friends tell me when they received an unexpected sum of money when they were down and out. It makes a believer out of me.

I prepared for several years and received a rehabilitation degree intending to work as a counselor with deaf clients. Instead, when I applied for a state position, they had a job opening working with blind clients. After I accepted the job, I found out the similarity of losing one’s sight to one’s hearing because they are both sensory losses. Much to my surprise, I ended up doing my dissertation for my doctorate on this subject. Later, I attended an out-of-state week-long conference on people who were both deaf and blind and met the most incredible people ever. I loved working with a small caseload of blind and deaf clients. Later, when I taught Deaf Culture and Interpreting classes for the deaf, I used this information with the students. This first job seemed to be the gift that kept on giving.

I recently was asked to give a program for a group of youth coordinators for several churches in the area. I decided to do it on coincidences. When I began to research the topic, a quote hit me in the face. Albert Einstein was the brilliant man who said, “Coincidence is God’s way of remaining anonymous.” WOW!

Do I believe in predestination and think this is the reason I got cancer? No — I do not think people are being targeted for awful events like disease, accidents, storms and horrible things happening. I think I had a single cell that mutated and went wrong. However, I found out that after I got cancer, things started to fall into place.

First, I met my oncologist, who has made a huge impact on my life and left many footprints. She is the most caring and compassionate person I know. She loves her job and says it is not work to her. She tells me that she relies on a spiritual being to get her through the difficult part of her life and her job. She is the person who has encouraged me to write about the journey with cancer and calls it my “golden pen.” We both feel that we were meant to meet each other.

With her encouragement, I started to write for CURE and have met incredible people from all over the country taking this cancer journey. I have received letters, Facebook messages and emails. Through CURE, I have met some wonderful people who specialize in my type of cancer in a group named Anaplastic Anemia MDS International Foundation. I lost a great deal of my hearing and was published in a national magazine called “Hearing Loss” after I wrote an article about the dangers of these drugs. Later, I was asked to do a program at the national Hearing Loss Association of America convention in Salt Lake City. Now. I continue to write for CURE and make other contacts.

Cancer changed my life for the worse, but it also opened me to many new experiences I would never have had without it. It seems like all the pieces of my shattered life after I was diagnosed have fallen into place and made a new picture.

Yes, I believe in coincidences and I think they happen to every one of us. Think over some of the events in your life and in your cancer journey and see if you agree. Coincidences, indeed, are God’s way to stay anonymous, and we have to look for it.