Andrew Jones, Texas Longhorn Basketball star and cancer survivor has announced that he will be utilizing his NIL (name, image and likeness) earnings to raise money for cancer research.

AUSTIN, TX (January 28, 2022) — Andrew Jones, Texas Longhorn Basketball star and cancer survivor has announced that he will be utilizing his NIL (name, image and likeness) earnings to raise money for cancer research. Partnering with the V Foundation for Cancer Research, an institution founded by ESPN and legendary basketball coach Jim Valvano, Jones is pledging 10 cents of every dollar he receives from NIL activities to the foundation.

The world of college sports has experienced a significant shift this year following the ruling from The National Collegiate Athletic Association (NCAA) that now allows athletes to monetize their NIL.The announcement from Jones pledging 10% of his earnings on NIL towards a cause close to his heart sets a precedent for athletes to use a portion of these profits to help make a difference in their communities.

“The money donated to the V Foundation played a major part not only in my ability to receive proper treatment but maintain confidence in both my recovery and eventual return to basketball,” said Texas Longhorn Andrew Jones. “To be able to share my story on how this foundation has impacted my life while paying that forward to future families impacted by cancer is an honor. ”

Following a promising career start as a freshman, Texas Athletics was prompted to send Jones for tests following fatigue at the start of his sophomore season. At the start of the new year, it was announced that Jones was diagnosed with leukemia. Texas Athletics and the larger sports community rallied behind him and Jones was honored by several schools, receiving more than $130,000 in donations for his medical expenses.

After receiving treatment at the University of Texas MD Anderson Cancer Center, Jones spent the second half of his sophomore season in recovery and was granted medical redshirts for both the 2017–18 and 2018–19 seasons. Jones made his redshirt sophomore season debut in November 2019 and by the end of the season was named All-Big 12 honorable mention. After graduating in May 2021 with a degree in Physical Culture & Sports, Jones has returned for his sixth season with the UT basketball program and is continuing his studies in personal branding.

“We are thrilled to have the support of Andrew in our mission to fund game-changing cancer research,” said Jeremy Jones, Director of Brand & Influencer Partnerships for the V Foundation. “He will be a pioneer and role model for the future of collegiate NIL nonprofit partnerships.”

The V Foundation for Cancer Research was founded in 1993 by ESPN and the late Jim Valvano, legendary North Carolina State University basketball coach and ESPN commentator. The V Foundation has funded nearly $290 million in game-changing cancer research grants nationwide through a competitive process strictly supervised by a world-class Scientific Advisory Committee. Because the V Foundation has an endowment to cover administrative expenses, 100% of direct donations is awarded to cancer research and programs. The V team is committed to accelerating Victory Over Cancer®. To learn more, visit v.org.

Jones is encouraging everyone to join him in donating to the V Foundation. To learn more and to donate towards Andrew’s goal, visit v.org/AJ1

About the V Foundation: The V Foundation for Cancer Research was founded by ESPN and legendary basketball coach Jim Valvano with one goal in mind: to achieve Victory Over Cancer®. 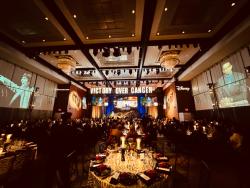