Peter Voorhees, M.D., discusses the advancements in multiple myeloma treatment, as well as where he hopes the field will go in coming years.
BY Gina Columbus
PUBLISHED August 14, 2017 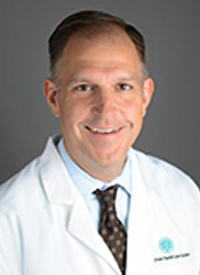 “The future is definitely brighter for patients with multiple myeloma,” said Voorhees. “The high-risk group of patients perhaps have not had the same magnitude of benefit as the standard-risk patients, and we need to continue to work harder to benefit those patients in particular. But across the board, whether you have standard-risk or high-risk [disease], the treatment paradigms are getting better. There are a lot of exciting agents in the pipeline and they will only get better as we move forward.”

Voorhees, who specializes in hematology and medical oncology at Levine Cancer Institute, Carolinas HealthCare System and UNC Chapel Hill, discussed treatments for both newly diagnosed and relapsed patients with multiple myeloma during an interview with CURE.

What treatments are available for newly diagnosed patients with multiple myeloma?

I had the opportunity to talk about the treatment of newly diagnosed patients who are not necessarily eligible for autologous stem cell transplantation. There are three things in particular that are worth commenting on. First off, there has been a larger body of literature that has come forth supporting the paradigm of continuous treatment until disease progression. The FIRST trial is a good example of that. This was a randomized phase 3 study that has been published for a few years now, which compared continuous Revlimid (lenalidomide)/dexamethasone therapy versus 18 months of treatment. There was a clear improvement in PFS with [the continuous] approach.

I also talked about an important retrospective analysis of three phase 3 trials, which looked at different treatment strategies looking at continuous versus fixed-duration therapy and, in that particular analysis, they found that not only the first progression-free survival (PFS) improved with continuous treatment paradigms, but time to second progression, or PFS2 as we call it, was also prolonged. There was a survival advantage seen in that particular analysis, as well. Until treatment paradigms change and the therapy gets better, continuous treatment is the most advantageous, as long as patients are tolerating it.

The reason that this study is important is that it strongly suggests that this particular triplet is a new standard of care for transplant-ineligible patients who would otherwise tolerate that type of approach. All of the patients on the Revlimid/dexamethasone arm had access to Velcade in subsequent lines of therapy, so it leads to this important issue of sequencing. Can you get away with a doublet followed by a Velcade-based regimen?
Revlimid/dexamethasone followed by a Velcade-based regimen? Or, should you use all three [drugs] together? This study suggests that you should use all three together in those situations where you think that the patient can tolerate it.

Lastly, a lot of the breakthroughs that have occurred in patients with relapsed myeloma with one to three prior lines of therapy is that a lot of those Revlimid/dexamethasone-based backbones that have recently received regulatory authority approvals are all being tested in the frontline setting—now also in the transplant-ineligible situation, so we have Revlimid/dexamethasone with or without Darzalex (daratumumab).
There is also Revlimid/dexamethasone with or without Empliciti (elotuzumab), or with or without Ninlaro (ixazomib). We have a number of different studies that are out there now. Most, if not all of those, are going to be positive trials, so there are going to be even more treatment options for these patients moving forward.

Which of these trials do you believe would have the greatest impact on the field?

It is likely that the addition of Darzalex to the Revlimid/dexamethasone backbone will likely lead to a very significant magnitude of benefit with regards to PFS, and hopefully OS, as well. We will see a pretty respectable overall response rate (ORR) in that group of patients; the proportion of patients who will achieve a very good partial response (VGPR) or better is going to be incredibly high.

What kind of treatment-related toxicities should patients and their health care providers look out for?

One of the concerns raised by the SWOG study that I mentioned earlier is the fact that the addition of Velcade to the Revlimid/dexamethasone doublet significantly increases toxicity; peripheral neuropathy is a significant concern in that group of patients. First off, Velcade was given intravenously in the SWOG study because of patients enrolled prior to the regulatory approval of subcutaneous Velcade.

The use of subcutaneous Velcade will help ameliorate the risk of neuropathy. A lot of us have started moving toward a modified RVd [Revlimid, Velcade, and dexamethasone]–type platform for older patients who may be more prone to side effects, including peripheral neuropathy.

For those patients 75 years of age or older, or for patients who have brittle diabetes or congestive heart failure, I would lean toward a 20-mg dose of dexamethasone as opposed to a 40-mg dose of dexamethasone. This way, you can adjust the schedule of administration, and the mode of administration, with regard to Velcade. The actual dose and all of those things are important.

Toxicity is important because, again, this continuous treatment method appears to be advantageous, at least with what we have available to treat patients now. We need to minimize side effects if we are going to actually treat patients continuously.

What therapies have become available for patients with relapsed/refractory disease?

There have been a large number of regulatory approvals of therapies for patients who have had one to three prior lines of therapy. There are 4 different Revlimid/dexamethasone-based triplets that are now FDA approved: with Ninlaro, Empliciti, Kyprolis (carfilzomib), and Darzalex.

There was Kyprolis/dexamethasone which outperformed Velcade/dexamethasone in the ENDEAVOR trial. Then, we had the PANORAMA-1 results of Velcade, dexamethasone, and Farydak (panobinostat).

There are a large number of patients in the United States who are going to be treated with Revlimid-based therapies in the frontline setting until disease progression. If a patient has disease that is progressing in the face of Revlimid therapy, giving them a Revlimid/dexamethasone-based platform on their first relapse may not be as relevant. In this case, a proteasome inhibitor–based approach would make more sense, such as Kyprolis/dexamethasone and Velcade/dexamethasone with Darzalex.

Velcade/dexamethasone with Farydak has shown improvement with regard to PFS, but has fairly significant side effect issues, such as severe fatigue, gastrointestinal issues, weight loss, loss of appetite, nausea, diarrhea and significant cytopenias, that make it challenging. That particular regimen has not been used very much in this space.
For those patients who do receive a limited duration of therapy, go off treatment, and then, subsequently, relapse, those are the perfect patients for a Revlimid/dexamethasone-based platform. Then again, as we eluded to before, the Revlimid/dexamethasone with Darzalex regimen looks quite good in that setting.
Be the first to discuss this article on CURE's forum. >>
Talk about this article with other patients, caregivers, and advocates in the Myeloma CURE discussion group.