The FDA has approved a novel breast-specific stereotactic body radiotherapy (SBRT) device known as GammaPod as a treatment for patients with breast cancer, based on findings from a 17-patient study.
BY Silas Inman
PUBLISHED December 22, 2017 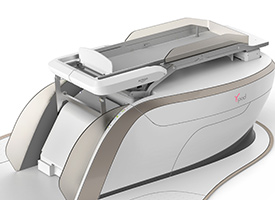 The GammaPod
The FDA has approved a novel breast-specific stereotactic body radiotherapy (SBRT) device known as GammaPod as a treatment for patients with breast cancer, based on findings from a 17-patient study.

In the small clinical trial, GammaPod was effectively used to deliver a single "boost" radiation dose of 8 Gy directly to the tumor, while only eliciting grade 1 adverse events (AEs). The system uses a vacuum-assisted breast cup guided by a CT simulator with 1 mm slice thickness to immobilize the breast, which ensures the accurate delivery of radiation to the tumor.

The pivotal trial enrolled women aged 60 and older with stage 1 or 2 invasive breast cancer following breast conserving surgery with planned tangential radiation therapy (RT). Following the 8 Gy boost, patients were treated with whole breast irradiation with either a hypofractionated dose of 40.05 Gy in 15 fractions or in 25 conventional fractions.

Tumor bed volume ranged from 2.86 cc to 20.38cc and the planned target volume (PTV) with 10 mm expansion from the gross target volume (GTV) ranged from 21.69 cc to 89.56 cc. The time needed from CT imaging to completion of treatment was approximately one hour, with the actual treatment time being 17 to 29 minutes.

Of the planned 17 patients, signed consent forms were available for 13 patients at the time of a presentation at the 36th ESTRO Congress. Of the 13 patients, 12 successfully completed the treatment protocol. Ten patients received an accurate boost dose of radiation using the system, which met the criteria for the primary endpoint which dictated an acceptable dose for 6 of 8 patients or 13 of 17. One patient with a deep seeded tumor bed received a larger-than-prescribed dose and another had inadequate coverage of the PTV.

Following the boost treatment, one patient developed superficial skin blistering prior to the start of whole breast irradiation. The blistering was seen around a silicone filler. Researchers noted that the blisters were not associated with pain and resolved spontaneously without intervention. The overall AEs for the boost and whole breast irradiation portions of the study were fatigue (seven patients), dermatitis (six patients), hyperpigmentation (two patients), breast pain (two patients) and limb edema (one patient).

A geometric reproducibility study, also presented at ESTRO, looked at 24 patients with surgical clips in their breast using a CT scan before placement of the GammaPod system and a second 30 minutes after to ensure placement. These findings confirmed the systems' ability to immobilize the breast. The reproducibility for 45 available clips in 11 patients was 1.13 mm (± 0.87).

Studies looking at the GammaPod system were conducted at the University of Maryland, which was where the pivotal study was conducted. The trial was cleared and began enrolling patients in 2015.
Be the first to discuss this article on CURE's forum. >>
Talk about this article with other patients, caregivers, and advocates in the Breast Cancer CURE discussion group.