In recent years, the number of available gynecologic cancer clinical trials has gone down. The Foundation for Women's Cancer educates women about the trials that are available, and encourages them speak up publicly about the need for more.
BY Katie Kosko
PUBLISHED December 29, 2017 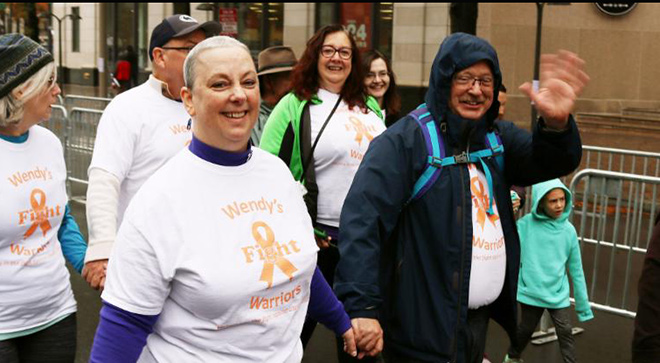 Wendy Ericsson and her husband, George
When Wendy Ericsson learned she had uterine cancer in December 2012 she went looking for information, but didn't find much out there about her disease.

Through her doctor, she was directed to the Foundation for Women's Cancer (FWC).

“There’s a lot of information out there for ovarian and cervical cancer. But for uterine cancer, there is virtually nothing,” said Ericsson. “The FWC is the only national organization that provides help, education and research into all women’s below the belt cancers.”

Initially diagnosed with irritable bowel syndrome – a result of her tumor being wrapped around her colon - an annual visit to her gynecologist revealed a much dire diagnosis: stage 4b uterine cancer.

Ericsson had surgery, followed by chemotherapy. She was cancer-free for three years. In March 2016, the cancer came back, and then back again in early 2017. She obtained a second opinion, which resulted in a diagnosis of fallopian tube cancer. Since this is treated the same way as ovarian cancer, it opened more options for treatment. That’s when Ericsson considered participating in a clinical trial, which consisted of more chemotherapy, since she wasn’t selected to receive the experimental drug, but at a different dosage and frequency.

She spent most of her summer in and out of chemotherapy treatments, until she experienced some blurry vision, a side effect that her oncologist had never seen with this treatment before. She ended treatment after 15 weeks and regained her visual acuity.

Although she had to end her participation in a clinical trial, Ericsson understands the important role they play in finding out which treatments work, how well they work and what dosage works best.

Putting the Pieces Back Together

In recent years, though, there has been a reduction in the number of women with gynecologic cancers, such as ovarian, cervical, vulvar, vaginal and endometrial cancers, who are enrolled in clinical trials. In fact, phase 3 trial patient enrollment has seen a 90 percent reduction, according to the FWC. The number of gynecologic cancer clinical trials has also seen a decline.

Clinical trials are the final, critical step in developing new therapies that provide women with cutting-edge care, with the focus of improving survival. For example, a study published in 2007 found that adding chemotherapy to radiation therapy when treating cervical cancer significantly improved survival, which is now the standard of care, said Laurel Rice, M.D., of UW School of Medicine and Public Health in Madison, Wisconsin, and president of the Society of Gynecologic Oncology.

Another example is a 2016 clinical trial that proved PARP inhibitors can improve progression-free survival (PFS) in women with ovarian cancer, even if certain genetic mutations are not present. “Up until now, it was thought that this class of drugs could only be used in a small subset of patients,” she added. “This large, multicenter clinical trial established that regardless of genetic makeup, PARP inhibitors can improve PFS in women with ovarian cancer.”

The decline in the availability of clinical trials is attributed to many factors, including a limited National Institutes of Health budget, restructuring of NCI-sponsored cooperative groups and a shifting emphasis on smaller biomarker-driven studies, according to leading experts in the field.

“Through a commitment on the part of many individuals involved in gynecologic cancer, the NCI is responding to the crisis and has already conducted clinical trial planning meetings to identify areas of need,” said Mutch. “Dr. Elise Kohn at the NCI is really working hard to improve the availability of clinical trials, specifically those focused on biomarkers.”

Mutch explained that the larger clinical trials will now be taken on through the Gynecologic Oncology Group (GOG) Foundation, which is headed by Larry Copeland, M.D. Many of these trials will be funded by the pharmaceutical industry with a strong commitment to drug development.

Mutch, Rice and Ericsson agree that one of the best ways to solve the clinical trial crisis is through education and advocacy.

“Clinical trials are one of the most important mechanisms to advance the field and establish new therapies that can cure, prevent or screen for cancers,” said Rice. “There is no other mechanism, besides clinical trials, to firmly establish the efficacy of new treatments, affording women improved survival from gynecologic cancers.”

To help spread the word, the FWC has lobbied patients to speak up to government leaders about the inadequate number of clinical trials available to them. The organization also is developing a website that will list all gynecologic oncology clinical trials with the GOG Foundation working toward supporting this effort.

“We’re going to access the molecular abnormalities that exist within a cancer and target those therapies,” said Mutch. “The hope would be that maybe 20 years down the pike we may not use standard treatments that we are using now.”

While there are misconceptions about clinical trials among the patient population, Ericsson advised patients to not let that stop them from joining one. “You’re not just helping yourself. You’re helping every other woman out there who has or may have this cancer in the future,” she said. “If anything is going to come out of my having cancer, how wonderful would it be that a cure or treatment came out of it?”

Ericsson found out that her cancer came back for a fourth time just before the new year. She will begin treatment with the new PARP inhibitor Zejula (niraparib), as she continues to raise money for research and spread awareness around clinical trials.

“For me, it’s a matter of life and death,” she said. “I need those clinical trials to find something that will cure me.”

Be the first to discuss this article on CURE's forum. >>
Talk about this article with other patients, caregivers, and advocates in the Uterine Cancer CURE discussion group.