According to the lead study investigator, work needs to be done to ensure financial toxicity is not a deterrent to clinical trial enrollment and that trial sponsors and payers should consider trial expense reimbursement.
BY Ryan McDonald
PUBLISHED July 17, 2020
Economic burden among patients with cancer who participate in early-phase clinical trials is often high and most out-of-pocket costs the patient experiences are non-medical expenses such as travel, according to data presented during the 2020 ASCO Virtual Scientific Program.

“Clinical trials have additional visits and costs compared to the standard of care,” Dr. Ryan W. Huey, an assistant professor in the department of gastrointestinal medical oncology at The University of Texas MD Anderson Cancer Center in Houston, said during a pre-recorded presentation of the data. “And while financial toxicity has been well described for patients with cancer, it is less well established for patients who enroll in clinical trials.”

To evaluate financial toxicity, which is the direct and indirect impact of health care costs that lead to significant financial burden, and out of-of-pocket costs for patients with cancer enrolled in early phase clinical trials, Huey and colleagues surveyed patients who were on a trial for more than a month. The goal, Huey said during the presentation, was to talk to patients who accurately understood what their monthly expenses were while on their respective trial.

The researchers collected data regarding patient demographics, including, but not limited to, patient and disease characteristics, as well as insurance status. 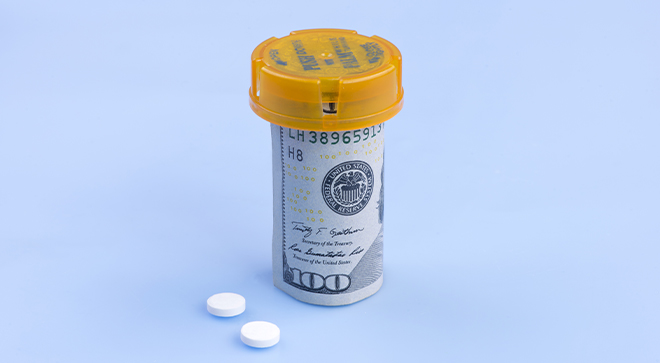 More than half of the trial participants surveyed were female (59%) and more than three-fourths (79%) were non-Hispanic white. Other characteristics patients were grouped by included yearly household income, type of insurance, employment status and length of time spent on current trial.

Forty percent of the patients were employed either full- or part-time, while 37% were retired and 15% were unemployed.

Thirty percent of the participants were either fully (6%) or partially (24%) reimbursed for their travel.

Out-of-pocket, patients spent a median of $1,075 a month on non-medical expenses. Expenses attributed to medical costs accounted for $475 out-of-pocket per month. The survey demonstrated that more than half (55%) of patients felt that their expenses attributed to medical costs were higher than expected. Sixty-four percent of patients also reported that they felt their non-medical expenses were higher than expected.

Factors associated with a worse financial burden included an annual household income of less than $60,000, participating on at least one previous phase 1 clinical trial and living more than 100 miles away from the clinical trial site.

Huey concluded his presentation noting that the economic burden patients participating on clinical trials experience is high, and that most of the costs are related to nonmedical expenses.

“Financial toxicity disproportionately affects patients with lower income and those who travel far to receive their care,” he said. “And costs are often higher than expected. Work needs to be done to ensure this financial toxicity is not a deterrent to enrollment. And sponsors and payers should consider the role of trial expense reimbursement.”
Be the first to discuss this article on CURE's forum. >>
Talk about this article with other patients, caregivers, and advocates in the General Financial Topics CURE discussion group.