Through music, Christian Hoff shares his message of hope for patients and survivors of cancer.
BY Brielle Urciuoli
PUBLISHED November 21, 2016 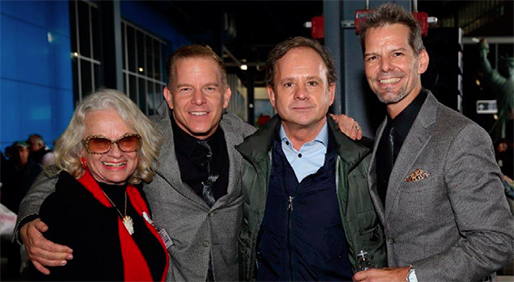 Sharon Lee Parker, Christian Hoff, Andre Goy, M.D. and J. Robert Spencer celebrate Life & Liberty, an annual celebration hosted by the John Theurer Cancer Center in Hackensack, New Jersey. - PHOTO BY JOHN THEURER CANCER CENTER AT HACKENSACK UMC
To many people across the globe, Christian Hoff is known as a singer with the Midtown Men, or the actor who flawlessly played Tommy DeVito in the original cast of the Broadway musical “Jersey Boys,” earning him both a Tony and a Grammy award. But to five-year-old “cancer warrior” Ella, the man behind the voice is simply known as “Dad.”

Ella has acute lymphoblastic leukemia (ALL). Her mother, Hoff’s wife, is a breast cancer survivor, and Hoff’s parents also had bouts with the disease.

Hoff attended Hackensack University Medical Center’s 2016 Life and Liberty event, not only to perform with the Midtown Men, but also to promote a cause that is so dear to his heart.

“The beauty of what I do for a living, which is to entertain, is that we can utilize those opportunities for good and to lighten and elevate an event or topic. It’s not always just about letting go and having a good time,” explains Hoff. “It can also be about hope and encouragement and bringing light to a heavy situation. I know how important that is for me, personally.”

Ella, Hoff’s youngest daughter, was diagnosed with ALL two years ago at age 3 and is now at the end of her treatment. She is responding well to her chemotherapy, though the family still encounters struggles. Just a few weeks ago, when getting ready for a day at preschool, the child’s hair began to come out in clumps again.

“We thought we were out of the woods and were going to coast to the finish line. All of a sudden, we turn the corner and see there’s another climb for her. She’s a girl going to preschool in pain. She’s going to be a girl who is bald in preschool. We don’t want that,” Hoff said.

But Hoff says his daughter handles adversity well and is still a normal kid. That, he says, gives him hope.

“She’s probably going to be cool with it. She was diagnosed at three, so all she’s known is this. We’re hoping it doesn’t affect her, but it does,” Hoff said. “And not every cancer patient is three years old. They’re adolescents and adults and moms and dads and uncles and grandparents — cancer is so hard for everybody.”

In addition to playing at events like Life and Liberty to spread awareness and raise funds for research, Hoff also sits on the board for the V Foundation for Cancer Research and says he’s optimistic about the many advances he’s seen in the medical and tech world.

“There are so many opportunities to give hope and to encourage people. That’s what I’m all about. I do it as an entertainer, I do it as a board member for the V Foundation, and I do it as a dad. It’s just what I do.”
Be the first to discuss this article on CURE's forum. >>
Talk about this article with other patients, caregivers, and advocates in the Breast Cancer CURE discussion group.