In both diagnosis and treatment of cancer, there is a growing role for radiation drugs that are injected, ingested or inserted.
BY Arlene Weintraub
PUBLISHED July 17, 2020
Barbara Davis was treated successfully for metastatic breast cancer in 2007, but when her disease recurred in her bones in 2017, her oncologist at The University of Texas MD Anderson Cancer Center in Houston looked beyond conventional treatments such as hormonal treatments or chemotherapy. He enrolled Davis in a trial of Xofigo (radium-223), an injectable form of radiation that targets cancer cells in bones.

To treat her hormone-driven disease, Davis received the agent once a month for six months, along with Xgeva (denosumab), a bone-strengthening drug that prevents fractures in patients with cancer. She also received a short course of the hormone therapy Faslodex (fulvestrant) and the targeted treatment Ibrance (palbociclib). Her cancer has been stable ever since, her bones remain strong and she takes no treatments aside from monthly Xgeva injections.

“I sometimes had bone pain that could get to be unbearable, but since I had the radium-223, my bone pain has been livable,” says Davis, 60, a certified public accountant in Cypress, Texas, spends her spare time mentoring other MD Anderson patients and being with her four children and four grandchildren. “I feel a lot better than I did before the trial. I’m very thankful. This put my cancer back in check.”

Xofigo is part of a growing class of drugs known as radiopharmaceuticals, which are radioactive drugs that can be used for diagnosing or treating cancer. Unlike external beam radiation, which is aimed at tumors from outside the body, radio- pharmaceuticals can be injected, taken as pills or inserted into a body cavity to precisely target cancer cells in ways that limit damage to healthy tissues. As oncology researchers identify more radioactive elements that can be used to target cancer and as they build their understanding of how these radioactive drugs work, the role of these medications in treating cancer is expanding.

“Targeted radiopharmaceuticals will become much more important for patient care in the next 10 to 15 years, and the National Cancer Institute (NCI) thinks it’s going to be transformative,” predicts Dr. Charles Kunos, a radiation oncologist and medical officer at the NCI’s Cancer Therapy Evaluation Program. NCI research aims at identifying more radiopharmaceuticals and finding new uses for those already on the market.

Xofigo was approved by the Food and Drug Administration (FDA) in 2013 to treat prostate cancer that has spread to the bones. It is drawn to areas that have a high turnover rate, with bone resorbed and replenished rapidly. Those areas typically involve cancer metastases. Once the drug reaches the tumors in bone, it induces double-stranded DNA breaks in prostate cancer cells, which eventually causes them to die. In a clinical trial leading to the approval, Xofigo produced a median overall survival rate of nearly 15 months versus 11 months for the standard of care.
Side effects can include gastrointestinal discomfort, swelling of the extremities and low blood counts.

Of about 15 FDA-approved radiopharmaceuticals for cancer, most are used for diagnostic imaging. In addition to Xofigo, four radiopharmaceuticals are approved as treatments: Hicon (sodium iodide I-131) for thyroid cancer, Azedra (iobenguane iodine-131) for adrenal gland tumors, Lutathera (lutetium-177) for neuroendocrine tumors of the digestive tract and Zevalin (yttrium-90) for non-Hodgkin lymphoma. In addition, Quadramet (samarium-153 lexidronam) is approved as a palliative treatment for pain associ- ated with metastatic bone lesions in breast, prostate and other cancers.

Therapeutic radiopharmaceuticals are typically administered by radiation oncologists or nuclear medicine physicians. Depending on the therapy and the dose, these health care professionals may wear special protective gowns and administer the treatments in radiation-safe rooms. Hicon is given orally. Patients may be instructed to limit close contact with friends and family members for several days to avoid exposing them to radioactivity from the drugs.

Although Xofigo is approved to treat only symptomatic prostate cancer, some oncology researchers believe it holds promise in treating other cancers that have spread to the bone, including breast cancer. In the clinical trial that included Davis, 54% of participants saw their bone metastases respond according to what was visible via positron emission tomography or PET scan, and the median time before the cancer in their bones progressed was 16 months.

The radiopharmaceutical “is really well-tolerated,” says Dr. Naoto Ueno, professor of medicine at MD Anderson and the lead investigator of the breast cancer trial. Some patients reported mild bone pain when the radium was injected and a bit of fatigue, but there were no serious side effects. That is encouraging Ueno and other researchers to design more trials of Xofigo, some of which are investigating whether the radiopharmaceutical will boost patients’ responses to traditional cancer treatments like chemotherapy. “I see the potential for this drug to be combined with many therapies,” Ueno says.

The NCI is recruiting patients for a trial of Xofigo combined with the chemotherapy drug paclitaxel to treat breast cancer that has spread to the bone. MD Anderson and University of Michigan researchers also plan to test a combination of the drug and chemotherapy in a trial that will start enrolling patients with metastatic breast cancer in the fall of 2020, Ueno says.

Approved by the FDA in 2018, Lutathera is a radioactive isotope attached to dotatate, a molecule designed to bind to somatostatin receptors, which are present on the surface of certain types of tumor cells.

Once the drug binds to the tumor cells, the emitted radiation kills them. The FDA also approved a diagnostic imaging test that uses dotatate with the radioisotope gallium-68 to pinpoint tumors expressing somatostatin receptor. That offers oncologists the ability to determine selectively which patients are ideal candidates for the radiopharmaceutical.

One trial leading to the FDA approval of Lutathera included patients whose cancers had progressed after treatment with octreotide, a hormone suppressor that’s often used to treat neuroendocrine tumors in the gastrointestinal tract. With the addition of Lutathera, the 20-month progression-free survival rate, meaning the length of time from the start of treatment until worsening disease, was 65.2% versus 10.8% in those receiving octreotide alone.

Several studies are underway in other tumors that express the somatostatin receptor and therefore might be responsive to Lutathera. They include trials in the pediatric brain cancers neuroblastoma and meningioma, as well as in multiple rare cancers of the endocrine system that can’t be removed surgically.

Meanwhile, companies and researchers leading the development of radiopharmaceuticals continue to find new ways to target radiation directly to tumors. Bayer HealthCare, which developed Xofigo, is working with the NCI and others to study a thorium-227 conjugate, a drug that links the radioactive element to a ligand antibody, a protein in the immune system that neutralizes disease-causing pathogens. That targets prostate-specific membrane antigen, a protein that is highly produced in prostate cancer.

Thorium-227 decays to become radium-223, but when conjugated to a ligand antibody, it could offer advantages over the older drug, Kunos says. “Because (thorium-227) is tied to an antibody that’s very specific to cancer cells, it can potentially find those cells anywhere in the body,” Kunos explains. “That means we can treat both the cancer cells that we see and those that we don’t.” 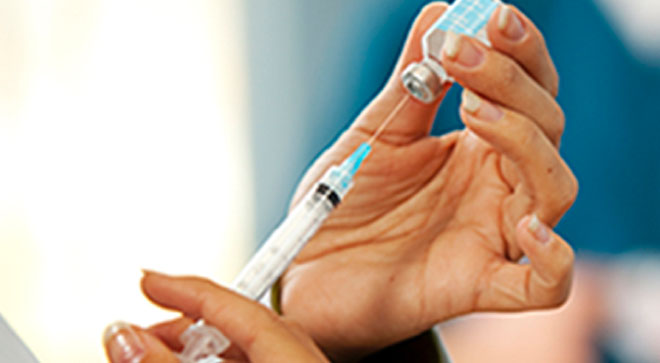 Even though shrinking tumors is a primary goal of oncologists who prescribe radiopharmaceuticals, providing pain relief is also important. Strontium 89, a therapy designed to relieve pain in patients with metastatic cancer to bones, was reintroduced in March after being abandoned by several companies that were making it previously.

The agent is typically injected once every three months, though studies have shown that its effects can last as long as six months. Side effects include chills, fever and flushing. The NCI also plans to investigate radiopharmaceutical tin-117m stannic diethylenetriaminepentaacetic acid to relieve pain in patients with metastatic prostate cancer in the bones.

Improving diagnostic strategies is another priority in developing new radiopharmaceuticals. These drugs are used along with imaging technologies to locate several types of cancers. For example, if levels of prostate-specific antigen are high, PET scanning might be done with the radioisotope carbon-11 or fluorine-18 to find prostate cancer. Similarly, gallium-68 can be used to locate neuroendocrine tumors before treatment with Lutathera.

Some researchers are developing new ways to find cancer with radiopharmaceuticals, which could improve early detection of the disease. Researchers in Germany are developing an imaging system that targets fibroblast activation protein, which is produced by cancer fibroblasts, cells found in connective tissue. In a study published in 2019, the researchers demonstrated that they could use the technique to identify 28 types of cancer in 80 patients.

Radiopharmaceuticals have been evolving, and some, including fibroblast activation protein-specific inhibitors, are taking on broader roles in the diagnosis and treatment of cancer. Sodium iodide I-131 was initially designed to treat thyroid tumors, but a lower-strength version was introduced for use in diagnosing metastases from some types of thyroid cancer. Patients receive the radiopharmaceutical either as a pill or by injection. Thyroid cells take up the iodine, after which a special camera can be used to find metastases.

Using radiotherapies for both diagnosis and treatment, an approach called theranostics, could expand in the future, predicts Dr. John M. Hoffman, professor of radiology, imaging sciences and neurology at the Huntsman Cancer Institute at the University of Utah in Salt Lake City. “There are radiopharmaceuticals that can be used for imaging, and then once a cancer is found, the same agent can be attached to a therapeutic radiopharmaceutical with much higher energy, so we can treat it,” Hoffman says. Clinical trials are testing these strategies in metastatic cancers, including some in patients with neuroendocrine tumors.

There’s growing interest in combining radiotherapies with new classes of cancer drugs, especially immunotherapies, which prime the immune system to recognize and destroy tumors. The NCI is preparing to start a trial that will combine radium-223 with Bavencio (avelumab), a drug that inhibits the immune checkpoint protein PD-L1, plus a drug called peposertib that blocks cancer cells’ ability to repair their own DNA after it is damaged by radiation. “We’re trying to harness the effects of the immune system to kill more cancer cells after the radiation and peposertib exposure,” Kunos says.

When Dr. Howard Schiff learned in 2013 that he had metastatic prostate cancer, he brought an insider’s perspective to his treatment plan: He is a urologist affiliated with Mount Sinai and NewYork-Presbyterian hospitals in New York City. After responding well to androgen deprivation therapy and the bone-protecting drug Zometa (zoledronic acid), he consulted with an oncologist at Mount Sinai to put together a plan for “multimodal sequential therapy,” a progression of treatments that would reduce the chances his cancer would recur.

Schiff had his prostate removed, after which he was treated with the chemotherapy drug docetaxel for six months, then the androgen blocker Xtandi (enzalutamide) for three months and Xofigo for another three months. He has been cancer-free since finishing the treatments in 2016 and is now on androgen deprivation therapy only. Schiff, 71, has since recommended that some of his patients with bone metastases seek out radiotherapy.

“When you have bone metastases, the radium kills the cancer cells and lets the bone heal,” Schiff says. Now he reads about radiotherapy developments with interest and enthusiasm, he says: “If they can come up with better solutions for this disease and for other cancers, so much the better.”
Be the first to discuss this article on CURE's forum. >>
Talk about this article with other patients, caregivers, and advocates in the Metastatic Breast Cancer CURE discussion group.