After multiple bouts with cancer, Taylor Hendrix was inspired to become an oncology nurse.
BY Katie Kosko
PUBLISHED September 07, 2016 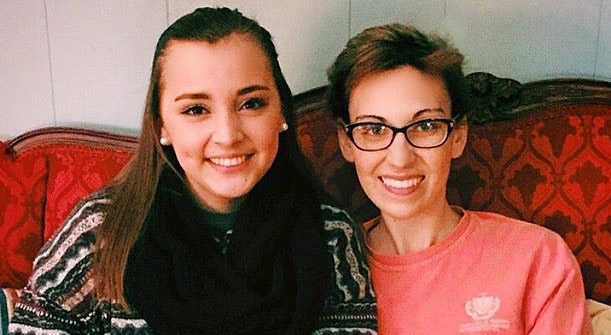 A note from Taylor: This is Corbyn (on the right). She passed away a few years back, but she was by far one of the best friends I made throughout treatment.
When you think back on the sixth grade, you may remember getting together with a childhood friend, playing your favorite sport or simply being carefree. For Taylor Hendrix, life at age 11 was turned upside down. It was then that she learned that she had cancer.

In 2006, Taylor swam every morning for several hours on a swim team in her hometown of Florence, Alabama. A pain in her right shoulder started to develop, but she figured it was just from overworking her body during practice. That pain eventually made her entire arm go numb in her second week of sixth grade.
“You know the feeling when your arm goes numb, like thousands of pins and needles — well, this pain was 10 times worse,” says Taylor.

Her mom picked her up from school and took her to a bone and joint physician, who performed X-rays and found a large mass. He didn’t want to scare them or mention the word “cancer” without being 100 percent sure, so he referred them to Birmingham Children’s Hospital.

The Fight of Her Life

It was there, after further testing, that Taylor got the diagnosis of a pediatric bone cancer called osteosarcoma.

“I knew something was wrong, but I didn’t actually think it was that bad,” she says. “I realized when my parents told me and they were upset about it that it was really something bad.”

During her third relapse in 10th grade, Taylor was referred to Nabil Ahmed, M.D., the lead investigator in the Her2 Chimeric Antigen Receptor Expressing T Cells in Advanced Sarcoma (HEROS) clinical trial.

In the trial, a procedure called lymphodepletion is being tested before the administration of engineered T cells. Taylor was treated under the trial in January 2012.

“I wholeheartedly believe it’s what made me better and helped me stay cancer free,” Taylor says. “That doctor has been keeping in touch with me, so I am constantly doing stuff with them to keep up with blood work.”

It was through the HEROS trial that Taylor also got involved with Stand Up To Cancer, a charitable organization aimed at raising funds to accelerate the pace of cancer research.

At the age of 21, Taylor has been cancer-free for three years. She has had 13 surgeries, and is living with one lung and a reconstructed arm, yet she says fighting for her life has helped her find her path. Her personal cancer journey has led her to pursue a career in oncology nursing at the University of North Alabama, where she will graduate in May 2018.

“When I got sick again, I really struggled with what my purpose was in life,” says Taylor. “I got really depressed. I felt like if my life gets normal for just one minute, something is going to go wrong. It changed my outlook on life and what I want to do with my life. I want to help others and be there for others. I want to be that support system that I wanted so badly and the nurses were for me.”

Taylor says not only were her nurses there for her during long hospital stays, but they were also there for her mom and dad. Her father became the sole provider for the family when her mother quit her job to be her caregiver.

During those hospital stays, visitors were scarce because of the length of the drive from Florence to Birmingham: two hours one way. It was then that her nurses became her family. Taylor recalls one time that a nurse’s husband delivered Sonic and a DVD to her hospital bed; it meant the world to her.
Taylor hopes to be that support system for other children battling cancer, as well as their families. Through her schooling, she is gaining hands-on experience and plans to one day go on to get her nurse practitioner license.

“I really don’t think there is anything else that I am meant to do,” Taylor says. “When I was being taken care of, I thought it really takes a strong person to do this. Without positive people there throughout treatment I would have been a lot more depressed than I actually was.”

Improving quality of patient care is another goal that Taylor hopes to accomplish. She adds that being able to walk the hallways or go lay next to a friend, who was also getting treatment, helped lighten her mood during long hospital stays. She wants policy makers to consider the advantage of letting certain actions take place.

Being a cancer survivor has given Taylor extra drive. Though she can no longer swim, she does enjoy staying active in her sorority, giving back to the community and serving as a leader in a bible study program. When she’s not studying for school, she also finds comfort in caring for her two miniature dachshunds.

The next year of Taylor’s life will consist of check-ups every four to six months that include CT scans, chest X-rays and blood work. Doctors hope to move her to long-term clinic care in order to keep an eye on side effects from cancer treatment, such as the long-term effects chemotherapy has on the body.

“I didn’t think that I would ever get to this point,” says Taylor. “I am learning to accept the fact that, yes, I have been through a lot, but it’s made me who I am.”
“I may have difficulties, I may not be like my other friends, but who really wants to be like everyone else?”
Stand Up To Cancer will host its fifth biennial television special Friday, Sept. 9 to help raise funds and awareness for cancer research. Hollywood’s biggest celebrities are lending a hand including: Ben Affleck, Matthew McConaughey, Emma Stone, Anna Kendrick and many, many more. There will also be special performances by Celine Dion and Keith Urban with Little Big Town. The telecast kicks off at 8pm/7pm Central.
Be the first to discuss this article on CURE's forum. >>
Talk about this article with other patients, caregivers, and advocates in the Lung Cancer CURE discussion group.