Wrapping Up the Big One: Celebrating Birthdays After Cancer

How to survive your own breast cancer survival surprise party.
BY Carolyn Choate
PUBLISHED November 28, 2017
Carolyn Choate recently retired from the TV production industry to write full-time. Diagnosed at 45 with stage 3 estrogen receptor-positive breast cancer in 2003, she underwent two radical mastectomies - in 2003 and 2012 - without reconstruction. Carolyn credits Angela Brodie, Ph.D., and her discovery of the aromatase inhibitor, for saving her life and those of millions of women globally. In the summer of 2017, Carolyn and her older daughter kayaked from New Hampshire to Baltimore in tribute to Dr. Brodie. When not informing others about Dr. Brodie and the "living flat" movement, Carolyn enjoys gardening, cooking and RVing with her family and dog. 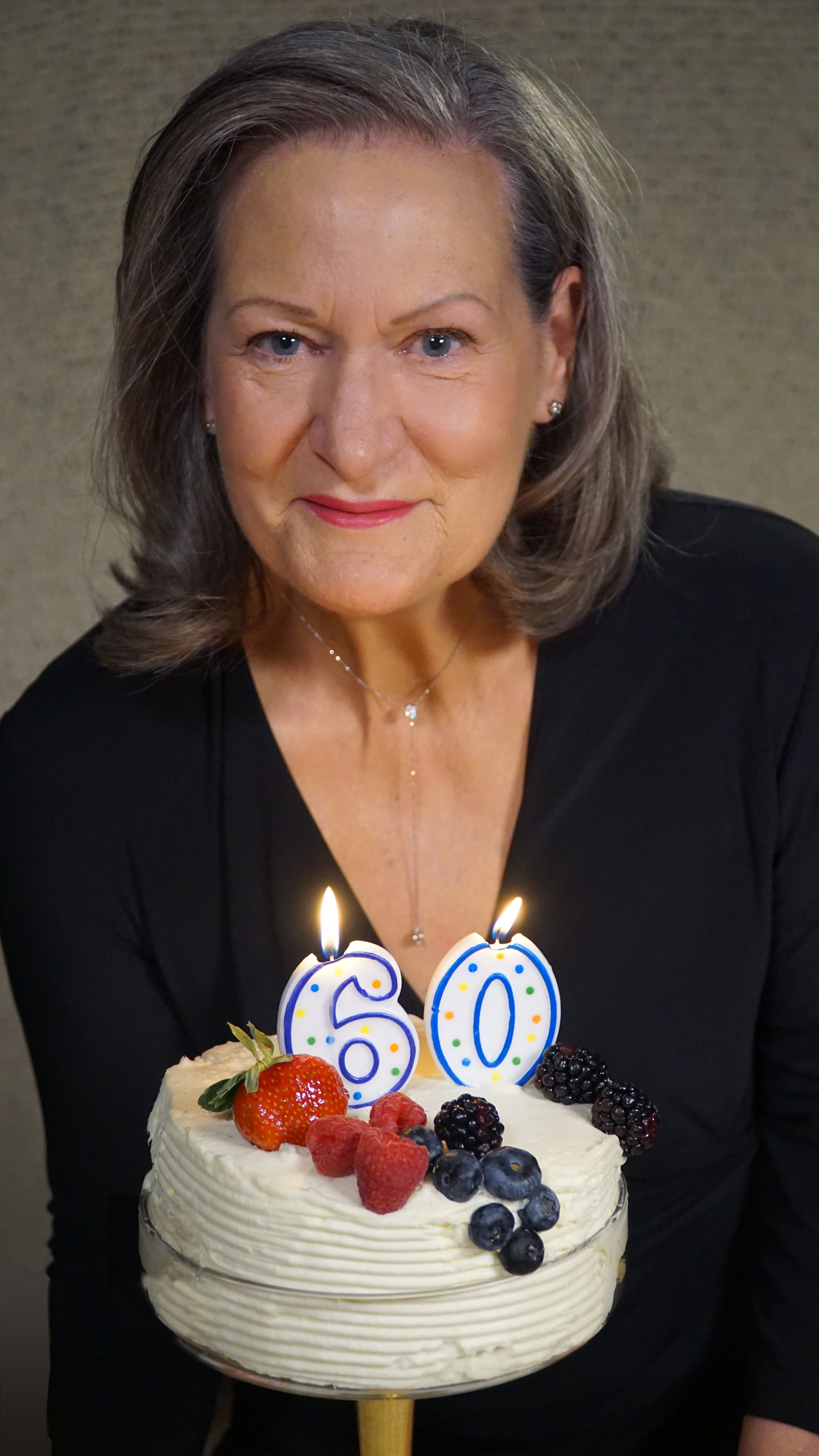 I’m heading for the big one. With the holidays upon us and my 60th birthday, my latest hairstyle and the new, sexy black dress, I couldn’t be more excited.

Ahhh. You think I’m kidding, don’t you? A little facetious reverse psychology directed at the reader – or perhaps myself, convincing us 60 is the new 40. Or something like that.

Well, I’m dead serious. Let’s be clear. When diagnosed with stage 3b ER-positive breast cancer in 2003 at the age 45, I was given three years to live. To me then, 60 was old. I’d never live long enough to get there.

The five-centimeter tumor in my right breast with metastases to four lymph nodes required a radical mastectomy, aggressive chemotherapy, radiation and adjuvant therapy with an aromatase inhibitor for five years. With such a grim diagnosis, I decided against reconstruction. Why bother?

As a writer, I dabbled in my own fatalistic personal non-fiction. There was a lot I’d miss out on – our daughters’ high school and college graduations, our 25th wedding anniversary, completing my master’s degree, seeing Michelangelo’s “David” with my own eyes, riding a horse in Costa Rica. Still, I was as healthy as one by my third cancerversary at 48, but waited to celebrate until the day after just so I could gloat about it.

How long did you say I had, three years? Hmph, I defied the odds with a day to spare and it was a Leap Year to-boot!

Turning 50, I remember, was all about making up for lost time. I deserved it! I was simultaneously thrilled to live well past my expiration date, yet vowing not to look – or act – my age. This was no easy task when chemotherapy made my skin look older than the Shroud of Turin. But it was nothing a trowel of Restylane couldn’t fix. This was in addition to the small fortune spent annually at the hair salon to cover the grey that muddled the auburn that hid my mousy, suddenly curly, brown locks that finally grew back after months of baldness.

True, I had another mastectomy – the second time prophylactically – to quell the insistent cancer recurrence panic attacks. The upside was the allusion that by downsizing from my D-cup cyclops boob and prosthetic to a perfect pair of prosthetic Bs, friends actually thought I lost 20 pounds.

“You look so svelte,” they cooed. “Did you have liposuction?”

To make sure I didn’t disappoint admirers or embarrass my daughters with panty lines, a muffin top, or, God forbid, a blob of back fat escaping from beneath the Frankenbra, I dished out more for Spanx.

Needless to say, beating cancer isn’t easy and from this 59-year-old’s perspective, surviving it isn’t either. It’s been emotionally, physically and financially draining. At times, it was downright complicated.

But as I’ve had the ultimate luxury of getting older, I’ve found that what I once deemed beautiful or youthful, vital or meaningful, was an insecure woman’s blind acceptance of the world’s standards. It was a world without cancer. But embracing my circumstance and seeing the genuine beauty that rises like a phoenix from the ashes of a debilitating illness? That was a real lifesaver.

For example, there was the time I outright boycotted my Frankenbra out of utter frustration. (Pun intended.) The chic number I wanted to wear with a daring neckline for a much-anticipated social engagement became a defining moment because of Frankenbra leakage.

“If this polyester/spandex monstrosity can be seen peeping out from this divine Joseph Ribkoff top, I’d rather go braless and flat!” I thought.

Which I did, and the result was a game changer.

Soon my act of defiance inspired a solo vacation to the Greek islands – where goddesses rule. Call it a testing ground, of sorts. While no one mistook me for Helen of Troy, no one laughed me off Kamari’s black beach sporting a brilliant blue maillot with the shelf-bra removed, either. And then it hit me, an epiphany worthy of Aristotle: It’s not breasts that make me a woman; it’s my mind.

Since that day, I stopped wearing a prosthetic bra altogether, exude feminity in spite of flatness (even if it is my own biased opinion) and couldn’t be happier.

Oops! I spoke too soon. I forgot to mention my hair.

It really started to get to me after the air cleared from burning all those bras. I mean how could I truly embrace the miracle of getting old – make that older – and color my hair as if I was still in my 40s? It just felt wrong. Like I was cheating. Not on my husband but, on myself.

Then, serendipity struck. At a restaurant. She was seated across the room and I couldn’t help but stare at her – a woman around 70 and the picture of vitality. Her hair was gorgeous – shocking silver and styled in a smart, shoulder-length blunt cut. That’s all it took. I was in love. With the idea that my hair could look like that.

Dear God, I prayed on the spot, I will gladly forsake eight-week root touch-ups, foiled highlights that take my already graying hair forever to absorb, and any/all sexual innuendos about red heads if you will crown me with such glamorous silver tresses.

Hey, the transition wasn’t easy. Cutting out the color an inch at a time over the past year wasn’t exactly my idea of productivity. But like the metamorphosis of a caterpillar into a butterfly, once I immerged from the cocoon of predictability, I took flight and never looked back.

My hair – my silver hair - looks better than I ever imagined. It’s going to look stunning with the new, sexy black dress – a wrap-around that flatters my curves and has a plunging neckline that celebrates the confident, beautiful woman I’ll be at 60. For real. Just in time for the holidays.
Be the first to discuss this article on CURE's forum. >>
Talk about this article with other patients, caregivers, and advocates in the Breast Cancer CURE discussion group.