My Great Escape from the Cancer State

With wit and wisdom, Carolyn Choate recounts the resilience of cancer survivors everywhere to outwit the enemy within.
BY Carolyn Choate
PUBLISHED January 11, 2018
Carolyn Choate recently retired from the TV production industry to write full-time. Diagnosed at 45 with stage 3 estrogen receptor-positive breast cancer in 2003, she underwent two radical mastectomies - in 2003 and 2012 - without reconstruction. Carolyn credits Angela Brodie, Ph.D., and her discovery of the aromatase inhibitor, for saving her life and those of millions of women globally. In the summer of 2017, Carolyn and her older daughter kayaked from New Hampshire to Baltimore in tribute to Dr. Brodie. When not informing others about Dr. Brodie and the "living flat" movement, Carolyn enjoys gardening, cooking and RVing with her family and dog. 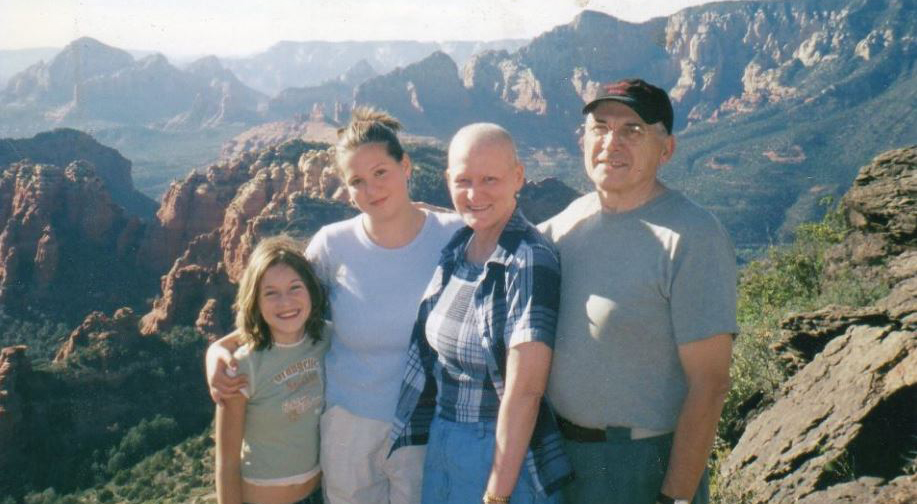 “Cancer annihilates the possibility of living life outside cancer. It is a total state.” – Siddhartha Mukherjee

Well, now, ain’t that a fine way to start the year? But there it was, big as life, staring at me from Twitter: a quote from Siddhartha Mukherjee, 2011 Pulitzer Prize-winning author of “The Emperor of All Maladies: A Biography of Cancer,” the riveting, epic tale of the very disease that once colonized my right mammary gland and lymph nodes and sought to lay claim to other prime territories.

A kind of Renaissance man of oncology, arts and sciences – among other things – and just 48 years old, God only knows where Mukherjee is headed next with the Midas touch he possesses.
He had me seeing red, at least temporarily.

I mean think about it. Cancer annihilates the possibility of living life outside cancer.

Otherwise, he’d understand what this survivor knows all too well. Parenthood gave me plenty of opportunities to live life outside cancer, even when in the thick of it. As did my marriage. My job. Ditto for community service. Nature.

Because despite the cold reality of Mukherjee’s maxim – and all the pain we humans with cancer endure – there exists a power that is equal to or stronger than life’s worst nemesis: the cancer patients’ will to escape the confines of their disease, if only in the mind.

Lucky to call myself a survivor today, I can’t – make that won’t – forget the sudden, precipitous fall down a bottomless elevator shaft as my grim prognosis was relayed by a visibly shaken surgeon. My body did the only reasonable thing it could in such a situation; my mind escaped its flesh and bone mooring and floated to the ceiling of the post-op room where it stared down in sympathetic intrigue at the helpless woman below.

I became the consummate escape artist from day one. I suspect many in the Cancer Club do.

Who wants to read Edgar Allan Poe 24/7 when volumes of “Chicken Soup for the Soul” are on the same shelf? We know the plot line of the former - the sinister characters, the sordid details, the unhappy endings. How could “The Pit and the Pendulum” fortify us for the journey ahead?

And while we still don’t really know the medicinal curatives in actual chicken soup, there’s something to be said about how the human spirit seems to naturally gravitate towards and is uplifted by anything resembling comfort food, be it edible or edifying. We do it because, despite our cancer, we live in defiance of the cancer state and all it represents: our very antithesis.

As a local media personality in town, I unabashedly use my position and cancer experience to help others navigate their concerns and fears about cancer and cancer treatment. (I’ve been called “the Grocery Aisle Therapist.”) I often tell those newly diagnosed that my children were part of my treatment plan and that they, too, would be well-served, including family or friends in theirs.

With my kids being just 12 and 9 years old when I was diagnosed with Stage 3B ER-positive breast cancer in 2003, my husband and I determined early on that the best thing we could do for our daughters under the circumstance was to give them as normal a childhood as humanly possible.

Sure, they knew I had a serious illness and that I required major surgery and would need treatment. My bald head spoke volumes, but I vowed not to be one of those maudlin, sky-is-falling whiners burdening them with the weight (and daily pain and worry) of my disease. So, it was breakfast and dinner with the family as usual; the same upbeat, humorous banter as usual; the homework checks, piano lessons, dance lessons, swim team taxi service . . . as usual.

But when July rolled around that apocalyptical year – just halfway through my grueling, eight-week dose-dense chemotherapy regime – and the girls went off to summer camp for two weeks, I made a rather startling discovery. Without them around to fuss over and care for, laugh with and talk to about the latest edition of Samantha Brown’s global travel adventures on TV or just hang out together on a Friday night in the family room and dance to Aerosmith or Eric Clapton, cancer recaptured this runaway’s imagination. A prisoner of my own thoughts.

“Funny,” I mused, “I was protecting them from the harsh reality of my cancer when, unwittingly, they were protecting me.”

The next day, I began strategizing plans with faculty at the local GED and ESL center for helping low-income women in my community without high school diplomas, as well as immigrant women who didn’t speak English, learn about the benefits of early detection and breast health.

There would be mission statements and curriculum to write, resources to gather, volunteer educators to recruit, fundraisers to plan, community stakeholders, including local hospitals, to influence, and, most importantly, women with difficult life issues and cultural barriers to persuade that self-exams and mammograms are life-saving. Who had time to ponder if I’d live long enough to see it all come together? (Thankfully, I would.)

And, there was work besides, because I refused to miss a day after taking two weeks off for my mastectomy. I worked five days a week as a local TV talk show host “. . . bringing you the people, places and events that make our corner of the world unique.” The 89-year-old New Hampshire legislator, Angie Kopka; the dedication of a long-awaited new high school in the Gate City; Nashua’s Holman Stadium, commemorating the nation’s first interracial baseball game with players Roy Campanella and Don Newcombe, Mr. Newcombe on hand for the festivities and an interview with me.

I lived – literally - to inhabit other’s worlds; me, the alien without hair, sporting a wig I swear was made from an Afghan Hound. (That, I surmised, would account for the itch. Fleas?)

“Hey, let’s go see the Grand Canyon!” my husband said when my chemotherapy and radiation ended. I always wanted to. The kids were so excited. I saw something so much bigger than myself and got comfortably lost contemplating the cosmology of the universe.

Had to catch a show in Vegas afterwards.

All these years later? I bet I could teach David Copperfield a thing or two. And even, perhaps, Siddhartha Mukherjee. Turns out, I’m the ultimate escape artist.
Be the first to discuss this article on CURE's forum. >>
Talk about this article with other patients, caregivers, and advocates in the General Psychosocial Aspect Topics CURE discussion group.