Copyright © 2019
CURE Media Group.
All rights reserved.
Cure Media Group, LLC. All Rights Reserved.
CURE does not provide medical, diagnostic, or treatment advice.
Currently Viewing
A Recipe for Cancer Recovery
September 11, 2015
Scale Back: Honoring My Changed Body
September 11, 2015
Sleep Better Longer
September 10, 2015
180 Days From an Allogeneic Stem Cell Transplant
September 10, 2015
Melanoma, Melanoma, Oh My Skin Woes and a New Option - For Some
September 04, 2015
Living With Stage 4 Breast Cancer: My Semi-Charmed Kind of Life
August 28, 2015
Yoga Heats Up Around the World: Yoga and Cancer
August 28, 2015
MRI Would Rather Not, Thank You
August 27, 2015
It Gets Better After the Shock of an Initial Cancer Diagnosis
August 26, 2015
Part VI: How GIST and I Became Acquainted
August 25, 2015
Print

A Recipe for Cancer Recovery

A male breast cancer survivor's menu for mending.
PUBLISHED September 11, 2015
Khevin Barnes is a Male Breast Cancer survivor, magician and speaker. He is currently writing, composing and producing a comedy stage musical about Male Breast Cancer Awareness. He travels wherever he is invited to speak to (and do a little magic for) men and women about breast cancer. www.BreastCancerSpeaker.com www.MaleBreastCancerSurvivor.com
I’ve always had an interest in cooking. In fact, my first jobs as a young man were in the food industry and for a time I was the head chef in a small Italian restaurant in California. Here’s the way that happened.

I was a senior in high school working in a Denny’s-like family restaurant in Newport Beach. I was what the industry referred to as a "fry cook." There was not much that was exotic in that, but it was a job and I did it well.

One day I was walking down a back alley near where I worked. This particular area of Newport was known for its upscale restaurants and I ran into a man in a white chef’s outfit, sitting in a chair behind one of the Italian eateries with a cigar in one hand and a cast on his leg.

The restaurant had just 22 seats, two food servers and one chef. And in this case, it was a chef with a broken leg. We talked a bit and I mentioned that I, too, was in the food business.

“You don’t know anyone who can fill in here for five weeks until this cast is removed?” he asked. “Why of course," I replied. “I’d be happy to help out.”

I knew nothing about Italian cooking. I was a kid in high school making grilled cheese sandwiches. But after meeting the owner of the restaurant and agreeing on a salary that was a big step up, I was hired. I spent two days with the chef as he showed me each and every dish he prepared. I took copious notes.

At the end of five weeks, the owner asked me to stay on indefinitely. I spent a year there and never did see that chef again.

The point of telling this is to make it clear that I’ve always taken charge of my own meals. I actually like to cook. But when I was diagnosed with breast cancer in 2014, I thought I should take a new look at my diet. After all, being an inspired cook does not guarantee a healthful diet.

My wife decided that fresh juices were called for. We bought a juicer. The organic carrots became non-stop companions. Fresh greens were added. Kale, a leafy thing I never dreamed of eating, became a staple. There were beets, broccoli and lots of garlic. I was caught up in this contagious cruciferous cuisine.

For years, I was unabashedly hooked on artificial sweeteners thinking incorrectly that I was doing myself a favor. When I discovered the natural sweetener called Stevia, I began to use it as a complimentary additive, replacing my white sugar consumption bit by bit. My afternoon blood sugar swings soon ceased.

As a cancer survivor, I think it is important to not simply decide upon a course of action for our healing, but to find a path that we can truly believe in and to steadfastly support the notion that our chosen method of treatment is healing us.

I found turmeric. Related to ginger, it gives a kick to curry dishes, along with a glowing golden color. 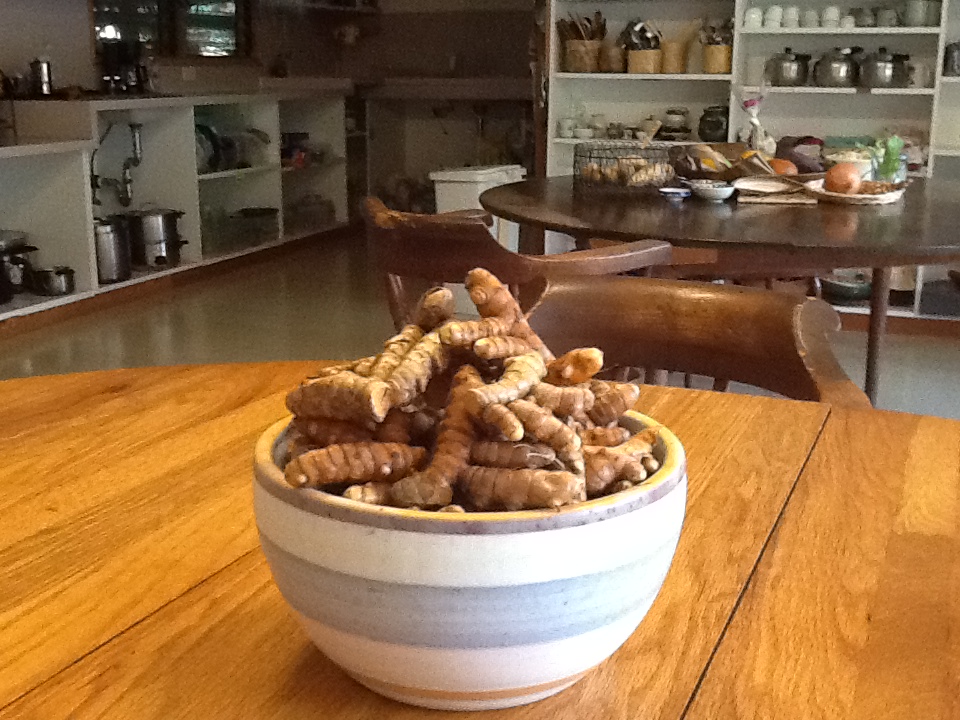 Turmeric harvested by Khevin in Hawaii

The science behind turmeric’s therapeutic ingredient called curcumin is sound. It has been shown to be a powerful anti-inflammatory agent and recently was demonstrated to have some anti-tumor properties that are hard to ignore. I discovered this lovely yellow root in Hawaii where, coincidentally, I was first diagnosed with breast cancer. I grew it, harvested it, juiced it and adored it.

Now, each time I drink or eat turmeric or take one of the many supplements available, I get a feeling that something good is coming my way. In this belief, I am able to visualize a healthy me as I happily ingest my anti-cancer cuisine.

Nobody really knows for certain just what effect any of the more than 80 traditional chemotherapy agents or countless natural supplements available today will have on any of us, and I make a point not to push any of my views on others, but to believe in our own choices, to support and embrace our own path through the garden of healing through which we walk can be powerful medicine.

All survivors take this cancer journey together and yet apart as we struggle to find our own point of reference from which to live day by day. Cancer has no definitive markers, no dependable parameters to allow us to formulate our future, and so we are left to find our own, often simple therapies to combat our disease. Feeling good about our choices and believing in our body’s intrinsic ability to heal itself certainly can’t hurt. The notion that “you are what you eat” has never been more delicious.
Khevin Barnes is a former fry cook, cancer survivor and breast cancer speaker living in Arizona.  He spends much of his time composing music while continuing to develop a healthy relationship  with vegetables of all kinds.
www.breastcancerspeaker.com       www.malebreastcancerblog.com
Be the first to discuss this article on CURE's forum. >>
Talk about this article with other patients, caregivers, and advocates in the Breast Cancer CURE discussion group.