For patients with B-cell lymphomas, new treatments are providing more options.
BY Heather L. Van Epps, PhD
PUBLISHED November 25, 2014
“I couldn't understand what they were saying, but I knew something was wrong,” recalls Heather McLean of the technicians who performed an ultrasound of her abdomen in late 2008. She had been coping with stomach pain for five to six years, and when the pain escalated and she began to gain weight, her doctors suspected gallstones. What they found instead was an abdomen full of tumors. A later biopsy revealed stage 4 follicular lymphoma, a slow-growing type of non-Hodgkin lymphoma (NHL) that arises in immune cells called B cells.

McLean’s cancer was widespread, and after a few months she began experiencing night sweats, one of the so-called “B symptoms” that is associated with more aggressive disease. She started treatment immediately with chemotherapy and Rituxan (rituximab), a targeted antibody drug that selectively eliminates those cancerous B cells. Five weeks later, she was not only in remission but was 25 pounds lighter after shedding the fluid accumulation caused by the cancer.

This past June, five years after remission, McLean’s cancer returned. Indeed, follicular lymphoma is characterized by good responses to treatment, but remissions become shorter with each relapse. 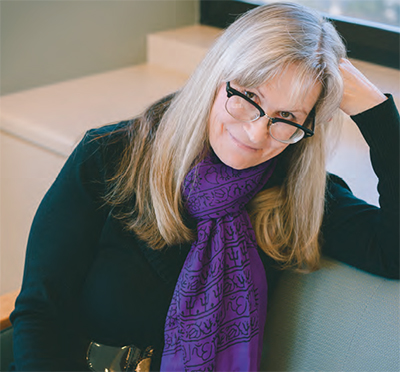 As Heather McLean considers the next move in her battle against follicular lymphoma, she remains optimistic. Photo by Mikelllouise Photography.

Fortunately, there are multiple options for treating follicular lymphoma that has relapsed after initial therapy, although these are not curative. There are also several investigational drugs currently in clinical trials, which give patients like McLean new options for coping with relapses and living longer with their disease.

Reaching Beyond the Standard

NHL is not one disease but a constellation of distinct cancers that arise in the body’s white blood cells—either antibody-producing B cells or infection-fighting T cells. These cancers are broadly divided into slow-growing and aggressive varieties, the most common of which is diffuse large B-cell lymphoma, an aggressive cancer that accounts for about a third of the more than 70,000 new NHL cases diagnosed yearly in the United States.

In the late 1990s, Rituxan revolutionized the treatment of B-cell NHL, curing more than half of patients with diffuse large B-cell lymphoma and substantially extending patient survival when combined with the go-to chemotherapy combination called CHOP, an acronym for cyclophosphamide, hydroxydaunorubicin (also known as doxorubicin or Adriamycin), Oncovin (a brand name for vincristine) and prednisone. But in the decade that followed, there was “radio silence,” says Hans-Guido Wendel, a cancer genetics expert at Memorial Sloan Kettering Cancer Center in New York, noting that Rituxan-CHOP (R-CHOP) remains the standard treatment for these patients today.

The problem with follicular lymphoma, Wendel says, is repeated recurrence and, subsequently, multiple cycles of treatment. Generally, only patients who have early-stage disease at the time of diagnosis can be cured.

“Every time, the tumor gets a little better as the patient’s bone marrow gets worse,” Wendel adds, referring to the cumulative toxicity and immune suppression that accompanies repeated chemotherapy. For these patients and the one-third of patients with diffuse large B-cell lymphoma who aren’t cured with R-CHOP or stem cell transplantation, new treatment options are sorely needed.

For patients with B-cell lymphomas whose disease has progressed after Rituxan-chemotherapy treatment, there are many options, but radioimmunotherapy drugs have proved effective in producing temporary, although sometimes longer, responses. These agents, including Zevalin (90Y-ibritumomab tiuxetan) and Bexxar (131I-tositumomab), combine antibody-based drugs (such as Rituxan) with a radioactive isotope to deliver a lethal hit of radiation directly to the cancer cells. Despite their success, these drugs are seldom used, says Bruce Cheson, head of hematology at Georgetown University’s Lombardi Comprehensive Cancer Center in Washington, D.C. He attributes the phenomenon to oncologists’ unfamiliarity with the agents, the necessity of referring patients to specialized radiation doctors or centers, and a small but real risk of secondary cancers. In fact, Bexxar’s maker stopped selling the drug in February due to waning sales.

Efforts to design new drugs, and to test existing ones in new settings, are based on an increasing knowledge of what makes these cancers tick. Scientists have already identified many so-called “signal transduction” pathways that are essential in order for normal B cells to grow, divide and survive, many of which are abnormally revved up in cancer cells. Agents that interfere with these pathways include Imbruvica (ibrutinib), Zydelig (idelalisib), everolimus, Torisel (temsirolimus), alisertib and ABT-199, among others, all of which have shown some activity against B-cell NHL and some of which are already approved by the U.S. Food and Drug Administration (FDA) for NHL or other cancers.

Zydelig was recently approved for patients with follicular lymphoma who experienced a disease relapse after two prior therapies. “[Zydelig] is a pill, which is attractive to patients, and it’s a pill that can work when chemotherapy won’t, which is pretty amazing,” says Brad Kahl, chairman of lymphoma research at the University of Wisconsin in Madison. Indeed, in the study that led to Zydelig’s FDA approval, a benefit was experienced by 54 percent of patients whose follicular lymphoma had not responded to, or had quickly relapsed after, Rituxan-chemotherapy. The drug is not currently an option for McLean, whose cancer initially responded to R-CHOP treatment, but it’s an option for subsequent relapses.

In early studies, participants with many types of B-cell NHL (including about half of those with relapsed follicular lymphoma and two-thirds of those with an aggressive form of B-cell NHL called mantle-cell lymphoma) benefitted from taking the oral drug Imbruvica, which received accelerated FDA approval for mantle cell lymphoma in 2013. Patients with mantle cell lymphoma tend to have shorter-lasting responses to R-CHOP and, until Imbruvica, they had fewer options when they experienced a relapse. Imbruvica was also recently approved for chronic lymphocytic leukemia, a first cousin to NHL.

Efforts are also being made to improve on the results that are possible with Rituxan by instead using different antibody-based drugs that target the same B-cell surface protein but kill the cell in somewhat different ways. These drugs, which include Arzerra (ofatumumab) and Gazyva (obinutuzumab), are being tested in various combinations, but Kahl isn’t sure that any of them will prove superior to Rituxan. Still others work the same way as Rituxan but bind to different B-cell surface proteins like CD19 (MEDI-551), CD22 (epratuzumab) or CD30 (Adcetris [brentuximab vedotin]).

Keeping track of these rapidly accumulating developments can be daunting for patients, particularly when they’re coping with the physical and emotional challenges of cancer treatment. McLean has done a lot of her own research and has kept meticulous records of every treatment, lab test and scan result along the way, something she suggests all patients do. She also joined a support group and was fortunate to befriend a woman who has the same diagnosis. “It’s important for people to find someone to walk with them through the journey, and also to be a detective for you, especially when you’re having a hard time doing things for yourself,” she says, joking that some days during her treatment she considered it an accomplishment to simply take a shower.

McLean is now considering a clinical trial with Imbruvica before undergoing another round of R-chemo with Treanda (bendamustine), an oral chemotherapy drug. Additional options on her list: a combination of Rituxan and the immunomodulatory drug Revlimid (lenalidomide)—a therapy known as R-squared—and stem cell transplantation.

Coming to Grips with Genetics

Clinical trial results have shown that many investigational drugs work better in some types of NHL than in others, a fact that reflects the distinct biology of each NHL subtype. A more thorough understanding of the genetics underlying these cancers may eventually allow the choice of treatment to be tailored to the individual. “There are clinical trials that look at the activation of specific pathways to see if you can predict which patient will respond to which agent,” Cheson says, “but these trials are early in their gestation.”

Early studies have already revealed several tricks that B-cell lymphomas use to stay alive, one of which is expression of unusually high levels of a survival protein called Bcl2. “Most lymphoma cells make too much of this protein, and this sends a signal to the cell that says ‘don’t die,’” explains Kahl, who says he’s excited about ABT-199, a drug that targets Bcl2. Although the drug works only modestly well on its own, it’s now being tested in combination with other agents. “It’s sort of like a one-two punch,” Kahl says, with the ABT-199 crippling the cancer cells’ ability to survive and then chemotherapy or other targeted drugs coming in for the kill.

McLean wants to know the genetics lurking within her cancer cells, particularly after learning recently that two of her ancestors died of chronic lymphocytic leukemia. So far, genetic testing is performed only in the context of clinical studies, but McLean says she would jump at the chance to participate in one of these types of trials.

Regardless of whether the genetics of each patient’s cancer is understood, it’s becoming clear that the real power of these investigational drugs is in their combination, as many patients are learning through successful treatment.

“I thought, ‘if we’re going to battle this thing, let’s really battle it,’” —Tom Ireland


In early 2014, 67-year-old retired engineer Tom Ireland received a diagnosis of stage 4 mantle cell lymphoma, a type of NHL that typically arises in older patients and has an average overall survival rate of five to seven years. Ireland’s treatment options were limited (his age disqualified him from undergoing stem cell transplantation), but he was able to enter a clinical trial of Velcade (bortezomib)—a drug that prevents cells from ridding themselves of toxic protein waste—in combination with Rituxan and Treanda.

But combining drugs, which alone are well tolerated, also increases their toxicity. “These agents should not be thrown together higgledy-piggledy,” Cheson says, “because you may get life-threatening or fatal occurrences.” Determining which drugs to combine, and how, means more research and clinical trials, and thus more patients willing to participate.

Ireland was pleased when he was randomized to the most aggressive arm of his clinical trial, which involved taking a combination of all three drugs. “I thought, ‘if we’re going to battle this thing, let’s really battle it,’” Ireland says. Four months in, his tumors were virtually gone. And although he describes Velcade as a “real kick in the butt,” with side effects including constipation and nausea that worsened with every dose, he says he managed it relatively well. 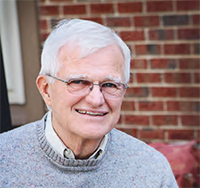 Tom Ireland was diagnosed with lymphoma and received combination treatment in a clinical trial. Photo by Susan L. Toon.

Ireland says he’s fortunate to have an oncologist who is savvy about the latest drugs and clinical trials, but many other patients aren’t as lucky. This is where nonprofit organizations, such as the Leukemia & Lymphoma Society and the Lymphoma Research Foundation, can help by identifying potentially relevant clinical trials that patients can then discuss with their oncologists. The groups also educate patients about their specific type of lymphoma and help them develop long-term cancer care plans. The LLS is currently helping Ireland navigate the billing morass involved with his clinical trial.

Meanwhile, as McLean considers the next move in her battle against follicular lymphoma, she remains optimistic. And despite the uncertainly of wondering whether every twinge or pain has something to do with the cancer, she envisions a future in which NHL is treated as a chronic disease rather than a deadly cancer.

[What's in a Picture? Imaging for recurrence]

Talking Points:
> Non-Hogkin lymphoma is a group of cancers, some slowgrowing and some aggressive, that affect white blood cells, compromising the body’s immune system.
> Follicular lymphoma, and in some cases diffuse large B-cell lymphoma, can be marked by repeated recurrences, so researchers aim to develop new drugs and test combination therapies.
Be the first to discuss this article on CURE's forum. >>
Talk about this article with other patients, caregivers, and advocates in the Lymphoma Cancer CURE discussion group.