Moving Mountains for Multiple Myeloma: The Peak Is Just the Beginning 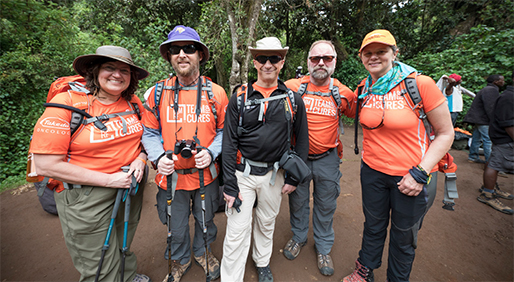 Multiple myeloma survivors Nancy Dziedzic, Matt Goldman, Gary Rudman, Terry White and April Jakubauskas bonded to accomplish their goal of climbing Mount Kilimanjaro.
When Nancy Dziedzic first read about a team climbing Mount Kilimanjaro in Tanzania on a multiple myeloma online support group in 2015, she was intrigued, but not sure if it was something she wanted to check off her bucket list.

The 51-year-old was living her “new normal” in Sacramento, California, following her multiple myeloma diagnosis in 2014. She had undergone five months of chemotherapy and a stem cell transplant and wasn’t sure if she had the strength to take on this challenge.

After watching the 2016 climb closely online, she decided this was an opportunity that she couldn’t pass up. So, Dziedzic applied to participate on the second climb.

“I was a little worried it would take quite a bit to get the strength to be able to do it, because I still had some fatigue,” says Dziedzic. “But I decided I needed a goal. Something to shoot for. Something to motivate me.” Dziedzic had just that. She, along with 15 others, were selected to journey to the top of Mount Kilimanjaro in February 2017, which stands 19,341 feet above sea level. The team was made up of six survivors living with multiple myeloma — Dziedzic, Matt Goldman, Mark Herkert, April Jakubauskas, Gary Rudman and Terry White — as well as an oncologist, research professionals and patient supporters. The adventure is part of the Moving Mountains for Multiple Myeloma program, which is a collaboration between CURE Media Group, Takeda Oncology and the Multiple Myeloma Research Foundation (MMRF) to raise awareness and funds for myeloma research.

The team members first met one another in July 2016 when they did a practice climb in Colorado. In addition to that training, most of the climbers did hikes or walks, or worked on a Stairmaster or elliptical machine, among other exercises, to help prepare themselves for what was ahead.

“I was mentally excited,” recalls Goldman, 55, from Long Beach, California, who was diagnosed with multiple myeloma in 2011. “The nerves hit while I was packing the night before I was leaving. I thought, ‘Am I really doing this?’”

The climbers didn’t meet again until they were ready to begin their 11-day adventure in Africa. Following a three-hour bus ride on a dirt road to the base of Kilimanjaro, they were off — accompanied by a team of local guides and porters, who led the way, helped carry equipment for camp and provided some much-needed inspiration when times got tough.

The team battled high elevation, low temperatures, rain, snow, hail and brutal winds, which were especially strong during the night of the summit. “The challenge itself was much more difficult than I anticipated,” says Goldman. “The first day, we were all so excited and ready to go. I got caught up in that excitement and went too fast, so that I was exhausted. Then, I went slow and steady and got through it. It was tougher than I imagined.” 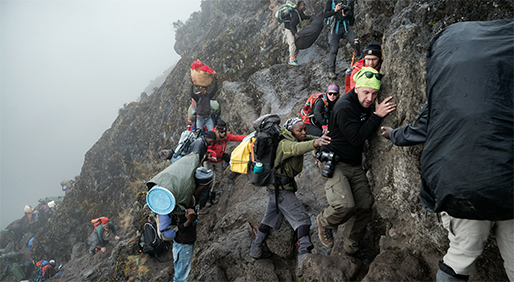 Climbers battled the changing climate and terrain of Mount Kilimanjaro with the help of local guides and porters, who helped carry equipment.- PHOTOS BY UNCAGE THE SOUL PRODUCTIONS
While Goldman didn’t reach the summit because, as he says, he “ran out of gas,” he felt that what he did endure exceeded his expectations — not only the climb, but the people, too. That is one aspect many of the team members can attest to.

“When we were there, it felt like we knew everybody for years,” says Rudman, 50, from Columbia, South Carolina, who was diagnosed in 2015 and is now in complete remission. “The camaraderie was just amazing, and it only grew and tightened with each minute of time, each day of hiking and each struggle on the way up Kilimanjaro.”

White, 56, from Juneau, Alaska, who received his multiple myeloma diagnosis in 2009, adds, “What a bonding experience that will last a lifetime, which I hope is a long time. You make those kinds of friendships over something like this. This is a life-changing experience.”

The night of the summit, that friendship grew even stronger. At 11 p.m. the team set off to reach the top of Kilimanjaro. The weather that night was challenging, as temperatures ranged from 25 to 30 degrees Fahrenheit, with winds so strong that some climbers had to turn their backs to it. And the climb itself was happening on a 45-degree angle. “Somewhere around 5:30 a.m., I face-planted,” says Rudman. “We were 800 to 900 feet below the summit. Some people wanted me to turn around, but others said ‘The patients are why we are here, and so Gary needs to continue.’ I was mad as hell at that point, and no one was going to stop me. I have a motto: Never quit. Never stop. Not today. Not ever.”

Rudman made it to Stella point, which is at 18,652 feet, and realized his body was done climbing. On the advice of the team doctor and MMRF staff, he turned back while the others pressed on.

White and Dziedzic were part of the team that made it to the very top — Uhuru Peak.

“We powered on up there together, but my tank was pretty empty,” White recalls. “But then, of course, you get that adrenaline rush when you get there. Tears were flowing, we were all hugging and you get this flood of emotions.”

For Goldman, Rudman, White and Dziedzic, their reaction was that this feat was out of reach when they first heard the idea. After participating in the climb, they agree that there is nothing that will keep them from living their lives.

“It puts everything into perspective for me for my future,” Dziedzic says. “When you are diagnosed, it’s hard to see the future because you don’t know what is happening. I feel more confident now that my future is going to have a lot of adventures, and that cancer is not going to be stopping me.” As far as other patients who are battling their own mountain, White says, they can overcome this, too.

“The dark days after diagnosis are bleak. People are looking for hope, and I can give them that, because I have been in this club a long time,” says White. “Life goes on, and you just get back on your horse.” 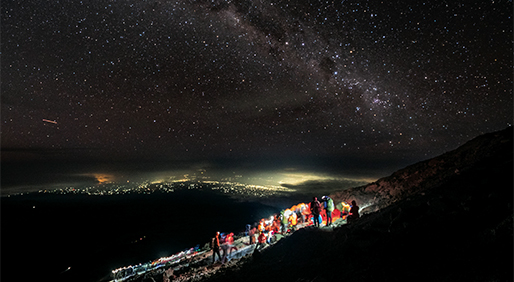 Before the climb, each team member committed to raising at least $10,000 to support the work done by the MMRF in the field of oncology and cancer research. The total goal was $250,000 — and they had exceeded that with more than $256,000 raised.

Although multiple myeloma is considered incurable, it is a highly treatable disease with a variety of drugs that can help patients live longer. The blood cancer is often diagnosed in people aged 65 and older, and more commonly in men. The American Cancer Society estimates that 30,280 new cases will be diagnosed this year.

“Kilimanjaro is the highest free-standing mountain in the world. With its sheer size and towering summit, it truly is an analogy for cancer,” says Marty Murphy, CURE Media Group patient education director, who made his second climb up Kilimanjaro. “It creates its own weather system, and it can change at a moment’s notice in any of its five ecosystems. Multiple myeloma, too, has its own weather system; though great advances have been made, it’s still non-curable. Some react well to certain therapies, and then the weather changes and the patient is no longer responding favorably, so another route on the mountain must be taken ... and on and on it goes during this journey up the mountain of multiple myeloma.”

Three more climbs are planned: Grand Canyon, Mount Fuji and Everest Base Camp. These climbs, like those already completed, will raise funds for the MMRF; through all the events so far, about $1 million has been raised for the group. “Patients need to take advantage of the things that are out there for us,” says Dziedzic. “They need to do some research and find things such as adventures like these, the MMRF and CURE® magazine. There is so much out there, and a lot of people don’t know that it exists.”
Be the first to discuss this article on CURE's forum. >>
Talk about this article with other patients, caregivers, and advocates in the Myeloma CURE discussion group.