Ovarian cancer is rare, and receives less research funding than some other cancers.
PUBLISHED April 28, 2017 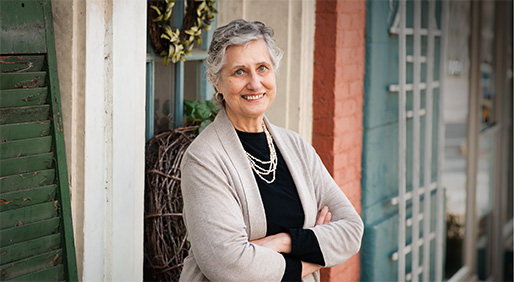 Not helping matters is the lateness at which ovarian cancer is typically diagnosed, with most women at advanced stages of the disease when it is discovered. Because symptoms — which include bloating, pelvic or abdominal pain, issues with eating or feeling full quickly, and urinary urgency or frequency — could be associated with the menstrual cycle or any number of conditions, they often don’t send up a red flag until the disease has progressed. In addition, the capacity of the abdominal cavity and the ample protection of the organs within it make it more difficult for women to realize when something is amiss, says Robert L. Coleman, M.D., professor and vice chair of Clinical Research in the Department of Gynecologic Oncology at The University of Texas MD Anderson Cancer Center. “There’s nothing that would specifically indicate something is going on, even if the ovary is getting quite large,” he says. “It’s not that ovarian cancer doesn’t have symptoms, it’s just that none of them are specific for early ovarian change.”

Rita Ferguson thought she had diverticulitis. It wasn’t until she underwent surgery to resect her sigmoid colon that doctors discovered stage 4 ovarian cancer. “I had no expectation of cancer at all,” says Ferguson, who was diagnosed two years ago at age 67 and doesn’t have a BRCA mutation.

Much research has focused on the development of a noninvasive screening test that would identify the cancer at earlier stages, according to Coleman. Thus far, however, none have proved sensitive or specific enough to affect disease-specific mortality in the general population.

“Across the board, cancer research has seen a decrease in funding due to federal and institutional budget cuts. This has disproportionately impacted ovarian cancer research and clinical trials more than other cancer types,” says Elizabeth Swisher, M.D., a professor in gynecologic oncology and an adjunct professor in medical genetics at the University of Washington School of Medicine and director of the Breast and Ovarian Cancer Prevention Program at the Seattle Cancer Care Alliance. “If we want to make progress with making new drugs accessible to people to help them live longer and save lives, we need support for clinical trials.”
Be the first to discuss this article on CURE's forum. >>
Talk about this article with other patients, caregivers, and advocates in the Ovarian Cancer CURE discussion group.