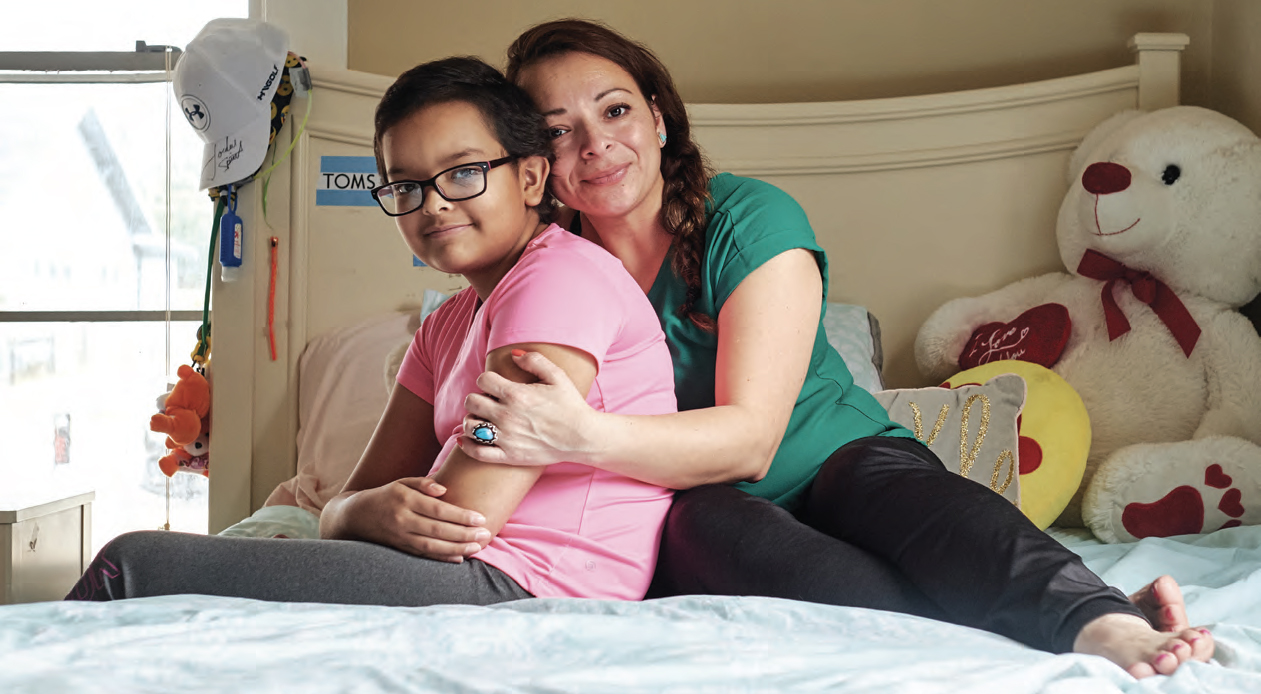 CAROLINA HERNANDEZ and her mom, JULIA LEAL, took a chance by opting for the newly approved CAR-T cell therapy. - PHOTO BY: JARED REY
In fall 2016, Carolina Hernandez, then 10 years old, started complaining that her bones hurt. Her primary care doctor attributed the symptom to growing pains. But by February 2017, the pain had become so severe that Carolina, an enthusiastic soccer and basketball player, could barely walk. She was brought to the emergency department.

Soon after, her family received the devastating news: Carolina had B-cell precursor acute lymphoblastic leukemia (ALL). The next five months passed in a blur of chemotherapy treatments. But Carolina’s cancer did not respond — cancer cells stubbornly remained in her bone marrow.

By October 2017, Carolina’s medical team said she had two choices left: a bone marrow transplant or a newly approved treatment called a chimeric antigen receptor (CAR)-T cell procedure. The latter involved removing and genetically re-engineering some of Carolina’s immune cells — T cells — to find a specific marker on her cancer cells and then kill them.

Carolina’s family opted for CAR-T. And although Carolina did have a fever right after the procedure, she now is much stronger. “The doctors are amazed at how quickly it worked — and how well,” says Carolina’s mother, Julia Leal, 40, a housekeeper who quit work to take care of her daughter. “I’m very hopeful. It gave me my life back, as well as my daughter’s life back. I’m very glad that we did it.”

Carolina is one of the first patients to receive this treatment, Kymriah (tisagenlecleucel), outside of a clinical trial. Two Food and Drug Administration (FDA) approvals for CAR-T cell therapy came in late 2017, one for use in children and young adults with advanced leukemia, and another for use in adults with refractory lymphoma. Although available only to a very specific group of patients, CAR-T cell treatment is a real breakthrough.

CAR-T cells are a completely different animal — a “living drug.” The procedure adapts the immune system to fight a patient’s own cancer, part of a larger field called immunotherapy, which has taken the oncology world by storm.

Rather than dragging a patient through months or years of treatment, CAR-T cell treatment takes just a few weeks. It offers the possibility of a durable cure to patients who had no options before.

CAR-T cell treatments involve regimens rather than drugs. The technique enlists a patient’s own T cells, a type of white blood cell. These lymphocytes recognize and remember invading bacteria and viruses by analyzing various markers on the surface of infectious or malignant cells.

“This is a new way to treat leukemia that is different from anything we’ve used before,” says Ted Laetsch, M.D., Carolina’s doctor and an assistant professor of pediatrics at the University of Texas Southwestern Medical Center in Dallas.

First, Laetsch explains, doctors take a blood sample and isolate the white blood cells. In the lab, they use a highly modified form of the virus that causes HIV to insert a new gene that makes the patient’s T cells. This gene causes T cells to attack CD19, a particular marker on the surface of B cells, another type of white blood cell that turns malignant in leukemia.

Meanwhile, the patient usually goes through some chemotherapy to make room for the edited T cells, which are dripped back into the circulatory system. If all goes well, these chimeric T cells multiply into an advancing army that takes out all the cancerous B cells by bursting their cell membranes, putting the patient into remission.

In a sense, CAR-T cell treatment combines cell therapy, gene therapy and immunotherapy in one package. Experts say it represents a radical departure from all medicines to date. “This is revolutionizing how we treat patients,” says Julie-An Marie Talano, M.D., director of clinical research in Pediatric Bone Marrow Transplant and Cellular Therapy at the Medical College of Wisconsin in Milwaukee and clinical researcher in Pediatric Bone Marrow Transplantation at Children’s Hospital of Wisconsin. “The next decade is going to be really exciting.”

In small, early studies, as many as 80 to 100 percent of patients responded to CAR-T cell treatment, leading the FDA to award breakthrough status to CAR-T treatments for B cell malignancies such as ALL and chronic lymphocytic leukemia, as well as some types of lymphoma.

In August 2017, the FDA approved Kymriah for treating patients aged 25 years or younger who have B-cell precursor ALL that resists other treatments — what doctors call refractory — or relapsed at least twice after traditional treatments. The approval was based on phase 2 results from a single-arm, international trial of 63 patients who received a single dose of Kymriah. Overall remission rate was 82.5 percent in treated patients. Forty patients (63 percent) had complete remission (CR), and 12 (19 percent) had CR with incomplete hematologic recovery (CRi). All patients who had CR or CRi were associated with negative minimal residual disease status in the bone marrow, meaning the blood or bone marrow is clear of the abnormal cells.

Kymriah was granted priority review early this year from the FDA to be used to treat adult patients with relapsed or refractory diffuse large B-cell lymphoma who either relapse or are not eligible for an autologous stem cell transplant.

So far, just a handful of patients have received Yescarta in the U.S. due to holdups with insurance, Medicaid and Medicare for payment.

Both Kymriah and Yescarta target a marker called CD19 that occurs on the surface of B cells. Investigators conducting ongoing clinical trials with CAR-T cells hope to recognize two markers, as well as explore other good surface targets for amped-up immune cells.

GREAT REWARDS BUT AT HIGH COST


CAR-T cell approaches were the darling of the annual American Society of Hematology (ASH) meeting held in December 2017. Clinicians are hopeful that the technique will extend to other blood cancers. For instance, just before the ASH meeting, the FDA approved a CAR-T cell regimen breakthrough status for treating multiple myeloma.

“This is one of very few therapies where it is intellectually honest to speak of a cure — that is a word that I use very rarely,” says James L. M. Ferrara, M.D., D.Sc., director of the Hematologic Malignancies Translational Research Center at Tisch Cancer Institute in New York City. “You know within four to six weeks if a person is likely to be cured. That in itself is a great advance.”

For now, this approach is approved only for patients who have not responded to several lines of treatment. And because the treatment is pricey, insurance companies are unlikely to approve its off-label use, doctors say. Still, many are trying to build the case that this might be effective earlier on, perhaps even at diagnosis.

“The next step is to move to upfront treatment in those B-cell leukemias that we already know are high risk,” says Dean Lee, M.D., Ph.D., director of the Cellular Therapy and Cancer Immunotherapy Program at Nationwide Children’s Hospital in Columbus, Ohio. “We will eventually make it to a point where we can deliver as a first-line therapy, even in more common leukemias.”

Because each treatment is custommade for every patient, requiring time, transit and complicated lab work, CAR-T cell regimens are expensive.

They cost substantially more than the bone marrow transplants that until now were the last resort in many blood cancers. The list price for Kymriah, the pediatric regimen developed by Novartis, is $475,000.

Kite Pharmaceuticals’ Yescarta is set at $373,000. Although some medical plans will get discounts and both companies have committed to helping patients who cannot pay, price will continue to be an issue, experts say.

Side effects of CAR-T cell treatment can be severe — essentially releasing weaponized immune cells into the body is bound to create some biological fallout. The most severe reaction is cytokine release syndrome (CRS), dubbed a “cytokine storm” to describe what happens when a feedback loop of immune responses causes inflammation, pain, fever and swelling that can spill over into life-threatening symptoms such as acute lung injury, sepsis and paralysis.

To treat severe or life-threatening CRS, the FDA expanded the approval of Actemra (tocilizumab) for use in patients two years of age or older. The approval is based on data demonstrating that in clinical trials of CAR-T cell therapy, patients who received Actemra had complete resolution of CRS within two weeks following one or two doses of the treatment.

CAR-T cell treatment can also be toxic to the nervous system, causing seizures or loss of speech, although these are usually temporary. In some patients, normal B cells don’t regrow, making transfusions of antibodies a long-term reality, Ferrara said.

That is also what complicates finding new targets to combine with this approach: A patient can live if the treatment kills every B cell, but that isn’t necessarily true of the immune cells of many other cancers. Some are crucial to life — it would be tough to survive without, say, brain or lung cells.

Despite the challenges, experts hope that the CAR approach may someday be used against new targets in solid cancers, such as epidermal growth factor receptor in glioblastoma — a rare but deadly type of brain cancer — or hepatocyte growth factor receptor, also called c-MET, in other solid tumors. Current studies are exploring CARs to fight sarcoma (a cancer of soft tissue), advanced prostate cancers, multiple myeloma, tumors of the chest cavity, and mesothelioma, as well as lung, breast and ovarian cancers.

The application to solid tumors remains challenging, experts say. Blood cancers are essentially the out-of-control multiplication of single cancerous cells. That’s a more straightforward target than a solid tumor, which is a bit like an organ gone rogue, with its own microenvironment and vascular system.

Solid tumors also create various cell messengers that can dampen or mute the immune response. Then there’s the question of delivery: How might CAR-T cells reach the middle of a solid tumor deep within healthy tissue? That’s not easy to figure out.

Several teams are exploring the development of off-the-shelf CARs, agents that would not be isolated from a patient’s cells but would instead involve a template that could be altered to order, even if a patient doesn’t have enough healthy T cells to culture.

Other centers are testing approaches where CARs are simultaneously targeting more than one tumor receptor. The Medical College of Wisconsin has developed a clinical trial with a CAR-T cell that recognizes two targets on B cells: CD19 and CD20. Although this is indeed a breakthrough, experts caution that there’s no guarantee of wide application. “It will be trickier in other blood cancers and solid tumors,” explains Nirav Shah, M.D., MSHP, assistant professor of medicine at the Medical College of Wisconsin, division of Hematology and Oncology, specializing in lymphoma and stem cell transplant at Froedtert Hospital, and a member of the Bone Marrow Transplantation and Cellular Therapy team.. “Right now, the success is really in the B-cell malignancy space.”
Be the first to discuss this article on CURE's forum. >>
Talk about this article with other patients, caregivers, and advocates in the Leukemia CURE discussion group.