A Long Family History of BRCA

Three sisters trace their family’s experiences with breast and ovarian cancer across generations.
BY Katie Kosko
PUBLISHED March 28, 2019
With an extensive history of breast and ovarian cancer in her family — dating to 1860 — and a breast cancer diag­nosis of her own, Susan Winn decided to take action. She was connected with Henry Lynch, M.D., at Creighton University in Omaha, Nebraska, who studied the Winn family and seven other families, eventually isolating the BRCA mutation.

Winn learned that her family had the most significant history of breast and ovarian cancer ever documented in the United States. She encouraged her daughters, Kathryn (Winn) Buckley, Bridget (Winn) Stillwell and Maureen (Winn) Boesen, to be tested for the BRCA gene. Bridget and Maureen tested positive.

Instead of keeping their story secret, the three sisters are sharing it in an upcoming book, “Nipples Optional.” In an interview with CURE®, they discussed how the BRCA gene changed their lives. 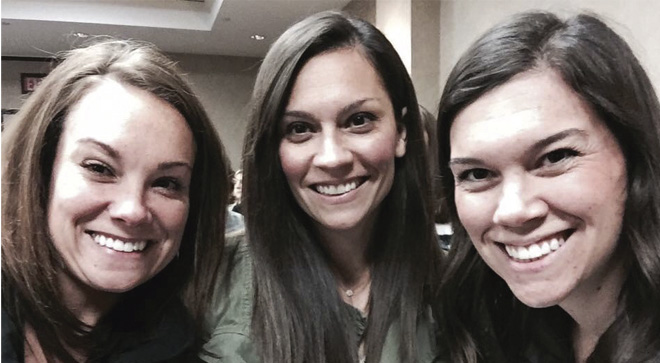 KATHRYN BUCKLEY, BRIDGET STILLWELL and MAUREEN BOESEN want to empower women to advocate for their health.

CURE®: What emotions came with being part of history but also learning of a serious health situation?
Maureen: We always joke that it’s not the claim to fame that we had hoped for in life. We take a lighthearted approach to this just because we find ourselves very thankful that we do know about it. Our parents and grandparents didn’t know that this was their fate, and we did. So we find ourselves fortunate to have been a part of this study and to be as knowledgeable as we are.

Kathryn: I’m BRCA-negative, but I will say this: I think we’re lucky, because had we not known we had this gene or been fortunate enough to find out, if we were to get the cancer diagnosis, we would have been shocked. We were lucky enough not to have a diagnosis among the three of us.

And second, I take my health a lot more seriously. I’m an advocate for being healthy and taking care of my body and going to the doctor when I need to because we’ve learned so much from science that we’re able to use that informa­tion to become healthier people.

Bridget: Even though Kathryn is BRCA-negative — and I don’t want to speak for her, but she’s been on this journey with us — it’s not like she’s, “I’m BRCA-negative. Peace out, ladies.” She is there by our side, and she has really experi­enced this with us. So it has bonded us that much more.

How did you three share this information with the rest of your family?
Kathryn: Our cousins on our (maternal) side were all a part of the study, so they are very much a part of this. I would say maybe the bigger thing is discussing this with our future selves, because it can significantly change a person as a woman.

Maureen: I met my spouse before I found out I was BRCA-positive and had my surgery. My spouse has a chronic disease, and because of that, we understood each other on a deeper level. We understood that life is short, and we need to embrace it and do what we can and not really dwell on the negative stuff in life; focus on what we can control; and make the best of the time we have. That sounds morbid, (but) it’s not.

Bridget: Our mom wrote a book, “Chemo & Lunch.” It was shared with all of the family: her side, my dad’s side and friends. When I met my spouse, I had already had the mastectomy and gotten the BRCA mutation diagnosis. And he lost his own father to prostate cancer pretty young, so he was so amazingly supportive and said, “Anything you need to remove from your body to save your life, you do it.”

How do you plan to have this conversation with your children?
Bridget: My daughter is the oldest of the cousins. She is 8 years old. And we talk about it a lot. It has always been an open dialogue, not necessarily that she could be predisposed to breast cancer, but why my body is the way it is, what I’ve done, and that Grandma had cancer. As they get older, it’s going to be something that, just like when we were growing up, (they) always knew that this was a part of (their) lives. It’s not going to be a bomb that gets dropped on her or my son when they’re 18.

Maureen: (My children) understand the level that they can. However, Bridget is very passionate and excited about finding out her kids’ genetic results. She said that (she) would find out now if she could. And I am terrified. Not that Bridget is not terrified, but I don’t want to find out. It’s one thing to be a BRCA carrier, but another when it comes to your children.

Bridget: I don’t think excited would be the word. I would be more interested to know. As they get older, I think it’ll be a good decision for us to make together when they are ready, and we’ll find out together so I don’t know some­thing about them that they don’t know about themselves.

Kathryn: I have two boys, and one is adopted. We will be getting genetic testing on him to find out what resides within his DNA. I don’t know that I would have even considered it, had I not known how beneficial genetic testing could be. Genetic testing is going to be a part of our lives and will be talked about a lot.

Can you discuss your upcoming book, “Nipples Optional”?
Maureen: We’ve always been inspired to tell our story like (our mother) did. When we started out, I think the idea was to document our story for our family, friends and children, so that they understand what we experienced. The story that we share chronicles our experiences over the last 20 years, from finding out we were positive to present day. And it goes back and forth between each of our experiences. It chronicles Kathryn finding out she’s negative (to) her experience with infertility for almost a decade. Then Bridget finding out she is BRCA-positive, having two children and then, unfortunately, experiencing infertility and miscarriages. At the same time, I found out that I was BRCA-positive. I got married and had my own children and later in life developed significant anxiety. It discusses (not only) BRCA and our preventive measures that we’ve taken to prevent a cancer diagnosis, but also women’s health issues that we have all endured — really just the crap that we deal with as women in life.

Bridget: You can reach so many people and tell them it’s going to be OK. I’ve been there, you’ll be there, and you’ll get through it. And this is how we got through it. We called it “Nipples Optional” because when you have a mastec­tomy, your nipples are optional. It’s become so much more than just hereditary cancer.

What advice do you have for others who want to learn about their family health history?
Kathryn: I’m almost 40, and I have a lot of friends who are getting to that age where they’re doing mammograms. I’ve had many people come up and say, “My mom, sister or aunt had breast cancer. Do you think I could possibly be BRCA-positive?” My first piece of advice to any woman in that situation is to take a deep dive into your family history: How many aunts? How many people have breast cancer?

Bridget: Talk to your doctor. If you have strong feelings, then push for genetic testing. It’s widely available. On the topic of talking about your family health history, it can be very scary. And some people say they just don’t want to know. My advice from going through this, surgery and everything, is don’t be afraid to know what is in the line of sight for you. Your risk is giving you the most health power you can have to save your life (and) change your life and your children’s lives.

Maureen: I would add that, as a woman you need to be an advocate for your own health. You need to stand up for yourself. You need to be vocal about your health.
Be the first to discuss this article on CURE's forum. >>
Talk about this article with other patients, caregivers, and advocates in the General Discussions CURE discussion group.