The seven-time Olympic medalist found strength in her competitive spirit through cancer.
BY Katie Kosko
PUBLISHED May 17, 2019
Competition and challenge are nothing out of the ordinary for Shannon Miller. At the age of 15, she took home five Olympic medals in 1992 and went on to win two more in 1996 making her the most decorated Olympic gymnast in American history.

But it wasn’t until 2011 that she faced her biggest obstacle: stage 2 germ cell ovarian cancer — a rare form of the disease. A new mother to a 1-year-old son and running her own business, Shannon Miller Enterprises, with a focus on health and fitness, the now 42-year-old felt she was too busy to slow down. In an interview with Heal®, Miller, now cancer-free, shares her diagnosis and life after the disease.

Heal®: How was your ovarian cancer found?
Miller: My diagnosis was really kind of out of the blue. I would tell you at the time that I didn’t have any symptoms, but what I would later come to find out was that I was having three of the primary ovarian cancer symptoms. But I didn’t know that they were anything important to think about. When you think about things like bloating and stomach pains, women pretty much have those every month and so you don’t think a lot about that. I lost about six pounds in a month. But I had just finished nursing my son. I thought I was losing baby weight. I did not associate that with something negative.

It was late in 2010, I went to a regular doctor’s appointment. And one that I admit I was ready to call and cancel because I was really busy. I was overwhelmed at work. I thought I could push it off. As I was waiting on hold, I thought better of it. I felt guilt. Here I was, an advocate of women’s health and I was not walking the walk. It was at that appointment, in about 15 minutes, that I found out that I had a baseball-sized cyst on my left ovary. And my world changed forever. I didn’t know at that point that it was cancer. So I entered that wait-and-observe phase that is so excruciating, and by January I was sitting with an oncologist hearing that it could be cancer and I was immediately scheduled for surgery.

When did you learn it was cancer?
When I found out that it was ovarian cancer it wasn’t a call back for an office visit. I went into surgery not knowing what I would wake up to. Was this mass benign? Malignant? Had it spread? When I woke up from surgery I saw my doctor and my husband, who both had smiles, and so I thought maybe it’s OK. That’s when I found out it was cancer. It was a rare form of ovarian cancer. But what I focused on was they had caught it early, which for those who are familiar with ovarian cancer we know that doesn’t happen often enough. We turned our sights to recovery at that point. It wasn’t until a couple weeks later that we found out it was a higher-grade malignancy than they originally thought and now I would have to go through an aggressive chemotherapy regimen called BEP (bleomycin, etoposide and cisplatin) and that would give me the best chance of non-recurrence. 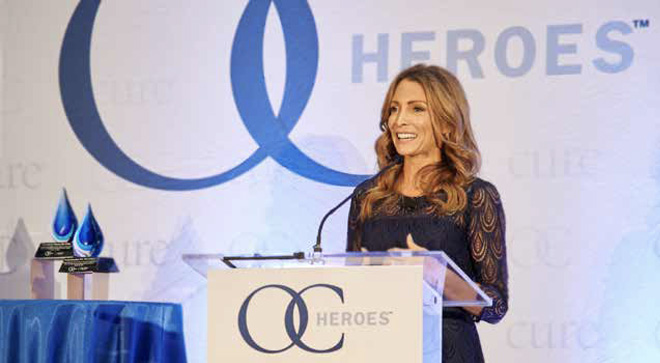 SHANNON MILLER was the keynote speaker at the Ovarian Cancer™ Heroes event held in Honolulu, Hawaii, on March 15, 2019.

What types of side effects did you experience?
Cancer treatment is not easy by any stretch of the imagination. There are so many questions and so few answers. I learned about the treatment and I think reverted to some of that competitive mentality. “OK, I’ve got a goal. I don’t know exactly where I’m going to end up, but I know what the plan is, and I know what I can get up and do every day.” And part of that was chemotherapy.

I went in with that mental attitude, but it was tough. That first week I was back in the hospital. I couldn’t keep down food or water. I went through 10 or 11 nausea medications and not even one of them phased me. I think the nausea for me was the biggest difficulty. Certainly, losing my hair was tough. I think that’s tough for all of us. It is to some degree losing your identity because it’s not just your hair, it’s your eyelashes and eyebrows. I remember looking in the mirror and seeing this very pale face looking back and I had to constantly remind myself that this is not a symbol of my sickness. This is a symbol that I am doing everything that I can to get and remain healthy.

Other than that, the neuropathy in my hands which I still tend to deal with today. Chemo brain — not being able to find words at a certain time and when my job is finding words, speaking in front of people, commentary and analysis, which means I have to have a great deal of information. But I’ll take it. I’m here, and I get to get up each day.

Did you suffer from any emotional side effects?
(Cancer) is a very scary experience. It tries you in many different ways. As a young mom, you’re already scared of everything. And so, to add a cancer diagnosis on top of that and wonder if my son is going to have a mother. And then beyond that, “when” I get through this, what will be the ramifications for him? You come face to face with your own mortality and I had really never thought about that before.

Your mother is also a cancer survivor. Can you discuss that and any advice she gave you?
My mother was diagnosed in 2008 with cervical cancer. It was shocking to all of us in the family. It was my first real glimpse into what someone faces before, during and after a diagnosis that is so life-altering. Here’s my mom — and mom is invincible, I mean mom is just supposed to be there — and at that point it was just terrifying to think that we could lose her.

I remember calling her on my last day of chemotherapy. I thought it would be better than what I felt. I still just felt the same. I was so sick and so tired, and nothing had changed. And she said look, “Let’s talk about other things today. And I want you to call me back in two weeks and then we will talk about how you’re feeling. You have to understand that this is not going to happen overnight. It is a process and you just have to take it one day at a time. You did not win an Olympic medal in a day. It took you 10 years to get there.” Two weeks later I called her, and I said “Mom, I don’t feel great, but I feel better. I think it’s going to be OK.”

Has your perspective changed after cancer?
I learned a lot through my cancer experience. I’m still learning. I feel like I am still on my journey. But I think the silver lining — I’m one of those (people) who always tries to find the silver lining — is I try to find the blessing in every experience. Even the most difficult ones. The blessing that I have received is just a reminder to stop and smell the roses. I have lived my life so fast-paced I was never one to dwell on difficulties, but I also wasn’t one to dwell on successes. I just try to enjoy every moment as much as possible.

Listen to the CURE® Talks Cancer Shannon Miller podcast here.
Be the first to discuss this article on CURE's forum. >>
Talk about this article with other patients, caregivers, and advocates in the Ovarian Cancer CURE discussion group.