Katie Couric reflects on life and lessons learned after losing her husband to cancer.
BY Katie Kosko
PUBLISHED August 13, 2019
Katie Couric has held many titles — news anchor, wife, sister, mother. But her role as caregiver-turned-advocate more than two decades ago became a new challenge that’s left a lasting impact.

Her first husband, Jay, died of colorectal cancer just nine months after learning he had the disease, and Couric found herself trying to pick up the pieces for her two young daughters. A few years later, she faced the same nightmare — this time with her sister Emily, who was diagnosed with and died of pancreatic cancer.

Since then Couric has worked to help fund research for cutting-edge treatments and raise awareness about all cancers. In an interview with Heal®, she opens up about her losses, a new cancer initiative and the advice she would give her younger self.

Heal®: How did you cope with the deaths of your first husband and your sister? What was that like for you?
Couric: When both my husband Jay and sister Emily died of cancer, it was devastating for our families. Jay passed away first from colorectal cancer. Our daughters were 6 and 2 at the time, and it’s really hard to describe the kind of heartbreak that ensued after he passed away. Our hopes and dreams, what I thought was going to be a long and happy life together, just vanished into thin air after his nine-month battle. And it was a shock when my sister called me just a couple of years later, and said, “I have pancreatic cancer, and it’s spread to all over my liver.” I think that it’s hard to describe for people what it’s like unless you’ve been there, and you have to rebuild your life. Thomas Jefferson once said that the earth is for the living and we’re all terminal. So I wanted to try to have a full and happy life, even if it meant doing so without my husband. I had two little girls who were depending on me. I didn’t have the luxury or the time to put the covers over my head and give up. I think people find a way to go on because they have to go on. They have no choice but to go on. 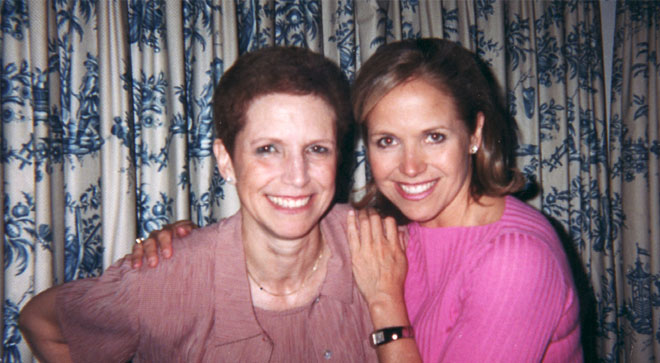 Emily and Katie Couric grew up in Virginia. Katie gave the eulogy following Emily’s death from pancreatic cancer at age 54.

As you mentioned, your daughters were both very young. How was the discussion with them? Have you had discus­sions about cancer with them now as adults?
I did a lot of reading about how talk to your children about cancer, and, according to everything I read, it was important to be honest and to not guarantee that everything was going to be OK. I remember Ellie asking me, “Is Daddy going to be OK?” and I said, “Gee, honey. I really hope so. The doctors and nurses are trying so hard to help him, and he’s trying so hard to get better.” I just didn’t want to raise expectations that he was going to get through this when the prognosis was so bleak at the time he was diagnosed.

I was really focused on making sure that my daughters got through this horrific ordeal as healthy and whole as possible. So I called CancerCare, an organization that really helps cancer patients, and I remember saying, “I need some advice. I need some help.” And they told me that kids that age don’t want to feel different from other kids when they’re young. Someone from CancerCare came to Ellie’s first grade class, and they did an exercise called the Worry Cup. They put a cup in the middle of the room, and they all sat in a circle. They had those big, fake gemstones, and everybody took turns putting a gemstone in the cup and saying what they were worried about. Her teacher later told me it was the most profound experience she had ever had in her class­room. Of course, Ellie said she was worried about her dad. I think it was designed to make sure Ellie knew she wasn’t the only person who was worried about something.

After Jay died, I made sure Ellie went and talked with someone. I think because she was so young, it meant mostly playing games and role-playing. I don’t think it was tradi­tional therapy. But I don’t think anyone ever regrets going to get help. They regret not going to get help. I wish I had done more for Carrie when she had turned an age where she could understand a little bit more. But Jay had died several years before, so I think you take cues from your kids and get professional help. But talking to them and keeping their dad’s memory alive was important to me. Now they are 27 and 23, and I think they worry about cancer, and I’m going to make sure they get the proper screening they need, given our family history. 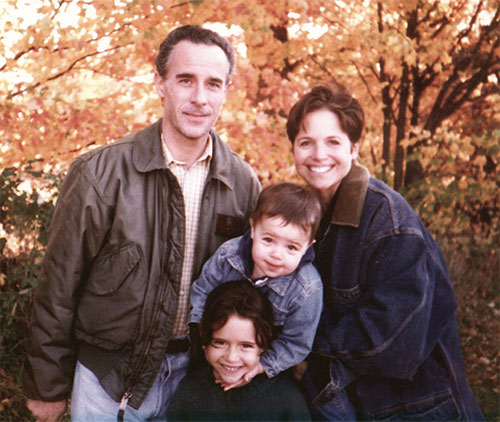 Katie Couric with her first husband, Jay, and their daughters, Carrie and Ellie.

What was the most challenging part of being a caregiver? Were there any rewarding moments?
It’s incredibly challenging, difficult, painful and traumatic to see someone you love get sicker and sicker. Every day was a challenge. I felt like I had a vise around my heart every single day. It started to affect me physically. I had a lot of pain in my back. I didn’t sleep well. I ended up going to a therapist, and I was prescribed antidepressants for situational depression, which is brought on by some kind of traumatic incident.

I guess the positive is — and I don’t know if there is a positive, honestly — that your sense of being present is heightened and every moment seems so important. You almost form a mental snapshot in your mind when you spend your days together, whether it’s playing with your kids, going to the garden, taking walks, driving or listening to music — everything seems to take on more importance and significance, which I think is a good message for all of us when we’re not sick.

We often talk about the new normal for patients. Is there a new normal for a caregiver?
The new normal while Jay was sick was that my entire focus was on him. I remember I was still on the “Today” show, and those two hours just felt like such a helpful escape because those were two hours in the day where I wasn’t focused on him, how he was doing, if he was going to get better, were there more treatments I didn’t know about, was there a clinical trial going on that he could enroll in. It was just all-encompassing and overwhelming. But that’s OK because that’s how I wanted it to be.
Be the first to discuss this article on CURE's forum. >>
Talk about this article with other patients, caregivers, and advocates in the Colorectal Cancer CURE discussion group.