Expert Looks Ahead in the Treatment of MPNs

While new and emerging therapies have the potential to change the treatment landscape for myeloproliferative disorders such as as chronic myeloid leukemia (CML), polycythemia vera (PV), Michael J. Mauro, M.D., stated that researchers in the field still have a significant amount of work ahead of them.

“It's still a battle for patients,” said Mauro. “They still have long journeys, side effect management, a lot of decision making with multiple medications and new drugs on the horizon. However, this is a very good ending to what was really the breaking story of targeted therapy in cancer.”

What are some of the pivotal studies for CML?

In an interview during the meeting, Mauro, a hematologist and leader of the Myeloproliferative Neoplasms Program at Memorial Sloan Kettering Cancer Center, discusses the major questions regarding the current state of CML, as well as explorative options for patients with PV and myelofibrosis.The EURO-SKI trial looked at the success of treatment-free remission in a very large number of patients — over 700 — from Europe. Part of the most innovative findings was learning patients need to be on TKI or in deep remission for about 5.8 years for it to be the most successful. That was the dividing line where success was higher versus lower.

What do you imagine the landscape of CML looking like in five to 10 years?

What are the optimal ways of managing some of these side effects?

What is important to highlight regarding myeloproliferative neoplasms (MPNs)?

We are starting to shape the picture of what a patient with CML might need to look like before they can think about treatment-free remission, from the EURO-SKI trial.For myeloproliferative disorders — CML specifically — we're getting better and better targeted therapies. We're really coming “full circle” in that we're not only putting a high fraction of patients in remission without what people consider conventional chemotherapy, but we are really talking about a functional cure, which plenty of people didn't think was possible. That is great news.Decision making for patients with CML takes some thought and finesse. First, TKI therapy is based on patients' profiles and perhaps their comorbidities. Comorbidities play an important role in CML. They may have more of an impact than CML responses shown in a recent paper by Germans in the Journal of Clinical Oncology. The side effect management encompasses knowing what a patient's comorbidities are and thinking TKI may be best for them. When you're looking at resistant disease, you're obviously going to think a little bit differently about comorbidities. However, they need to be managed. The most important breaking story is likely cardiovascular or vascular risk. Patients need to have a good base on cardiovascular assessment, like they should have in primary care—or maybe at the direction of the oncologist to see a specialist to know what their comorbidity really is. They need to manage that as they navigate through TKI therapy, as well as drugs with vascular risk. Here, we are a little further behind CML. However, we are really making nice progress. One important thing in 2016 was the update of the World Health Organization's (WHO) definitions of MPNs. What used to be called masked polycythemia vera (mPV) is now identified, which means we've lowered the bar and recognized patients with PV. Patients who have lower but still elevated hemoglobin levels may have PV and should be evaluated and diagnosed as such.

We've recognized a prefibrotic form of myelofibrosis, which was always tough to separate from thrombocytosis or overt myelofibrosis. It's now a category in WHO. We've received some nice clarification of what were the trickier forms of MPNs to diagnose.

We've also seen the first appearance of guidelines for MPNs from the NCCN. We don't have the full set of treatment guidelines. What we have now for myelofibrosis is some direction on how to treat our patients based on their risk. There was an important notification that patients should have their symptoms assessed by a symptom-assessment scale—a tool that's been validated and published. We shouldn't forget about autologous transplant with such patients.

When we think about therapeutics, there have been some big questions in the field and thinking about PV and thrombocytosis for ET. There is a large trial that has accrued and is asking this question for high-risk patients without previous therapy: is interferon versus hydroxyurea—which tends to be the standard—more effective? What's the real benefit? It’s too early to say.

At the 2016 ASH Annual Meeting, through the MPN consortium, we saw a presentation of this important study that is showing pretty equal results with regards to hematologic response, bone marrow and molecular response. The thinking is that you will probably need to wait a little longer to see that data mature to fully assess it.

Also at the meeting, with regard to myelofibrosis, we've had Jakafi (ruxolitinib) approved for many years and have been looking for competition. Can there be a different JAK inhibitor that could offset some of the anemia we see with Jakafi? What about patients with low platelets? They're hard to treat. There are updated data from studies of pacritinib, which is a JAK inhibitor, with the possibility to be useful in patients with low platelets.

Who are the most appropriate patients to receive Jakafi?

Can you speak to Jakafi's role in PV?

Not presented at ASH, but in the background, is updated data on momelotinib, another JAK inhibitor with a probable ability to offset anemia. Some of its trials showed that it could hold its ground and offer some of the similar benefits of Jakafi, but not as complete as we thought. We are soon going to have alternative JAK inhibitors that allow us to treat patients with more difficult blood count imbalances.It's important to identify the patient that can benefit from JAK inhibitor therapy. It's going to be the patient with symptoms and high-risk disease. The main benefits of Jakafi are going to be spleen size reduction and symptom management. These patients, by default, are often some of the higher-risk patients, particularly with enlarged spleens. It's remarkable to see the symptom control and the improvement in quality of life. Even the improvement in survival is probably due to global reduction of complications such as thrombosis and comorbid complications from the burden of advanced myelofibrosis. Jakafi has been approved for PV for a while now. It probably stands on the middle ground as the drug we would think of after some initial therapy—whether or not it's hydroxyurea. I mentioned that interferon and hydroxyurea are battling for first place in the higher-risk PV patient. Jakafi offers the ability to render someone's phlebotomy independent and show spleen size reduction and good symptom improvement, similar to how we see it in myelofibrosis. It's an improved drug for the patient who doesn't respond to hydroxyurea. 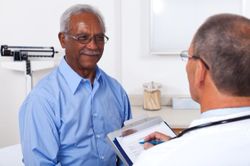