After beating stomach cancer, a grandmother transformed herself into a competitive amateur athlete to stay active and healthy.
BY Debbie's Dream Foundation
PUBLISHED January 27, 2020
When Angela was diagnosed with adenocarcinoma of the stomach in January 2007, she was shocked. She was a typical grandmother with no family history of stomach cancer and no other risk factors except for H. Pylori. Angela had difficult choices with her treatment options. After having 70% of her stomach removed, followed by four rounds of chemotherapy and radiation, she now suffers from gastroparesis (delayed emptying of the stomach) caused by the treatments, but she is extremely fortunate that cancer has not returned.

Her recovery, though, was not just about surviving cancer. She was determined not just to beat cancer, but to change her lifestyle and become as healthy and strong as she could be. When people advised her, she should rest, she did the opposite. She got up and moved. She exercised and was determined to live her life to the fullest, no matter how bad she felt. 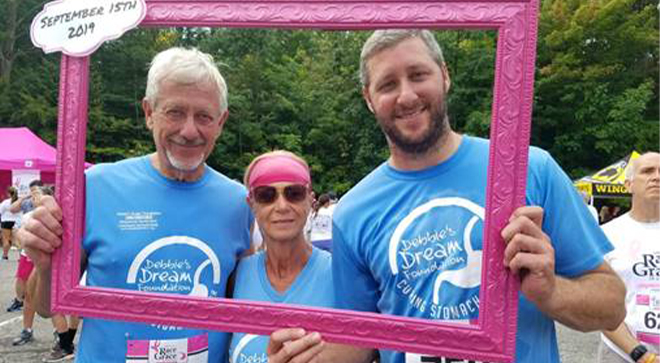 After Angela was feeling somewhat better, she began to walk with a wonderful friend. She had walked before her cancer, but this with different. They walked fast and long, no matter what the weather. The distance kept increasing until they were walking 8 miles every morning. Tragically, her friend passed away a few years later.

Although Angela had never been athletic or played any sport, at the age of 59, she became a runner. Numerous 5K’s, 10K’s, and half marathons, along with a full marathon. It changed her life. Angela has now run hundreds of races, usually winning or finishing near the top of her age group. She trains like a professional athlete, logging 30-40 miles of training runs per week, even in the snow and rain. Although some of the training runs are with her husband, most of the time, she is running alone. The peace and tranquility of a long run in the morning, enjoying the fresh air and working up a healthy sweat is therapeutic.

Angela trains and competes despite the gastroparesis. Most runners begin eating large meals (carbohydrate loading) a couple of days before a long race. With the small remaining portion of her stomach and the gastroparesis and other digestive issues, that would be out of the question for her, as she can barely eat small meals. It even limits the amount of water she can drink during a race.

Most people her age, even those without cancer who were active when they were younger, become sedentary. Based on her accomplishments, she was selected to be an Akron 60 Strong representative, a program sponsored by the Pioneer Physicians Group to encourage Northeast Ohio seniors to be active. She wants to inspire seniors and those with cancer and other health issues.  Her message is to live your life to the fullest and don’t give up.

Angela was a non-athletic grandmother who never dreamed that she could become an athlete.  Despite having only 30% of her stomach, gastroparesis, and other digestive problems, she became a Bad A** Grandma Runner.  So can you.


Angela Bosela is a member of Debbie’s Dream Foundation: Curing Stomach Cancer (DDF), who, along with her husband Paul and daughter Sheila Gambaccini, co-founded the Ohio Chapter and serve as mentors in the Patient Resource Education (PREP) Program. Learn more about Angela and DDF at www.DebbiesDream.org.
Be the first to discuss this article on CURE's forum. >>
Talk about this article with other patients, caregivers, and advocates in the Gastric Cancer CURE discussion group.