Hall of Fame quarterback Jim Kelly met with CURE to talk about his cancer experience.
BY Mathew Shanley
PUBLISHED August 25, 2017 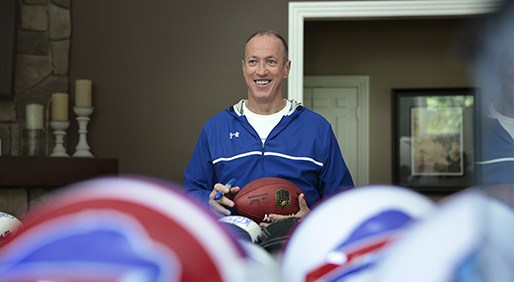 Jim Kelly - PHOTO BY Ben Norman
In a dark, empty office building a few yards from his foundation’s headquarters, Hall of Fame quarterback Jim Kelly scrambles to make sure he’s wearing his wedding ring. He won’t do an interview without it.

Of all the labels that have been applied to the remarkable Buffalo Bills all-time leading passer over the years, the one that fits him best seems to be “family man.” In an hour-long meeting that was intended to focus on his own cancer journey, Kelly kept turning the conversation to his brothers, and his wife and his two daughters.

“For me, I know that all the things I’ve been through – good and bad – I’ve always had a very good team around me, whether it’s been in sports or in life. In the game of life, it’s been my five brothers, my mother and father, and, of course, my wife and two kids,” Kelly said.

Kelly is hardly the only person to have played professional football, and there have certainly been other cancer patients. He’ll be the first one to tell you, though, that nobody has a story quite like his.

Fans of his sport watched the quarterback’s transformations from afar, as he evolved from a college football Heisman Trophy contender in 1982 to a father who would eventually lose his son to a rare disease in 1997, to a Pro Football Hall of Fame Inductee in 2002, and then to a patient of squamous cell carcinoma in 2013 and again in 2014.

Kelly retired from professional football at the end of the 1996 NFL season. While a sense of sadness at the thought of no longer competing in the game that he loved could have consumed him, it didn’t even have the chance. Two weeks after his announcement, he learned that he would have a son, a boy he and his wife Jill would name Hunter.

Hunter would pass away at the age of 7 from a rare genetic disease called Krabbe leukodystrophy, in which mutations in the GALC gene result in progressive damage to the nervous system. Kelly would respond by founding Hunter’s Hope, a non-profit organization committed to raising awareness, research, and family care for people with Krabbe and other leukodystrophies.

“I think it was all preparing me for what I’m doing now, and that’s going and making a difference – to never give up. To make sure that you don’t treat your (loved one) like they’re dying. To treat them like they’re alive.” In 2013, Kelly was diagnosed with squamous cell carcinoma. It took a complete removal of his upper jaw before he was declared cancer-free. Even after that, his hardest days were still ahead of him: The cancer recurred a year later, and he had to prepare himself for chemotherapy.

“The second time, in 2014, it was ‘OK, here comes the radiation. Here comes the chemo. Here come the tough parts.’ I was tested every single day. I didn’t know what to expect. When you hear ‘chemo,’ you automatically think throwing up and not feeling good. It came true – all those things just hit me hard. But, you know what? I know where I am now, and now I get it.”

Clearly, Kelly’s family kept him grounded as he struggled through the rough times, leaving him believing he was tougher than anything that came at him. He calls that “Kelly tough.”

Now, Kelly is the keynote speaker at the Chemotherapy Foundation Symposium (CFS) Innovative Cancer Therapy for Tomorrow Conference – run by Physicians’ Education Resource, a sister company to CURE. There he will share the steps from his speech titled “A Journey of Perseverance,” and oncologists in attendance can rest assured that they’ll hear all about the people who accompanied him along the way: his five brothers, his wife and his two daughters.

In his conversation with CURE, Kelly stressed the importance of his family and the way that those close to him approached his two battles with cancer.

“My wife and my two daughters, not once did they ever walk into my hospital room with frowns on their faces,” Kelly said. “They walked in with the attitude that they were going to make my day better with their presence, their attitude, what they did, what they said and the smiles on their faces.”

Being Surrounded by a Good Team -- Jim Kelly's Family

To Kelly, though, his team is much more than just the men in cleats who stood beside him on the gridiron. The team he talks about most consists of his family, nurses, oncologists, and yes – even some names familiar to the common football enthusiast. Now 57, he draws strength from his “Four F’s” – Faith, Family, Friends, and Fans.

A cancer diagnosis can be daunting. The repercussions of it and thoughts of “what comes next” can consume the mind. Kelly remembers feeling particularly troubled once he realized that he was going to have to tell his family – his teammates – of his new normal.

“Well, any time you hear that you have the word ‘cancer,’ it scares you,” Kelly said. “When I was first diagnosed, I remember driving away and pulling off the road and I broke down. I didn’t break down because I had cancer, I broke down because ‘How am I going to tell my wife?’ and ‘How am I going to tell my two daughters that already saw what my son went through, and are going to have to go through something again?’ It was going to be hard for me to tell them.”

Never, though, according to Kelly, did any of them say that they felt burdened.

Shortly after his diagnosis, his wife, Jill, requested that they go public. At first, he disagreed, dreading the prospect of members of the media and football fanatics getting  involved in his personal life. Eventually, he conceded to his partner’s wish.

“‘Jim,’” he remembers her pleading, “‘if there’s ever a time that we need people to be praying for you, it’s now. We cannot hold back. We cannot wait.’”

Ultimately, he agreed and told the world about his cancer.

What followed was an outpouring of support and well-wishes. Kelly recalls hospital visits from his closest friends on the Bills teams that won four straight American Football Conference (AFC) Championships, including fellow Hall of Famers running back Thurman Thomas and defensive end Bruce Smith. The two would compete to see who could give their captain a bigger, better puzzle, and then sit alongside his hospital bed to complete it with him. Every day he’d receive “get well” cards from fans of rival teams, including those of the Dallas Cowboys and Miami Dolphins.

Faith, family, friends, and fans; each of Kelly’s “Four F’s” played a part on his road to recovery; his “journey of perseverance.”

In his football career, Kelly was the victor of many highs and the victim of many lows.

He was recruited to play football by Penn State University, his favorite team in childhood. Soon after, Head Coach Joe Paterno asked him to play linebacker instead of his preferred position of quarterback. So he decided to accept a scholarship to the University of Miami, where he played well enough to become a leading candidate for the Heisman Trophy, the collegiate level’s greatest individual honor. During his senior campaign, he blew out his shoulder. Many thought his career was over.

In the 1983 NFL Draft, Kelly was projected as a first-round pick; he was selected 14th overall by the Buffalo Bills, a team he didn’t want to play for in a city he didn’t want to live in. With the Bills in the early 1990s, Kelly led his team to four consecutive Super Bowls; he lost them all.

To say that Jim Kelly’s career has been riddled with disappointment would seem like a slight to the average person; one who has never stepped under center at the Super Bowl even once, let alone in four consecutive seasons. His life, though, has been a constant overpowering of obstacles. It has been filled with trials and tribulations – some pertaining to football, and others not, but each faced with an consistent air of optimism and a determination to conquer it.

Those peaks and valleys, though, helped prepare Kelly for what was to come in his post-playing days – his second life.

“I’ve been through so much in my life,” Kelly says. “I’ve been at the top of the mountain, and I’ve been to rock bottom. The thing is: I want people to understand that they can be a difference-maker. It’s not always about the individual that’s going through the hard times. It’s the people that he or she surrounds him- or herself with.”

Approaching cancer patients can be a tricky subject. On Facebook, CURE recently asked people with cancer about some of the most insensitive things that had been said to them. Among the responses, people commented that they had been told that they had “the good kind of cancer” and asked if they “knew their expiration date.”

“For me, it’s not always what you say; it’s how you say it. It’s stressing the fight that you have and never giving up. The words of wisdom that oncologists can give to patients is huge, and I am so blessed to have the ones that I have in Buffalo and in New York City. With my doctors, it’s just how they relay it to you, how they tell it to you is so important. For me, the oncologists play a very, very key role in the success, and the fight that somebody has in their heart.”

For somebody who isn’t a cancer patient, it can be difficult to understand the impact of simple words. It was easy, however, when it came time for one of the members of Kelly’s team to decide whether to share a piece of information he had been given from the lead oncologist.

When Kelly’s cancer recurred in 2016, his brother was told that the five-time Pro Bowler had a 10 percent chance of living. He kept that information to himself. “He saw the fight that I had ahead of me, and that my family had ahead of them. He didn’t want anybody to know, and look where I’m at today.”

“Nothing scares me anymore. If the good Lord decides tomorrow is my day, there’s one guy that’s going out fighting, but I’m going out with a smile on my face, because I’ve lived a life that certain people would love to have,” Kelly said.

“The negatives are going hit you in your mind, but are you going to learn from them, then move on and make something better? I look back on my life, and I know why my story is called a ‘Journey of Perseverance’ – It’s because you have to persevere through tough, tough times. I’m a blessed man. I have nothing to complain about.”
Be the first to discuss this article on CURE's forum. >>
Talk about this article with other patients, caregivers, and advocates in the Prostate Cancer CURE discussion group.