The Role of Genetic Testing in Ovarian Cancer

Future treatment of ovarian cancer will include more interaction between molecular pathology and clinical pathology where genetic information can lead to more accurate pathologic diagnosis.
BY Danielle Bucco
PUBLISHED August 08, 2017
Pathologists and oncologists work closely together to treat patients with cancer, and will continue to do so as more individualized treatments become popular. In ovarian cancer, tumors evolve over time, making this relationship between members of the treatment team even more important.

The early identification of BRCA genetic mutations can significantly help inform future treatment choices for patients with ovarian cancer. There is no routine testing for BRCA mutations in endometrial cancer, but physicians can screen for Lynch syndrome, which can be related to germline mutations.

Going forward, genetic testing will be more likely to include both molecular pathology and clinical pathology to reach a more accurate pathologic diagnosis, according to Douglas A. Levine, M.D., a professor in the Department of Obstetrics and Gynecology, Director, Division of Gynecologic Oncology, NYU Langone Medical Center.

"All ovarian cancers, endometrial cancers, lung cancers, and other types of cancers are each specific subtypes of cancer that have a specific genetic makeup, receive specific treatments, and now have different prognoses," Levine said.

In an interview with CURE, Levine discusses the role of pathology in ovarian and endometrial cancer, and highlights when a patient should be tested for BRCA mutations.


Can you give an overview of your presentation from the recent Congress of Oncology Pathology meeting? 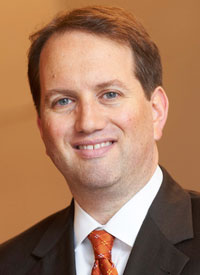 Douglas A. Levine, MD
I talked about the interaction between oncologists and pathologists. I also talked about homologous recombination DNA repair defects in ovarian cancer, how that leads to poly (ADP-ribose) polymerase (PARP) inhibition therapy, and the various recently approved FDA indications for PARP treatment. Additionally, I discussed microsatellite instability in endometrial cancer and how that has led to recent FDA approval of checkpoint blockade immune-oncology treatments.

Can you discuss how pathology, tissue sampling and repeat biopsies factor into ovarian and endometrial cancers?

Pathologists and oncologists work closely together to treat cancer patients. In ovarian and endometrial cancer, the tumor can evolve over time, mostly due to prior treatments. This is particularly the case with ovarian cancer based on what chemotherapy agents have been given. One of the important factors regarding tumor evolution is if the tumor has BRCA germline or somatic mutations since secondary mutations can develop over the course of treatment. Those secondary mutations can make a treatment-sensitive tumor become treatment-resistant.

Is the role of pathology in ovarian and endometrial cancer different from other cancers?

It's important to get the right pathologic diagnosis. On the other hand, it is very difficult for pathologists to diagnosis high-grade tumors. As time goes on, we'll see an interaction between molecular pathology and clinical pathology where the genetic testing and the genomic information can lead to more accurate pathologic diagnosis. In some cases, it's indicated as being very important whereas in others it's a waste of money.

How can you determine which cases are important and which would be a waste of money?

That is where individual studies, academic studies and national studies can show the benefits and determine where this is important. We know for BRCA-associated ovarian cancer, genetics is very important. Pathology can lead you to suspect that a patient has a BRCA-mutated tumor but you can't diagnose it without genetics, and that is going to affect treatment.

On the other hand, microsatellite instability testing can be done at a pathology laboratory with the immunohistochemistry. In some cases, you need to augment that with germline genetics. Depending on the situation, with some difficult to diagnosis tumors, such as high-grade endometrial cancers, it can be hard to determine whether it is endometrioid or serous. A panel of protein markers can help to distinguish this and we've known that for a long time. You don't always need genetics to make that diagnosis.

At what stage should patients with ovarian and endometrial cancer be tested for BRCA1/2 mutations?

Every newly-diagnosed patient with ovarian cancer should undergo genetic testing for BRCA1/2 mutations.

We don't do routine testing in endometrial cancer for BRCA1/2, however we do screening for Lynch syndrome, which can sometimes be related to germline mutations in other types of DNA mismatched repair genes. We start with testing the tumor as a screening test and then a subset of patients who have abnormal protein screening tests with immunohistochemistry will then go on to have germline testing to determine if they carry an inherited mutation, and then mismatch repair gene. We're not doing too much BRCA testing for endometrial cancers at present.

The data that suggests the link between uterine cancer and BRCA mutations is very weak. There are a few papers that have suggested such a link, but most are based on a very small handful of studies. If there is an association between BRCA mutations and endometrial cancer, it's probably very small.


Is there a difference in treatment recommendations for germline versus somatic BRCA mutations?

Is there anything from your presentation that you want to specifically highlight?

With the recent FDA approval of multiple PARP inhibitors, some indicated for women who have BRCA mutations and some indicated for any patient with ovarian cancer, it becomes slightly more controversial to know when to do genetic testing and when to administer a PARP inhibitor. PARP inhibitors are approved for the maintenance setting but they also carry toxicity, making it important to have a careful discussion between a doctor and patient to determine the risks and benefits of using a PARP inhibitor in the maintenance or remission setting, or when the tumor has recurred and is being used for active treatment.
Be the first to discuss this article on CURE's forum. >>
Talk about this article with other patients, caregivers, and advocates in the Ovarian Cancer CURE discussion group.