Patients who can’t afford their cancer medications may be able to get the drugs for free, or at a reduced cost, from the pharmaceutical companies that make them.
BY Andrew Smith
PUBLISHED November 18, 2016 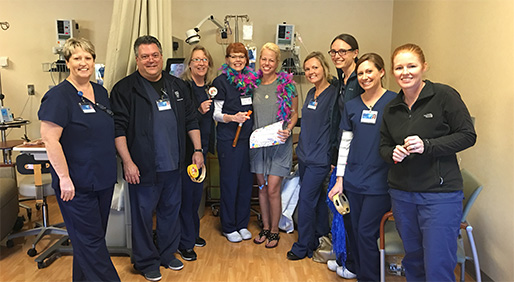 ELIZABETH celebrating her last Herceptin treatment with her healthcare team - PHOTO COURTESY OF GENENTECH
It took less than six weeks for the pea-sized lump in Elizabeth’s breast to grow larger than a golf ball. The biopsy showed stage 3b invasive ductal carcinoma. Luckily, specialists at The Mayo Clinic’s Phoenix campus said that a cutting-edge treatment regimen with two targeted medications could potentially eliminate the cancer. There was just one problem with the plan: Money.

Elizabeth, who asked that her last name be withheld to protect her family’s privacy, had no insurance. Her family’s income and savings were enough to finance therapy solely with the chemotherapy Abraxane (paclitaxel), which cost $1,400 per treatment at Mayo. But when testing at the institution showed her cancer to be HER2-positive, her doctor wanted to supplement the chemotherapy with Herceptin (trastuzumab) and Perjeta (pertuzumab), targeted drugs that can significantly improve survival in this subtype of cancer. That increased the bill to $45,000 per treatment.

The family took out a second mortgage, but even that would not cover the bills. Financial ruin seemed inevitable, until Elizabeth noticed a link on the main page of the Perjeta website.

“It said ‘Financial assistance for those who qualify,’” recalls Elizabeth. “I clicked the link, read the rules and saw that we qualified. I quickly filled out the patient forms. Mayo took a bit longer to fill out the provider forms. The whole thing took about three weeks, and then I got the call from Genentech saying that I was in. The company would cover my Herceptin and Perjeta. I wanted to hug the guy over the phone.”

Genentech isn’t the only pharmaceutical company that runs a prescription assistance program. Nearly all of them provide very expensive medications at little or no cost to qualifying patients who apply for help.

Programs vary considerably from one company to the next, but those that give medications away typically ask applicants to swear that they have little or no prescription drug coverage and then to demonstrate that they have limited financial resources, often through the submission of tax documents. They also must provide documentation proving their legal residence in the U.S.

It is harder to generalize about income thresholds. Some programs use multiples of the federal poverty guideline, which is currently $24,300 for a four-person household. Historically, the most common cutoff has probably been twice the federal guideline, but as treatment costs have risen, income thresholds have often followed. The Lilly Cares Oncology program has a household income threshold of $121,500 for a patient in a family of four with no insurance or insurance that doesn’t cover a prescribed Lilly drug. Other programs, such as the one run by Abbvie, have different maximum incomes for different medications; the more expensive the medication, the greater the maximum income for program participants.

Patients at the other end of the income spectrum — those who are poor enough to qualify for Medicaid or public assistance from their state or city — generally do not qualify for free medication. Pharmaceutical companies typically expect them to take all of the government help they can get and use those programs to finance their medications. They can, however, sometimes qualify for help with any copays those programs ask them to pay.

The moral is simple: If drug costs are putting a serious squeeze on your finances, it pays to see if you qualify for help.

Patients who can show that they meet the insurance, income and residency requirements for pharmaceutical assistance programs will generally need their health care providers to fill out forms designed to show that they qualify medically. In most cases, the relevant documents can be filled out by physicians, nurses or patient advocates, but again, the requirements vary from program to program.

Procedures for filling out such forms also vary from practice to practice. Large oncology practices that treat many underinsured patients often have financial counselors who are experts at securing financial assistance. Good financial counselors will often alert patients that they qualify for assistance rather than waiting for patients to come to them. At other practices, however, a patient will have to print out the relevant forms, request that they be filled out and then keep asking until the practice sends in correctly completed forms.

Even after patients are accepted into a program, they often have to apply for readmission every year or so. Fortunately, the readmission process tends to be simpler than the initial application. In most cases, patients and their doctors only have to affirm that nothing has changed regarding finances, insurance or need for treatment. If something does change, even in the middle of the year, patients are typically obligated to provide immediate notification: Assistance predicated on no insurance stops when you land a job with great insurance.

Pharmaceutical assistance programs rarely come up when the popular press writes about drug costs and coverage, but they play a surprisingly large role in the nation’s health care system. Millions of uninsured Americans and millions more insured Americans receive some aid from the pharmaceutical industry in any given year.

“What’s more, our financial and product donations to the Johnson & Johnson Patient Assistance Foundation enabled it to provide medicines to approximately 100,000 U.S. patients without adequate financial resources and prescription coverage in 2015. We also make financial donations to charitable foundations that assist patients in financial need with medication-related copayments.”

And those figures are just from the Janssen division of Johnson & Johnson.

In all, nearly 200 different pharmaceutical companies offer price assistance programs. Together, those programs have helped more than 10 million American patients since 2005, when the pharmaceutical industry created the Partnership for Prescription Assistance to serve as a clearinghouse that would track all those programs and direct patients to them. “We try to make it easy for patients to find all the help they’re eligible to get,” says Caitlin Carroll, director of communications for PhRMA, a trade group that represents nearly all of the nation’s large pharmaceutical and biotech companies. “All they have to do is give the system some basic information about insurance, income and the drugs they take. The system compares that information to the criteria for each program, which we update monthly, and tells users which programs they may qualify for.”

In some cases, such programs merely lessen the financial burden of treatments that patients would have undergone without such help. In other cases, particularly those involving very expensive new medications, patients simply could not afford recommended treatments without them.

The cost of cancer care varies from treatment to treatment, with much depending on the stage and subtype of the cancer. Retail prices hinge on a wide range of factors: the cost of making the treatment (biological drugs tending to be much more expensive), the efficacy of the treatment compared with other treatments, demand, and, most importantly, whether patents still protect it from generic competition.

The prices for cancer treatment become frightening for nearly everyone when doctors prescribe the most expensive medications. Retail costs for the prostate cancer drug Xofigo (radium-223 dichloride), the stomach cancer drug Cyramza (ramucirumab), the lung cancer drug Zykadia (ceritinib) and the thyroid cancer drug Lenvima (lenvatinib) all top $12,000 per month.

The new immunotherapy medications that are approved for some cancer types and may eventually be approved for more are equally expensive. Keytruda (pembrolizumab), Opdivo (nivolumab) and Tecentriq (atezolizumab) also retail for more than $12,000 a month. A full course of treatment with Yervoy (ipilimumab) is just four infusions, but it costs more than $100,000.

Some criticize pharmaceutical companies for charging so much. Pharmaceutical companies typically respond to such complaints by pointing out that it costs, on average, more than $2 billion to develop a new drug. Whatever individual patients feel about the merits of those arguments, the fact is that prices are unlikely to drop anytime soon. Given that prices are what they are, price assistance programs serve a valuable purpose: They let patients access expensive medications without bankrupting themselves.

And in some cases, those medicines can produce miracles.

Elizabeth, the breast cancer patient who was treated at Mayo, is not sure she would have survived this long had she been treated with chemotherapy alone. The addition of Herceptin and Perjeta to her regimen spurred dramatic shrinkage in her tumor, from 10 centimeters at diagnosis to 4 millimeters when a surgeon removed it. The treatment also killed 99 percent of the cells that remained in the shrunken mass, while eliminating all trace of cancer in her lymph nodes.

Her doctors have not only declared her to be cancer-free, but also told her she is far less likely than most patients with breast cancer to suffer a recurrence.

“These medications saved my life,” she says. “They have given me the chance to watch my son grow up and to grow old with my husband and to experience everything else that cancer would have taken away from me.”
Be the first to discuss this article on CURE's forum. >>
Talk about this article with other patients, caregivers, and advocates in the General Discussions CURE discussion group.