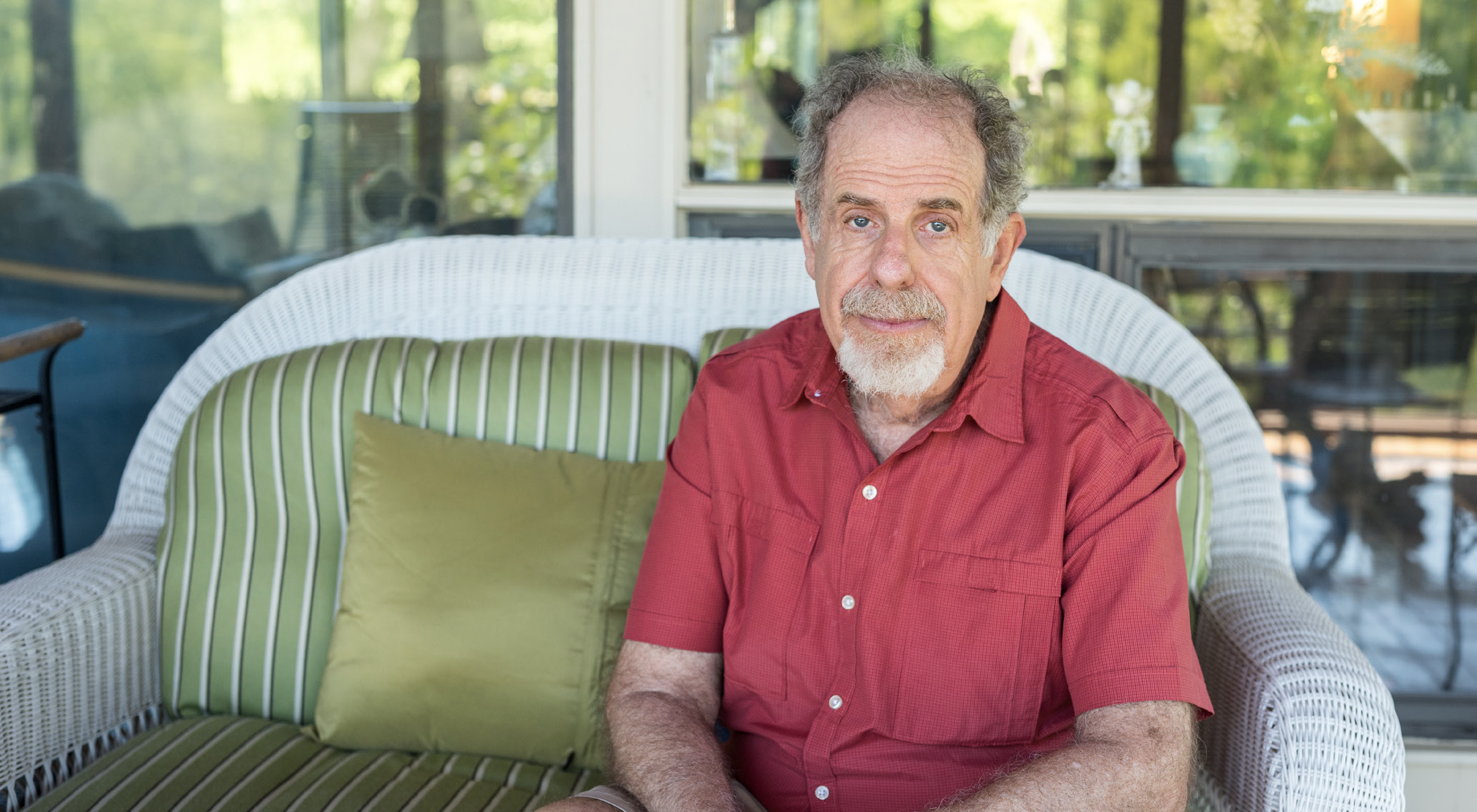 JESSE WALDINGER'S tumor was found during an eye exam. Fortunately, it was discovered early and his vision was saved. - PHOTO BY AMBER BAUHOFF
Jesse Waldinger had been putting off his annual eye exams because his vision wasn’t changing. He just didn’t think it was necessary to see an optometrist. When his vision started declining in 2017, he booked an eye exam, where he was stunned to learn he had a tumor in his right eye. The diagnosis was uveal melanoma.

Waldinger underwent plaque brachytherapy — a procedure that involves putting a temporary implant in the eye that delivers a concentrated dose of radiation to the tumor. There is no detectable cancer in his eye today.

“My vision is not back to normal. I cannot easily keep both eyes open when I read. But I can drive,” says Waldinger, 71, who also had a follow-up laser procedure to remove dead tumor tissue from his eye. “I am really lucky,” he says of his experience with uveal melanoma. “I had a tumor that was caught early.”

The uveal tract is made up of three regions, all of which are susceptible to melanoma. The first is the iris, the circular pigmented structure that governs how much light reaches the retina. Then there’s the ciliary body, which includes the muscles that help shape the lens. The third element is the choroid, a layer of the eye that contains veins and connective tissue.

Tumors that form in any of these regions are not related to skin melanoma, although both emerge from melanocytes, which are cells responsible for producing pigment.

The risk factors for uveal melanoma are still largely unknown. About 2,500 adults in the United States are diagnosed each year, most of whom are light-skinned individuals, according to the Ocular Melanoma Foundation. Men face a slightly higher risk. Most cases, including Waldinger’s, emerge from the choroid and appear out of the blue. But because uveal melanoma has been reported to run in some families, studies have been launched to identify genetic mutations that may be responsible for the disease.

The five-year survival rate for uveal melanoma that’s confined to the eye is 80 percent, according to the American Cancer Society (ACS). Radiation treatments like plaque brachytherapy are popular because they can be delivered straight to the tumor, sparing healthy tissue and preserving vision. Brachytherapy discs containing tiny radioactive seeds are implanted in the eye and then removed four to seven days later, according to the ACS, depending on the size of the tumor and strength of the radiation source.

“Plaque brachytherapy offers a greater than 90 percent likelihood of controlling the disease in the eye,” says Jasmine Francis, M.D., an ophthalmic oncologist at Memorial Sloan Kettering Cancer Center (MSK) in New York City. “It used to be that only the smallest tumors were eligible for radiation, but now we’re treating eyes with larger tumors, up to a maximum of about 22 millimeters in diameter.” Proton therapy and other external-beam radiation techniques are also used in some patients. Side effects can include eyelash loss, dry eye and cataracts, and some patients have vision loss in the treated eye months or years after treatment.

The ongoing refinement of radiation techniques is allowing more and more patients to avoid “enucleation,” the technical term for the removal of the affected eye. But patients with large tumors may be urged to have the entire eye surgically removed and replaced with a prosthesis. Some oncologists will try shrinking the tumor with radiation before surgery.


Half of patients with diagnosed uveal melanoma develop metastatic disease, which can be treated with chemotherapy given intravenously or directly in the eye. But in patients whose disease has spread, the five-year survival rate is just 15 percent. That’s why so much of the research in uveal melanoma is focused on treating and preventing metastasis.

About 90 percent of patients with metastatic uveal melanoma have tumors in their livers, which can be directly targeted with a variety of treatments. They include radiation, implanted beads that deliver the chemotherapy drug Adriamycin (doxorubicin), and transarterial chemoembolization, a procedure that involves cutting off the blood supply to liver tumors by inserting a material such as gelatin sponge into the arteries that feed them. A recent study of more than 600 patients treated over the last 45 years at Thomas Jefferson University in Philadelphia found that patients who received liver-directed therapies survived on average for 5.1 years — significantly longer than the 3.3-year overall survival (OS) rate of those who underwent intravenous chemotherapy.

Several drugs that stimulate the immune system to recognize and attack uveal melanoma are being developed, and some are showing promise in early studies. IMCgp100 is a “bi-specific” drug that combines two elements: The first is a T-cell receptor — a molecule on the surface of immune cells — that’s designed to home in on the antigen gp100, which is prevalent on uveal melanoma cells. The second is an antibody fragment that binds to cancer-killing T cells. “The drug binds to the cancer and it brings T cells within the cancer right next to the tumor cell. By doing that it causes tumor lysis, or cell death,” says Richard Carvajal, M.D., director of experimental therapeutics at Columbia University’s Herbert Irving Comprehensive Cancer Center in New York City and one of the clinical trial investigators for the drug.

In a phase 1/2 study presented at the American Society of Clinical Oncology (ASCO) Annual Meeting in June, patients with metastatic uveal melanoma who were treated with IMCgp100 had a one-year OS rate of 74 percent, with the median OS not reached and a median follow-up time of over 19 months. Sixty-six percent of patients survived for one year without seeing their disease progress.

In this trial, “the percentage of patients who were alive after a year was almost double what we would expect, based on historical controls,” says Carvajal. “So we’re seeing this really intriguing signal in terms of overall survival benefit, which we’ve not seen before with other drugs.” A randomized pivotal phase 2 trial is currently underway to confirm this benefit.

Another promising treatment for uveal melanoma is called adoptive T-cell therapy. This procedure involves taking tumor-infiltrating lymphocytes (TILs), which are immune cells that have a natural ability to recognize and kill tumor cells; growing them in a lab; and re-infusing them into patients. In a phase 2 trial published in 2017 in The Lancet Oncology, seven of 20 patients who had the procedure saw their metastases shrink. Liver tumors in one of the patients disappeared, with no signs of recurrence 21 months after the therapy. Another phase 2 study of TILs in metastatic uveal melanoma is underway at the University of Pittsburgh.

The University of Texas MD Anderson Cancer Center in Houston has started a phase 2 study of an adoptive T-cell therapy that involves removing T cells from patients’ blood and engineering them so they can target melanoma cells. Patients receive the T cells along with the chemotherapy drug cyclophosphamide and the blood protein interleukin- 2, which “is like Miracle-Gro for the T cells,” prompting them to make copies of themselves so they will continue to recognize and attack cancer should it recur, says Sapna Patel, B.A., M.D., assistant professor of melanoma medical oncology at MD Anderson. Although it’s designed to be a one-time treatment, patients who relapse may be eligible to receive a second dose of T cells, she adds.


Several trials are underway combining different methods of attacking uveal melanoma. For example, an experimental drug called indoximod that blocks indoleamine 2,3-dioxygenase — a checkpoint that normally prevents the immune system from recognizing and targeting cancer cells — is being tested with Keytruda (pembrolizumab), a programmed cell death protein 1 inhibitor approved by the Food and Drug Administration for other indications. A phase 2 trial examined the combination in 102 patients, 15 of whom had the ocular form of the disease. Data presented at ASCO showed an overall response rate of 55.7 percent to the combination, which was an improvement over the reported 33 percent overall response rate to Keytruda alone.

Treatments that target certain proteins that are prevalent in uveal melanoma are also being investigated, although they have mostly been disappointing so far. Carvajal recently led a phase 3 trial of the experimental drug selumetinib, which inhibits the enzymes MEK1 and MEK2, commonly found in uveal melanoma and other tumors. The trial concluded that adding the drug to the chemotherapy treatment dacarbazine did not improve progression-free survival for patients with metastatic disease. Carvajal is hopeful ongoing studies of the drug with different dosing schedules or other types of chemotherapy will produce better results.

Additional studies underway are investigating methods for limiting metastasis and preventing recurrence in uveal melanoma. For example, the lung cancer drug Xalkori (crizotinib), which addresses a defect in a gene called ALK, is in phase 2 trials in patients whose uveal melanoma is confined to the eye but who are deemed to be at high risk for metastatic disease.

Another trial is investigating the potential in patients at high risk for metastatic disease of the drug Sutent (sunitinib), which inhibits multiple cancer-promoting proteins. 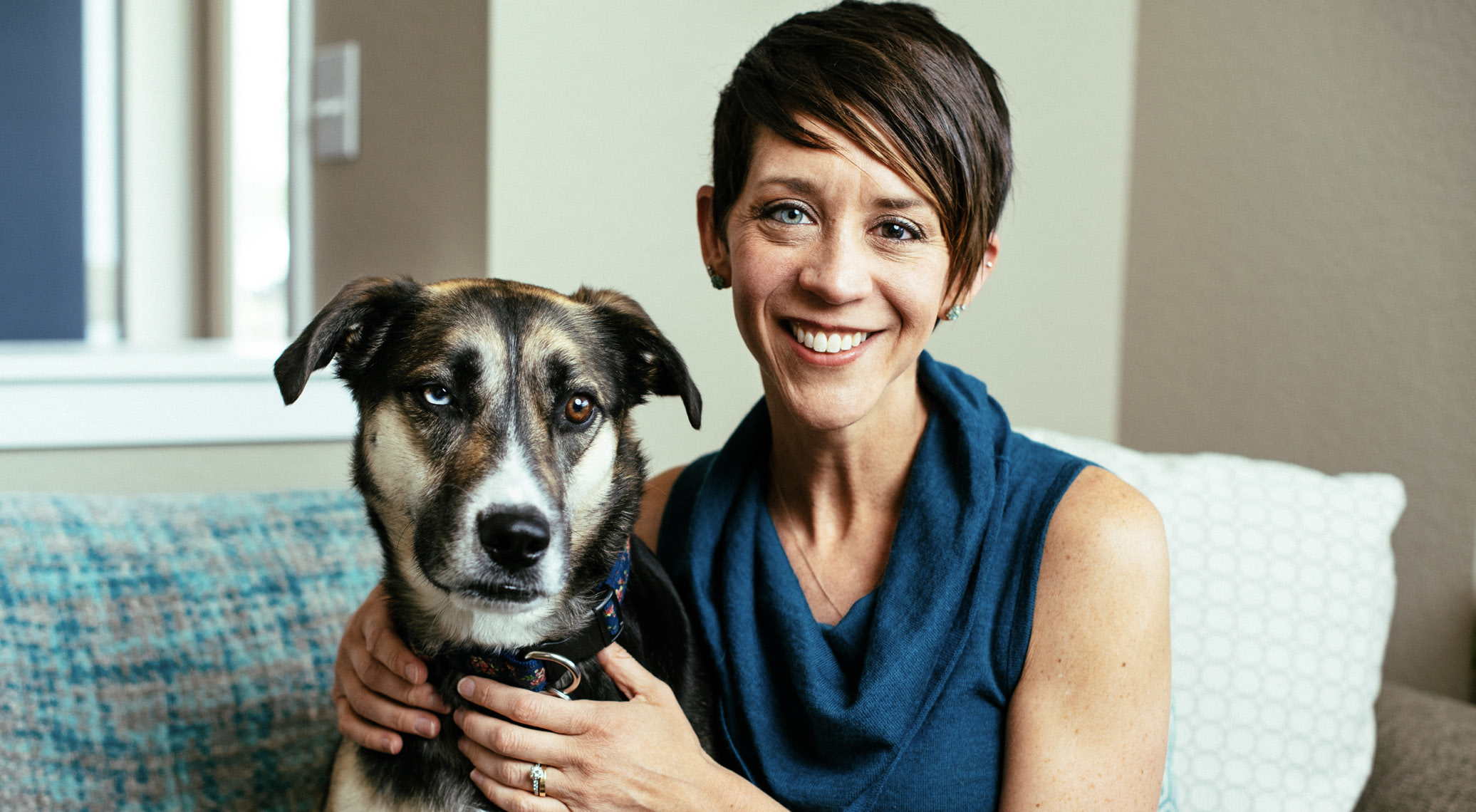 KATIE DOBLE and her dog, ALICE, have matching eyes. Doble's eye color changed to brown after a series of procedures related to her cancer. - PHOTO BY RYAN DEARTH
The proliferation of clinical trials in metastatic uveal melanoma has benefited patients like Katie Doble, who received her diagnosis in 2013. After multiple metastases were found in her liver in 2014, she participated in one trial of a MEK inhibitor, another combining two immunotherapies, and a third of an antibody called glembatumumab vedotin, which targets a protein called glycoprotein NMB that’s found in abundance in multiple tumor types, including uveal melanoma. Doble’s cancer didn’t improve as a result of the experimental treatments, so she received two treatments with radioembolization — radioactive particles delivered straight to the liver.

“I feel that the clinical trials bought me some time,” says Doble, 36, a vice president at an executive recruiting firm in Denver. Doble was married in 2015 and has screening images taken every three months. She took a break from therapy, but after metastases showed up in her brain in May 2018, she underwent gamma knife radiation to treat them.

As genetic sequencing technology advances, discoveries of mutations that drive uveal melanoma could point to new therapies. Some genes that drive the disease have already been identified, including BAP1, EIF1AX, GNA11, GNAQ and SF3B1. While being treated at MSK, Waldinger was tested for abnormalities in BAP1. He tested negative. “I have no doubt this was genetic” Waldinger says. “Even though they haven’t yet figured out what genes cause it and to what it extent, I believe it is hereditary.”
Continue the conversation on CURE’s forum. >>
Talk about this article with other patients, caregivers, and advocates in the Anal cancer CURE discussion group.