Cholangiocarcinoma, which affects the bile ducts, is most often diagnosed at an advanced stage and has a poor prognosis, so additional effective treatments are needed. In 35 patients with advanced cholangiocarcinoma, the researchers found that the pair of drugs — which, together, inhibit the growth-signaling proteins BRAF and MEK — was associated with an overall response rate of 42 percent, a median progression-free survival of 9.2 months and a median overall survival of 11.7 months, said Zev Wainberg, M.D., co-director of the UCLA Gastrointestinal Oncology Program. 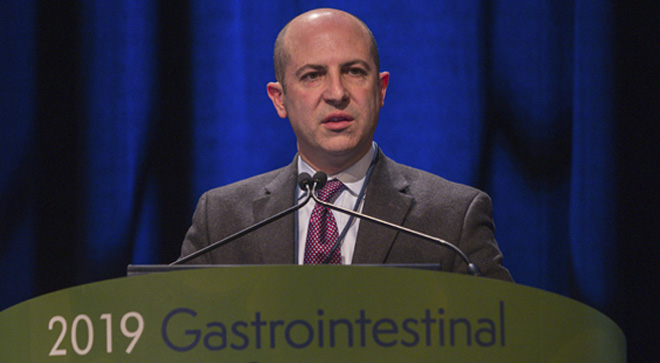 Overall response rate, the study’s main measurement, refers to the proportion of patients whose tumors remained stable or shrank; progression-free survival is the time from the beginning of treatment until the disease worsens; and median overall survival indicates the time from the start of treatment until half the patients in the group remained alive.

“Nearly every patient had some tumor reduction, with only four patients having progression of disease as their best response,” Wainberg said.

The combination’s efficacy is comparable with that of first-line chemotherapy containing gemcitabine and cisplatin, which, along with surgery, is part of the standard of care. Tafinlar plus Mekinist previously demonstrated efficacy in other BRAF-mutated cancers, including melanoma (in disease after surgery and melanoma that has spread), non-small cell lung cancer and anaplastic thyroid cancer. “These results represent the first prospectively analyzed cohort of patients with BRAF V600E-mutated biliary tract cancer treated with a combination of BRAF and MEK inhibition,” Wainberg said.

BRAF V600E mutations have been reported in up to 20 percent of cholangiocar­cinomas, according to the study’s authors.
At the time of data analysis, 12 of the 35 patients were still receiving both agents, but the rest had discontinued Tafinlar, Mekinist or both due to disease progression. Twenty-two and 21 patients, respectively, had to delay taking Tafinlar and Mekinist at some point during treat­ment. Side effects are a typical reason for dose delay.