Stephanie Seban explains the hurdles she faced as she received the wrong treatment for nearly five years.
BY Katie Kosko
PUBLISHED May 20, 2019
“Trust your gut” is not just an adage for Stephanie Seban — doing so saved her life.

At age 39, Seban is living with metastatic breast cancer and, she says, thriving. But it took learning that she had been misdiagnosed and received the wrong treatment for nearly five years, firing her oncologist and keeping faith to get herself to this place.

“When doctors give patients daunting statistics and messages based on fear, we (patients) harbor those messages and play them on repeat,” Seban said in an interview with Heal®. “Why not give us some hope to cling to? If we have to hear the worst-case scenario, why not also offer the best case?”

Seban focuses on the importance of obtaining second opinions; she attributes the problems related to her initial therapy to an inaccurate laboratory analysis. “My life has been altered by someone having a bad morning,” she said. “Maybe the pathologist who studied my tumor didn’t sleep enough the night before or perhaps they didn’t have their morning coffee. And their tragic mistake forever changed the course of my life.”

Seban’s initial cancer diagnosis came as a shock. In 2011, she had finally settled into her career as a teacher. Plus, she had picked up a second job working in high-end retail to help make ends meet in costly Los Angeles. “I was really busy working seven days a week,” she said. “Essentially, I was burning out.”

Seban didn’t notice any symptoms other than feeling a lump in her right breast. However, she dismissed it as a random premenstrual lump that would eventually go away. It didn’t.

Months later, a friend took a picture of the lump. Seeing it from that point of view, Seban realized she needed to get it checked. “My gynecologist was forthcoming,” she recalled. “She said, ‘I want to be honest with you. A cyst is usually soft and round, and this is not soft and round. I want you to go get a biopsy and mammogram.’”

She followed her gynecologist’s orders and was told her results would be ready in a week. But the next day her doctor called, telling her she needed to come in as soon as possible. “That’s when I asked if it was cancer,” Seban said. “I don’t remember much. It was surreal. You hear the word cancer and equate it to death. I (received a diagnosis) Monday and was in surgery on Wednesday. I got thrown into this cancer land.”

The diagnosis: stage 2 estrogen receptor–positive, HER2-positive breast cancer. While waiting for her insurance company to approve a positron emission tomography (PET) scan, Seban underwent a lumpectomy, followed by two surgeries to check for clear margins, making sure that no cancer cells were found near the edges of the healthy tissue. During a lymph node dissection, her doctor removed 22 lymph nodes — 13 had cancer. “We knew it had spread beyond the breast, but when I did the PET scan after the surgeries, that’s when a stage 2 diagnosis turned into stage 4,” she said. “They saw that I had a spot on my iliac bone.”

Seban didn’t rush into chemotherapy. She packed up her life and moved to Atlanta for six months to be with her mom. In Atlanta, she saw an oncologist who recommended a regimen of chemotherapy and Herceptin (trastuzumab), which targets HER2. “I asked him, ‘Have you seen good results with just Herceptin? And he said yes,” Seban recalls. She began Herceptin, but a scan conducted a few months later revealed it wasn’t working.

Acting on the advice of family and friends, Seban continued eastward. She traveled to New York City, where she would be treated by an oncologist at one of the city’s major cancer centers. “I knew on my first visit that it wasn’t going to be an easy appointment,” she said. “I looked like death on paper. But I made a promise to myself that day that no matter what she told me, I was going to continue to believe that I was going to be OK.”

Seban was given a 15 percent chance of beating her stage 4 cancer. Her first chemotherapy treatment was on Valentine’s Day 2012. For 3 years, she received different regimens containing Navelbine (vinorelbine), tamoxifen, leuprolide, Herceptin and Perjeta (pertuzumab), which also targets HER2. “It was a roller-coaster ride for a few years, but I was stable,” Seban said.

Then she noticed a new tumor growing in the same location as the first. Seban’s oncologist started her on T-DM1; Kadcyla (ado-trastuzumab emtansine), which was then a newer drug that targets HER2 positive breast cancer. But the tumor kept growing and became inflammatory. “I didn’t know what, but I knew something wasn’t right. It was like I had a monster growing outside of my breast,” she said.

Just before the summer of 2015, Seban recalled, her oncologist told her that the drugs were not working. Shortly afterward, Seban suffered a panic attack so severe that she drove herself to an emergency room, thinking she was having a heart attack. “I couldn’t breathe. I was sweating. I literally thought I was dying,” she said. “On my way to the hospital, I thought to myself, ‘OK, I talked to my mom today, my dad; everyone’s good. This is it.’”

Fearful of having another panic attack, Seban locked herself in her apartment for almost the entire summer. She prayed constantly, asking God to show her signs so that she could do whatever she needed to do to save her life. 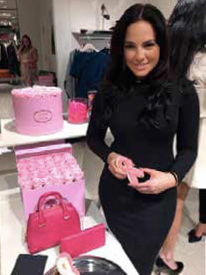 STEPHANIE SEBAN is an advocate for other women with breast cancer and runs her brand, Thrive Gang.

Seban then came across the book “Radical Remission: Surviving Cancer Against All Odds,” which presents the findings of Kelly A. Turner, Ph.D., a researcher and counselor in integrative oncology who traveled throughout the world to speak with holistic healers and patients with cancer who survived years after conventional treatment failed. “This book saved my life,” Seban said.

After reading it, she wanted to learn more about Chinese medicine. A friend told her about George Y. C. Wong, Ph.D., and an email later, she met with him in Queens, New York, and began taking a personalized concoction of herbs. She didn’t know it at the time, but this encounter changed the course of her treatment and her life.

Wong advised Seban to contact Patrick I. Borgen, M.D., chair of the Department of Surgery at Maimonides Medical Center in
Brooklyn, New York. She brushed off the advice several times but then felt compelled to reach out to Borgen.

During her first appointment with him, which her mom flew in to attend, Borgen asked, “Has your oncologist biopsied your new mass?” The answer was no. Borgen strongly recommended she ask her oncologist to conduct a biopsy of the new tumor; if the cancer had changed, that might explain why she wasn’t responding to treatment.

Her oncologist told Seban a biopsy wasn’t necessary and that she would be starting her on a chemotherapy regimen known as CMF — cyclophosphamide, methotrexate and fluorouracil. Seban began consulting with Borgen before meeting with her oncologist, and he suggested that Seban enter a clinical trial at The University of Texas MD Anderson Cancer Center in Houston. When her oncologist dismissed that advice, Seban decided to put her faith in Borgen.

“In that moment, I knew he was my guy,” Seban said. “He was thinking outside of the box, and he was willing to fight for me.”

Seban never began CMF or saw that oncologist again. Borgen performed a biopsy, and a week later, he revealed that testing on an archived sample showed that her original tumor was never HER2 positive — it was HER2 negative.

“Here I was sick as a dog. I had one doctor whom I had built rapport with telling me there was nothing she could do for me,” Seban said. “And Dr. Borgen told me he believed 10,000 percent (that) I was going to beat this. In my darkest hour, he renewed my hope.”

Borgen felt that stones had been left unturned. “I worked with George Wong for many, many, many years, and with (Seban’s) type of breast cancer — what we thought (she) had — I’d seen traditional Chinese medicines be effective. I didn’t think we were even close to the end of our road,” he said.

It was go time, Seban said. She didn’t have time to be angry. She chose to head back to Los Angeles, where Borgen connected her with oncologists at University of California, Los Angeles (UCLA), Jonsson Comprehensive Cancer Center.

Her new oncologist performed fluorescence in situ hybridization, commonly referred to as a FISH test, which proved that her tumor did not change; she had always been HER2 negative. He put her on Arimidex (anastrozole), leuprolide, and what was then a newly approved CDK 4/6 inhibitor, Ibrance (palbociclib). Her oncologist monitored the cancer via scans.

“It got really bad before it got better,” Seban recalled. The cancer had metastasized to both of her lungs, which began to fill with fluid. She spent every other day in the hospital to undergo a thoracentesis. After several weeks, the fluid began to go away, her breathing improved, and scans revealed the disease was stable.

Seban then faced her next big decision — this time in her personal life. Her boyfriend, who lived in New York, asked her to move in with him. “I was afraid because I finally felt safe at UCLA,” she says. “I had a doctor, and they knew how to treat me properly. But I thought, ‘I’m not going to live my life around cancer.’ I had found love. Even my oncologist said ‘Go!’”

In April 2018, Seban followed her heart and moved across the country for the third time, and she now sees an oncologist at Weill Cornell Medicine in New York City. Once a month, she receives a regimen of Faslodex (fulvestrant), Ibrance, Arimidex and leuprolide. “I live my life like anyone else who is living their life, except I have to check in and take pills,” Seban said. 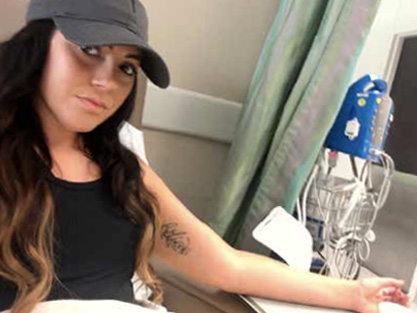 SEBAN uses a combination of traditional and complemetary therapies to treat her cancer and follows a vegan lifestyle.

Life with metastatic disease isn’t easy, but Seban focuses on gratitude. “Your mind-set is everything,” she said, “but a ‘fearless’ mind-set is not an easy place to get to. I had to practice — I still do every single day — to get my mind right. I make Post-it notes and stick them around my house with messages like ‘Thank you for my perfect health.’”

Cancer has also changed Seban’s relationship with food and exercise. She follows a vegan lifestyle and continues using Chinese herbs and taking supplements. Her regular workout routine includes yoga and jumping on a trampoline. Meditation, acupuncture and prayer help her keep a clear head.

Seban never returned to teaching. She serves as a mentor for other women with breast cancer and runs her brand, Thrive Gang, which offers handmade gifts and apparel for people with cancer. She is also writing a book called “The Thriver’s Guide: How to Heal and Live Your Best Life Beyond Cancer.” Borgen will pen the foreword.

Seban is thankful that she followed her gut instinct. “Recently, I had the revelation that throughout this journey, I have continuously been guided by something much bigger than myself,” she said. “I have never just done what I was told. Not to say I’m rebellious, but I let my own intuition, thoughts and feelings play a big role in my treatment. I never really was just a yes-girl. And thank God I wasn’t, because otherwise I wouldn’t be here.”
Be the first to discuss this article on CURE's forum. >>
Talk about this article with other patients, caregivers, and advocates in the Breast Cancer CURE discussion group.