In a talk to people affected by melanoma, Michael McGrady described reassessing his values after cancer and how it changed the course of his life.
BY Beth Fand Incollingo
PUBLISHED June 05, 2019
Cancer plowed through Michael McGrady’s life “like a two-ton wrecking ball,” leaving him to face intense fear and grief.

But in a single moment, the disease also changed the course of his life for the better. It presented the film, TV and theater actor with an almost mystical opportunity to reassess his values, and that was the best thing that ever happened to him, he told an audience of patients, survivors and caregivers on May 17. In telling his story at Penn Health’s 17th Annual Focus on Melanoma, he suggested that other survivors follow his example and treat cancer like “rocket fuel,” rather than letting it stand in the way of their life and goals.

McGrady’s life-altering moment came when he needed it the most: at 19,  finishing his first year of college after losing his father to melanoma a year earlier, hours before he graduated from high school. Now, he had the disease himself. Just out of surgery, he was lying in a hospital bed, waiting anxiously for a doctor to tell him if the procedure had been successful. 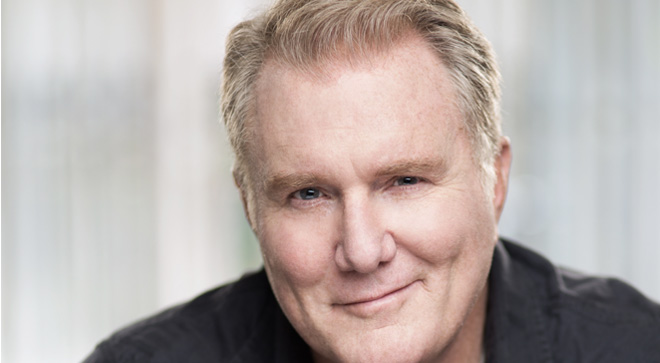 “The room was surreally quiet,” recalled McGrady, now 59. “I felt a presence in the room. It wasn’t an angel – it was in me. It was a quiet, inner still presence within me that stood outside my experience.”

McGrady believes he met his “authentic self” that day, instantly developing a reliable sense of intuition. “That’s been my safe place since that moment in time,” he said. “In every challenge and setback, amid all the chaos around me, I go there. I’ve learned to trust that voice.”

Armed with good news — his cancer had been fully removed, although he’d need surveillance over the next five years — McGrady left the hospital a different person.

“I felt as if I had aged 50 years,” he recalled. “I started asking questions that most 19-year-olds would never ask, like ‘What is life all about? Who am I? What’s important?’ I stopped going to parties because I didn’t relate to the atmosphere and the waste of time it all seemed. I never felt comfortable around my own age group. I’d bring up philosophical questions and yearn for deep conversations and they’d say, ‘Stop that and get another beer.’”

McGrady didn’t. Instead, he felt compelled to read the Koran, the Bible, the Tao, Shakespeare, Emerson, Thoreau – “existentialists searching for the truth.”

“I took a keen look around at how people were living their lives, and to my dismay was witnessing a majority of people complaining about life, their jobs or their partners,” he said. “I was thinking, ‘Wow, this (existence) is so sacred and fragile, and we live in denial, because there’s a shelf life and an expiration date to this life and we don’t want to think about it.”

The weeks that followed his diagnosis, filled with tears, had only solidified his own value system, which was to prize opportunities to do the things he loved: swimming, skiing, fishing, watching sunsets. “The things you’re going to miss (if illness interferes) are the things that are free in life,” he said. “It’s the truth — that’s why it’s a cliché.”

With a clean bill of health, McGrady vowed to live that philosophy. He dropped out of school — where he was studying business with aspirations of going into law school without any real passion for the subject. A series of serendipitous events led him to pursue acting in film and television.

“I beat cancer, and that taught me that I don’t have to fear anything,” he said. “I realized there’s a lot of fear in life and decisions we make that are fear-based, and it doesn’t have to be that way. That’s one of the greatest gifts cancer gave me.”

McGrady was 23 when he packed a bag and bought a one-way ticket to Los Angeles from his home state of Washington. “It was the craziest thing I ever did,” he said, “but I knew I was doing the right thing for me. Everyone else in my life thought monkeys were flying out of my ears.”

He doesn’t regret the decision, which led to him appearing on numerous top TV shows in the 1980s and 1990s, playing Lou Gehrig in the movie “Babe” and Frank Mangrum in the film “Diggstown,” and landing many other film and TV roles. More recently, he appeared for five years on Showtime’s “Ray Donovan” as Frank Mangrum, and he currently plays Captain Herrington on CBS’ “Seal Team.”

“In 36 years in the business, I haven’t stopped working,” McGrady said. “Less than 2% of actors in the Screen Actors Guild make over $10,000. I make, comfortably, six figures, and have since my 30s.For that I am forever grateful, and I do not take it for granted. I have been blessed to live my life the way I wanted to from an early age.”

In addition to rubbing shoulders with his industry’s most creative talents, McGrady’s career brings him joy by allowing him the time to pursue other interests.

Until three years ago, he competed in triathlons. A husband and father of three, McGrady holds two black belts in karate, is a wind surfer and sailor and has learned to remodel his own homes. He’s a self-taught painter whose work is sold in galleries, as well as an accomplished guitarist.

McGrady hopes his endeavors will inspire other cancer survivors to follow their dreams and aspire to a fulfilled life.

“Look at tall, majestic trees,” he suggested. “These precious gems are there because they had to weather a hostile environment. Big trees with deep roots win, and that’s what happens to you as a cancer survivor. You take the pressure cooker of life, and of cancer, and you make gold out of it by becoming a precious gem.”