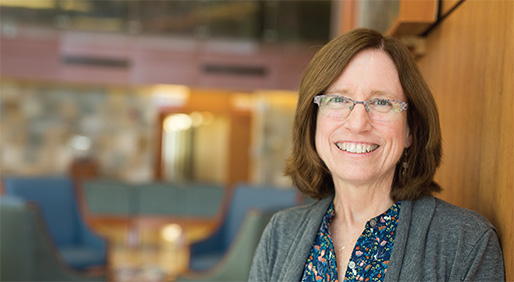 PATTY SPEARS was not eligible to take Herceptin when she was diagnosed with HER2-positive breast cancer in 2000, so she tried an experimental vaccine. - PHOTO BY ROBIN LIN
Patty Spears can’t say for sure what has kept any recurrence of breast cancer at bay for the last 16 years, but an experimental vaccine she received during a clinical trial in 2000 might have played a part.

In the summer of 1999, when she was just 40 years old, Spears was diagnosed with an aggressive form of breast cancer. A little over a year after a baseline mammogram that had revealed no signs of cancer, Spears had lumps that she could feel in her breast and under her arm. Within a week of reporting the lumps to her doctor, Spears had a mammogram, a biopsy, an appointment for her first round of chemotherapy and a consultation with a surgical oncologist.

“The tumor was as aggressive as it could be,” Spears recalls. “I had every negative prognostic marker. I was premenopausal. It was HER2-positive, highly HER2 expressing, and it was estrogen receptor-negative.

Today, Spears would have been a candidate for the game-changing medication Herceptin (trastuzumab), which treats breast cancers that overexpress the protein HER2, since her cancer was diagnosed at stage 2b. But at the time, only people with metastatic breast cancer received the drug. So, instead, Spears received eight rounds of chemotherapy, which included Adriamycin (doxorubicin), Cytoxan (cyclophosphamide) and Taxotere (docetaxel), followed by a bilateral mastectomy and then radiation.

While bilateral mastectomy significantly reduces risk of recurrence, Spears felt her risk was especially high and wanted to do more. A research specialist in microbiology at North Carolina State University College of Veterinary Medicine, Spears had her finger on the pulse of emerging science. A colleague in immunology told her about a family member who had avoided melanoma recurrence after receiving an experimental vaccine. Spears set to work to find a clinical trial for a breast cancer vaccine. She found one at the University of Washington in Seattle.

Spears flew to Seattle once a month for six months to receive an injection in her arm of a vaccine designed to prevent recurrence of breast cancers that overexpress the HER2 protein. This protein can cause breast cancer to grow faster, spread faster and come back. The early-phase trial evaluated the safety of the vaccine and whether dose impacted the immune system’s response.

Therapeutic vaccines belong to a category of cancer treatment called immunotherapy. Drugs of this type prompt the body’s own immune system to fight the cancer. Immunotherapy has raised a lot of excitement in recent years about the long-lasting positive results it has brought in non-small cell lung cancer and melanoma. But until recently, immunotherapy hadn’t seemed a viable option in the treatment of breast cancer. Success had not been seen in patients with metastatic disease, but now focus is shifting to early-stage breast cancer, where microscopic residual cells that can lead to recurrence may be more amenable to vaccine treatment. Now, with multiple clinical trials in progress, the prognosis for immunotherapy as a breast cancer treatment is looking better.

The term “vaccine” typically brings to mind inoculation against contagious illnesses like measles and the flu. Patients get an injection of just a little bit of the disease in question — not enough to make them sick, but enough to cause the immune system to spring into action. The system recognizes the foreign invader and creates antibodies against it, and that way, if and when the illness tries to invade in earnest, the body remembers how to fight it. Cancer vaccines, different from those that combat viruses, are intended to train the immune system to attack a disease that’s already present. The vaccines may contain cancer cells, parts of cancer cells, or tumor-specific or tumor-related antigens. Antigens are substances present in disease and illness that trigger your immune system to produce antibodies against the sickness. Tumor antigens appear on cancer tumors; vaccines can train the immune system to recognize and fight cells that contain those antigens.

“Many patients don’t have an underlying immune response (to cancer). Perhaps they don’t have mutations in their tumors that (elicit an immune response), so maybe one thing that could be done is to get a vaccine that would create an immune response,” says James Gulley, M.D., Ph.D., chief of genitourinary malignancies at the National Cancer Institute and an internationally recognized expert in cancer immunotherapy.

Some clinical trials are currently testing the benefits of NeuVax — for quite some time considered the leader in the breast cancer vaccine field. Similar to the vaccine that Spears received, NeuVax targets HER2-positive, also known as HER2/neu-positive, breast cancers, which overexpress the protein HER2. Trials are available for people with low to high HER2 levels. One trial is examining whether the vaccine can prevent recurrence of breast cancer in women who have already received standard care, but a similar phase 3 study, the PRESENT trial, was recently stopped because the drug wasn’t having its intended effect in patients.

Yet other trials of the drug will continue, including one that will look at the benefits of NeuVax in people who did not have a complete response to standard care. “It is possible that, with a combination, or with a different endpoint, one would see activity” with NeuVax, Gulley said.

Here’s how the vaccine works: A peptide — that’s a chain of amino acids — that is derived from the HER2 protein but made synthetically for the vaccine, trains the immune system to recognize and combat cells containing HER2, while a protein known as a granulocyte macrophage-colony stimulating factor (GM-CSF) gives the immune system a boost. In a phase 2 trial of NeuVax, more than 94 percent of those who received the vaccine remained disease-free for two years, compared to just over 86 percent in the control group. Researchers believe that this study underestimated the power of the vaccine, as 65 percent of those who received it got a dose smaller than what is now recommended. However, large randomized trials are needed to more definitively prove effectiveness.

Some vaccines target tumor-specific antigens that may be present in various types of cancer. PANVAC, which has completed phase 2 trials for breast cancer, targets carcinoembryonic antigen (CEA) and transmembrane glycoprotein Mucin 1 (MUC1). Early trials showed that the vaccine benefits some people with ovarian and colorectal cancers, as well. In an early trial run by Gulley, one patient’s metastatic breast lesion completely disappeared 18 months after she began receiving PANVAC, and now, after continuing to take the treatment every three months, she remains without evidence of cancer over eight years after starting treatment.

“She was quite young when she was diagnosed, which is one of the worst things for me to see. If we can give those people hope, that makes everything worthwhile,” Gulley says.

In Gulley’s phase 2 trial of PANVAC plus chemotherapy with docetaxel, the vaccine extended progression-free survival for four months over treatment with docetaxel alone in people with metastatic breast cancer.

A number of other vaccines are in phase 1 trials, including some personalized ones, in which a formulation is custom-made to target the particular antigens present in an individual’s cancer.

Perhaps the greatest potential for immunotherapy, Gulley proposes, lies in combining vaccines with other immunotherapy drugs, such as checkpoint inhibitors, which disable proteins that normally hold the immune system in check, thus giving the body greater power to fight a cancer. The vaccines may create an immune response in patients who did not previously have one, and then the patient might respond better to the effects of other immunotherapy drugs. “That might pave the way for what I think would be a more rational approach to treating patients with immunotherapy, and I think that’s the direction the field is going in,” he says.

However, some cancer cells carry PD-L1 proteins, too, which allows them to masquerade as normal cells and disarm the immune system so they can spread through the body unhindered.

Drugs that block checkpoint proteins, including PD-1, PD-L1 and CTLA-4, have brought about impressive results in melanoma and non-small cell lung cancer. Early clinical trials, though the results have been modest, show that these drugs might help some people with breast cancer, too.

In the KEYNOTE-028 trial, patients with advanced estrogen receptor-positive/HER2- negative breast cancers that express PD-L1 received Keytruda (pembroluzimab), a PD-1 blocking drug that’s FDA-approved for both melanoma and non-small cell lung cancer. Twelve percent of people who received the drug saw their breast cancer shrink and an additional 8 percent had stability of their disease. These benefits lasted from eight to 44 weeks.

In KEYNOTE-012, a later trial of Keytruda, people with triple-negative breast cancer received the drug, and 18.5 percent of those patients and participants in the trial with different kinds of cancer responded to it. The responses lasted from 15 weeks to more than 47. A trial of the experimental PD-L1 blocker Tecentriq (atezolizumab), which is now in phase 3 trials, had similar results.

“Triple-negative breast cancers may have a higher mutational load, and there’s more data that immunotherapy may be particularly effective in that setting among breast cancers,” says Ma.

It’s important to note that, while targeting PD-1 and PD-L1 in breast cancer are promising approaches, researchers still need a uniform method to test patients for these antigens. Besides PD-1- and PD-L1-specific medications, immunotherapy drugs that target CTLA-4 and other antigens are under investigation, too.

It’s still early days in the exploration of immunotherapy approaches to breast cancer, but numerous trials are enrolling and in progress. New strategies include combinations of different therapies, including those that stimulate the immune system through different pathways, and also designing tests to determine ahead of time who will respond best. It’s an exciting field where researchers and people living with breast cancer may soon see rapid development.

The progress of these clinical trials depends, in large part, on the one in eight women and one in 1,000 men who will get breast cancer in their lifetimes. The future of the science depends on these women and men to volunteer. “Volunteer for clinical trials if you can,” says Spears, who participated in another trial in 2006, six years after the vaccine trial. “It could help you, and you’re moving the science forward, too.”
Be the first to discuss this article on CURE's forum. >>
Talk about this article with other patients, caregivers, and advocates in the Breast Cancer CURE discussion group.